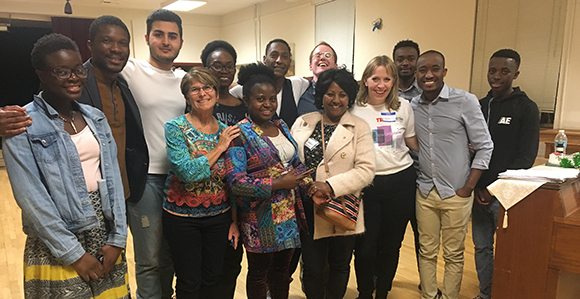 “Everyone can love someone and everyone needs love. It doesn’t matter where you’re from, we all need love.” — Erin Guinup, founder of the Tacoma Refugee Choir

With a singsong voice, Erin Guinup begins nearly every Tuesday evening with a vocal warm-up singing, “Hello, friend, how are you today?”

As members and participants of the Tacoma Refugee Choir filter into their practice room and form their typical singing circle, Guinup said she is never really sure who will show up. Their open-door policy means each of their weekly practices is different—but it matters little. Everyone is a friend, and everyone belongs, she said.

“There is a very family-oriented feel to Tuesday nights,” Guinup said.

Someone new comes almost weekly, and “when someone walks into the door, they feel that love immediately upon entering the door,” she said. “That’s probably the thing that I’m most proud of, is that we’ve gotten to a place where everyone feels empowered to be part of this movement of welcoming.”

One of Guinup’s favorite choir moments came when a Congolese woman with very limited English said, after her first night with the choir, that it had been her best day in America.

“It made me cry,” Guinup said. “I thought, ‘How simple is it to turn the tide for someone?’ It’s so simple, and sometimes we make it so hard.”

Turning the tide by welcoming strangers as friends is what the TRC is all about, Guinup said. In the two years since the choir was officially formed, it has evolved, but their purpose and mission has remained the same.

“Love, hope, and the power of community when that is present,” Guinup said. “That’s the mission of the choir.”

Three years ago, in March 2016, Guinup faced a lot of questions. As her children moved away from home, she began entering a new stage in life as an empty nester, and she wanted to know what God had in store for her next.

As general conference weekend approached, Guinup prayed she would receive answers to her questions, but she was surprised by how strongly an impression came to her.

The conference session featured a number of messages about refugees, Guinup recalled, noting the choir that performed at the women’s session of conference included many refugees (see related story).

“At the time I just thought, ‘Wow, what an amazingly cool thing,’” Guinup said. “But during that conference session, I felt very moved by the speakers and the counsel to do something local in our community.”

Initially, she said, she considered volunteering to teach English classes—something she had done earlier in her career. “But the very clear impression came that what I needed to do was something like the music that was on that program,” she said.

The impression to form a refugee choir kept coming to her, she explained, but she felt she didn’t know where to begin. “I mean, God might as well have asked me to build a boat,” she said with a laugh, recalling how she didn’t know a single person who was a refugee at the time.

But she figured she needed to start with the basics, so she looked up local organizations that worked with refugees and immigrants and began reaching out. That’s when she found the Tacoma Community House.

After contacting the TCH director, Guinup worked with the organization to plan a six-week choir program that would welcome refugees, immigrants, and community members to come together and sing. The program would culminate with a performance during National Welcoming Week that September.

“The idea was that, like at that [general conference], refugees and community members would come together to create this welcoming space where we could be supportive of one another,” Guinup said. But as that first week of rehearsal began, not a single refugee turned up, and Guinup was filled with disappointment.

“Then, in the last 30 minutes of our time together, two women walked in, and the energy in the room completely changed,” Guinup said. The two women, Sudanese refugees, were just the first. By the end of the six weeks, at least seven countries were represented in the group of about 22 participants, Guinup said. “So I felt really successful about that, and I thought we did our part.”

Feeling she had accomplished what she had set out to do, Guinup thought that would be the end of it. “I thought this was a small project, and I didn’t know how much more I could do,” she said. But after their first performance in September 2016, a choir member named Zamo, from Kurdistan, asked Guinup when they were meeting again.

“He had never sung before; he had been in the country for four months, and he was like, ‘This is my family; when are we getting together again?’” Guinup said. She then realized what the community she had formed meant to people and that she needed to keep going.

A new kind of family

In January 2017, the group was officially launched as the Tacoma Refugee Choir, and Guinup began dedicating more of her time to the choir. By August 2017, she began raising funds to turn the choir into an official nonprofit organization.

Learning how to start a nonprofit from the ground up proved to be a steep learning curve, Guinup said, but she noted that every time she had the desire to quit or give up, members of the choir would remind her why she was doing it and why it was important.

For Nathalie Bajinya, a refugee from the Democratic Republic of the Congo, the choir is what gave her a sense of belonging after coming to the United States.

“What people don’t understand is that when we come here from other countries, it is hard. It is hard here to make friends,” Bajinya said. “So when I found the refugee choir, I found friends. I found family, you know, because it was the first time I had anyone.”

Bajinya has been an inspiration for Guinup since the day they met. “When I was struggling so hard with the choir, Nathalie was the one saying, ‘Erin, we need this, you can’t give up.’ And she pushes me to be a better person. I am a better person because of her,” Guinup said.

But in truth, every member of the choir serves to inspire one another.

“The Tacoma Refugee Choir changed me,” said Mohamed Bangoura, a choir member from Guinea, who spent much of his youth in Cambodia before coming to the U.S. “When we’re singing, it’s like we’re praying for God to enjoy. Everybody loves each other there, and we can help each other out.”

Bangoura and Bajinya, both long-time members of the choir, have a sense of belonging because of the community they have formed and people they can turn to when they are in need of support, Guinup explained.

Standing in as family for those who don’t have family around them, the choir regularly throws baby showers for members, Guinup said, noting that when Bajinya gives birth in the next month or so, the choir will welcome its sixth baby since it started. Members of the choir additionally support one another by attending events like graduations and weddings.

The support helps people forget about their difficult pasts, Bangoura explained. “People stop thinking about the past, and it makes you feel not worried about your life and that everything is going to be better,” he said. “People have a lot of friends there and the potential to help you, whatever you need, because there, whenever you need anything, people will help.”

For many, the choir provides a sense of family and community that they wouldn’t have otherwise, Bajinya explained. “Most refugees, they miss [a sense of community], but in the choir it’s easy to talk to anyone,” Bajinya said. “Community is something important. We encourage each other. We need each other, and that’s what one of our songs says, is that we all need each other.”

Pulling from the lyrics of an original song composed by members of the choir, including Bajinya, Guinup said, “Everyone can love someone and everyone needs love. It doesn’t matter where you’re from, we all need love.”

During the process of forming the choir and turning it into a nonprofit, Guinup said she has relied heavily on her faith.

“I have often felt that anytime I can take lessons from my experience in the Church and apply it to this organization, it makes it a stronger organization,” Guinup said.

While the TRC itself is a secular organization with no church or religious affiliation, Guinup said she has made no secret that her faith and relationship with God is a large reason for why she started the organization and the message of love and welcoming that it represents. It’s a secular space informed by sacred things, Guinup explained, noting that her faith informs everything she does.

“There is no way I would be doing this if the Spirit wasn’t guiding me. It is too hard,” she said. “The very first thing I knew as a member of the Church—that we teach our nursery children—is that I am a child of God, and I feel that. I feel such a strong testimony of my Father’s love for me and of His love for all of His children, and that is something that I can reflect to others. I think that’s why people come back, is that they feel the love in the room. They feel that sense of community, and everyone needs that.”

People can accomplish so much when they are given a leg up, Guinup said. “The refugee members of our choir are some of the most inspiring people I’ve ever met. They are people who have overcome horrific tragedies and have used that to become their strengths. Their weaknesses have truly become their strengths.”

With Refugee Awareness Month beginning in June, Guinup expressed her excitement for the TRC’s upcoming concert and looking ahead to what the choir will do next. As she transitions to running the nonprofit full-time, she expressed a nervous excitement.

“This is a big step of faith for me. I’m going to be centering on prayer a lot to make this happen, but I feel like it’s time. It’s time to make the leap,” she said.

When she had the idea to start the choir three years ago, Guinup said she could never have imagined where it would lead, but she is grateful for the things she has learned and the people she has been able to teach and learn from since then.

“It’s a miracle that this organization has grown the way it has,” she said. “It’s nothing short of a miracle, and I’m really just so honored that this was something I was asked to do.” 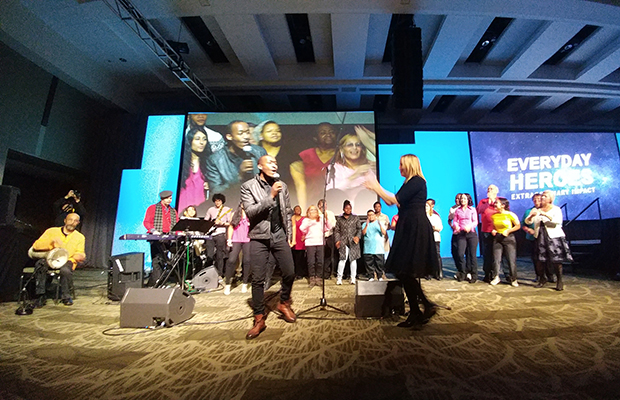 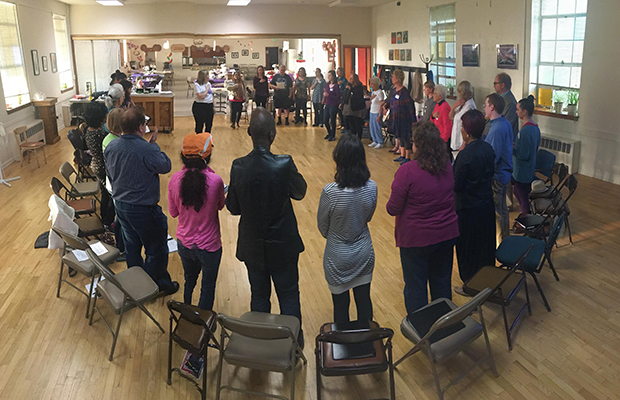 The Tacoma Refugee Choir stands in a circle during one of their rehearsals. Photo courtesy of Erin Guinup. 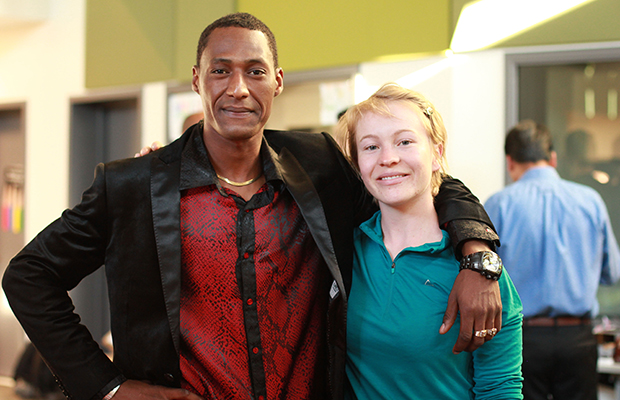 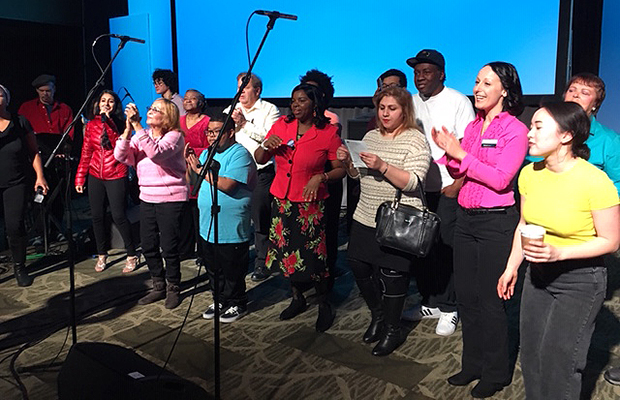 Members of the Tacoma Refugee Choir during a performance. 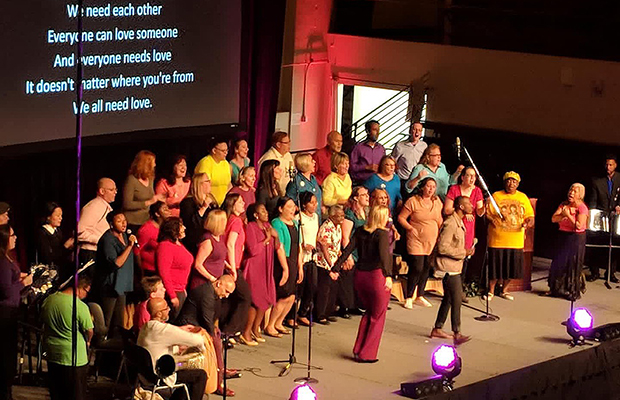 The Tacoma Refugee Choir at a performance. Photo courtesy of Erin Guinup. 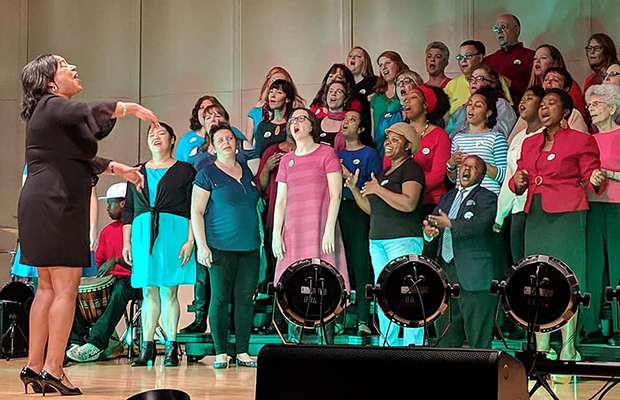 The Tacoma Refugee Choir sings on stage during one of their performances. 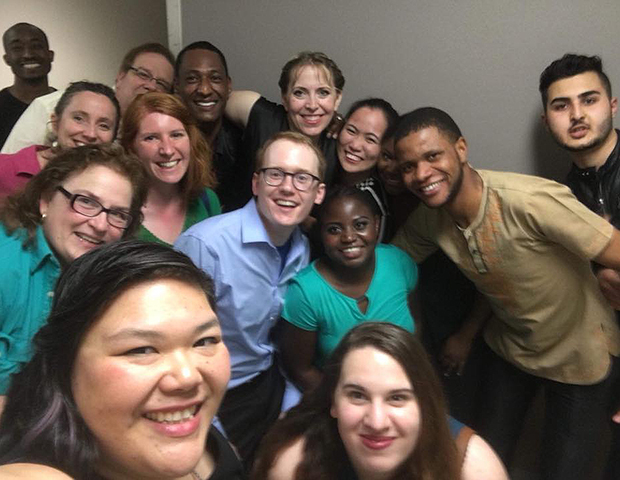 Members of the Tacoma Refugee Choir take a selfie following one of their performances. Photo courtesy of Erin Guinup.