L. Tom Perry Helped the People of Nagasaki to Rebuild Their City and Their Faith

Contributed By an excerpt from L. Tom Perry: An Uncommon Life, Years of Preparation, by Lee Tom Perry, Deseret Book, 2013 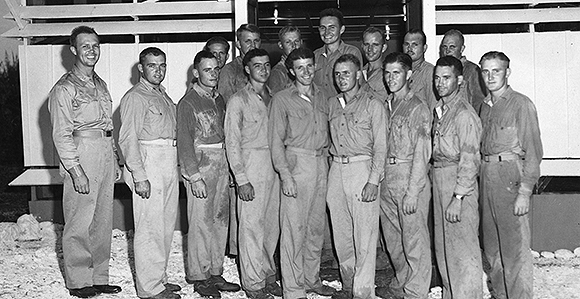 Tom Perry (back row, center) poses with other marines in front of a Saipan LDS meetinghouse in Japan in 1945. He and other soldiers helped rebuild Christian churches damaged during World War II in their free time.

“Up over a little rise near the train station came about 200 of these great Japanese Christians from the churches we had repaired, singing ‘Onward, Christian Soldiers.’” —L. Tom Perry, formerly of the Quorum of the Twelve Apostles

As their troop ship pulled into Nagasaki’s harbor in September 1945, L. Tom Perry and fellow U.S. Marines gathered at the rail to look over the city where the United States had carried out air raids and dropped, on August 9, an atomic bomb.

“I would never have believed the place could have been as completely destroyed if I hadn’t been there to see it,” he recollected. “We all thought the harbor district was bad, but as we got on the trucks to ride to our camp, we had to pass through the end of the atomic bomb district. There wasn’t one thing standing there—just a leveled city.”

Among the marines was one of Tom Perry’s companions from the Northern States Mission, Wendell Tolman. The two found many ways to help the Japanese people, including assisting orphans. In a letter home dated January 24, 1946, Tom wrote:

“We found a little boy on the streets the other day just about out of his mind from hunger. We took him back to our quarters, fed him, and cleaned him up. We then found one of the interpreters to see if we could find out where his home was. He used to live in the atomic bomb area, and all of his family were killed as a result of the bomb. Since that time he has been wandering around by himself eating and sleeping where he could find a place. We fixed up a place for him to stay out in the buildings behind our barracks and have been saving part of our chow for him. Today some of the other fellows found another. Now we have two and are wondering how many more are wandering around homeless.”

Tom and Wendell helped local clergymen open orphanages for some of the displaced children.

The two Latter-day Saints and some other marines, most also LDS, worked with local clergymen and their congregations to rebuild churches.

As they were about to return home, some fellow marines, whose Japanese girlfriends had gone to the train station to say good-bye, teased Tom and Wendell because they had no one there to see them off and give them gifts.

“Just as they were at the height of their teasing, up over a little rise near the train station came about 200 of these great Japanese Christians from the churches we had repaired, singing ‘Onward, Christian Soldiers.’ They came down and showered us with gifts. Then they lined up along the railroad track, and as the train started down the tracks, we reached out and just touched their fingers as we left. We couldn't speak; our emotions were too strong. But we were grateful that we could help in some small way in reestablishing Christianity in a nation after the war.”