Contributed By Julie Maddox for the Church News 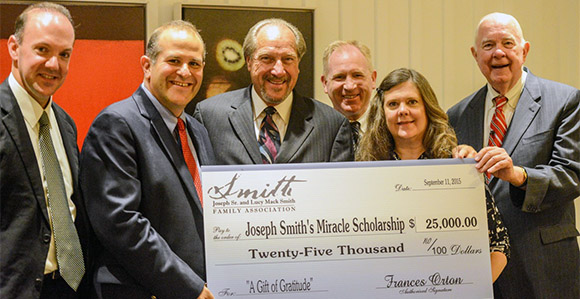 Richard C. Peck, director of gift planning, and G. Dino Koff, director of financial aid and assistant dean of student services at the Geisel School of Medicine at Dartmouth, accept a check from Dan Larsen, trustee; Steve and Frances Orton, chair of the Joseph Smith Sr. Family Association and trustee; and Karl Anderson, trustee and executive secretary for the association.

“If Joseph Smith were here he would absolutely say ‘Thank you.’ We felt it appropriate on the 200th anniversary of that surgery to offer a gift of gratitude to Dartmouth.” —Don and Laura Blanchard, Joseph Smith Sr. Family Association

To celebrate the 200th anniversary of the miracle surgery that saved 7-year-old Joseph Smith’s leg and, most likely, his life and to honor the doctor who created the surgery, the Joseph Sr. and Lucy Mack Smith Family Association presented the Joseph Smith Miracle Scholarship to the Dartmouth Geisel School of Medicine on September 11.

In 1813, when he was about 5 years old, Joseph Smith contracted typhoid fever, which he called typhus, which swept through Lebanon, New Hampshire, where his family was then living. Joseph recovered from the early ravages of the fever; however, during his convalescence, he developed a fever sore in his left leg, which resulted in bone infection and tissue decay. Because the infection would continue to spread, doctors recommended amputation, the standard procedure for the time, which they thought would spare Joseph’s life.

After Joseph, then 7, and his mother, Lucy, refused amputation, Dr. Nathan Smith agreed to perform an alternative procedure. It took three years for the leg to mend, but it gave Joseph the fortitude to endure the trials and challenges of the Restoration. The experimental but successful surgery was 100 years ahead of its time and is still used today.

“If Joseph Smith were here,” Don and Laura Blanchard of the Joseph Smith Sr. Family Association said, “he would absolutely say ‘Thank you.’” Family member Daniel Adams said, “We felt it appropriate on the 200th anniversary of that surgery to offer a gift of gratitude to Dartmouth.”

Dartmouth interim dean of the Medical School, Duane Compton, was pleased to accept the scholarship. “We are proud to have a founder as visionary and transformative as Dr. Nathan Smith. This generous gift in honor of Dr. Smith and the incredible surgery he performed on young Joseph Smith provides us the opportunity to remember an important part of our medical school’s history.”

Richard Peck, Dartmouth fundraising director, said the $25,000 current use scholarship “will be put to great use helping the students of today become the leaders of tomorrow. We are very appreciative of all the efforts making this possible.”

Karl Anderson, executive secretary of the Joseph Sr. and Lucy Mack Smith Family Association, read a letter from Elder M. Russell Ballard of the Quorum of the Twelve Apostles and a great-great-grandson of Hyrum Smith, brother of the Prophet Joseph Smith. The letter pays honor to Dr. Nathan Smith as a pioneer in medical treatments. “As a Church, we honor him for that,” said Elder Ballard. “We are grateful to Dartmouth College for preserving the legacy of this great surgeon and are pleased to make this modest donation to Dartmouth Medical School in his honor.”

Brother Anderson also read a letter from David Longcope, M.D., the fourth-great-grandson of Nathan Smith. Dr. Longcope participated in the 2013 Joseph’s Miracle Run, a fundraiser and commemoration in Salt Lake City. One of almost 500 participants, Dr. Longcope said he was honored to participate and could “not think of a better way to use the money raised than for use at Dartmouth Medical School. It will be called the Joseph Smith Miracle Scholarship.”

As an expert on Joseph’s leg surgery, Dr. Wirthlin explained that “the surgery was done in an unsterile environment, using unsterile instruments, and it worked.”

It was experimental because Dr. Smith had developed the technique. It was not widely used until World War I. Dr. Wirthlin also said that Nathan Smith had better results than the 1930 treatment reviews.

Dr. Wirthlin was unsure that Nathan Smith would feel it was a miracle because ”if one followed the proper procedure and cared for the wound properly, it would be right.” Dr. Smith was the most widely renowned surgeon in the Northeast and had been recruited by Yale.

The surgery, to most members of the Church, seems miraculous because Dr. Smith was there with the right skills and in the right place to perform the surgery. Today, the Smith family firmly believes that he saved Joseph’s leg and possibly his life.

Two of Joseph Smith’s descendants, Michael Kennedy and Daniel M. Larsen, were in attendance. Brother Larsen, a recent convert to the Church, gave tribute to Dr. Smith and then shared his testimony and the story of his recent conversion to the Church.

“Because of Nathan Smith and Joseph Smith, I am here today,” he said.

Sam Williamson, a Dartmouth employee and student, found the lecture “fascinating. Hearing it from a medical perspective really brings it to life,” he said.

Bishop Jonathan D. Jones of the Lebanon Ward, Concord New Hampshire Stake, concluded, “I hope the recipients will have the opportunity to hear this story and remember that God is the healer and those who serve Him in the medical profession will remember they are instruments in God’s hands.” 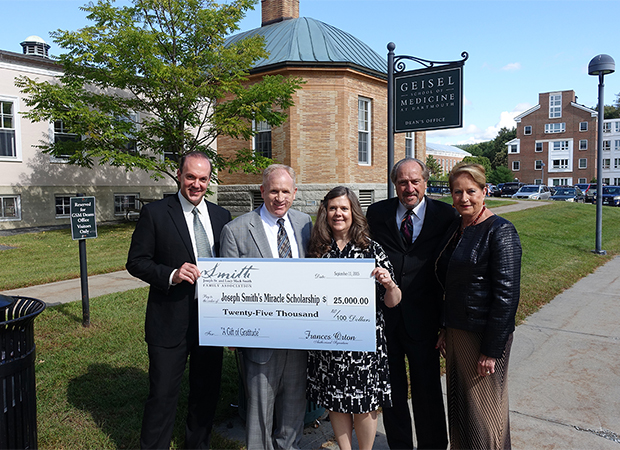 Richard C. Peck, director of gift planning at Geisel School of Medicine at Dartmouth, with Steve and Frances Orton and Dan and Rosemarie Larsen. Photo by Elder Michael Lantz. 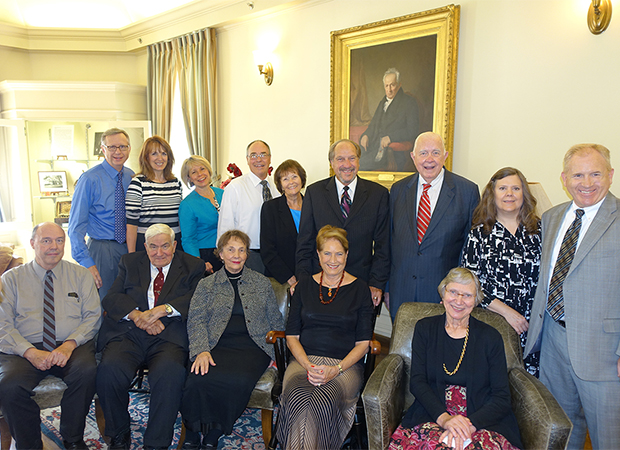 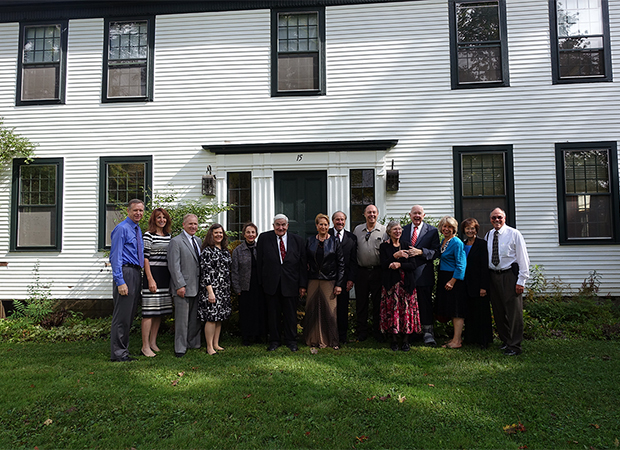 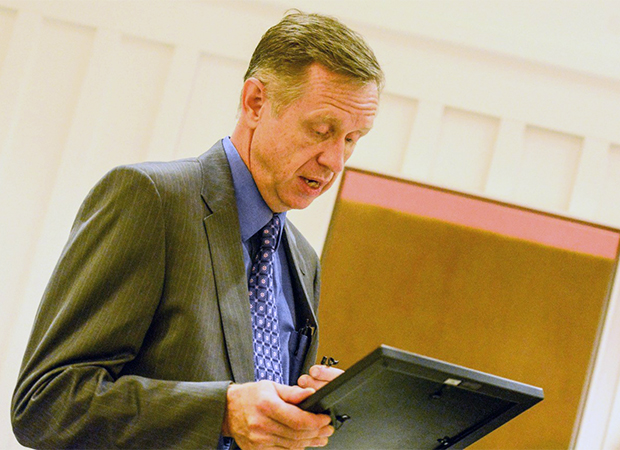 Daniel Adams, a member of the Joseph Smith Sr. and Lucy Mack Smith Family Association, reads the proclamation issued in gratitude for the role Dr. Nathan Smith had in saving the leg and, most likely, life of 7-year-old Joseph Smith. Photo by Angela Hughes.