“It Rained, though the Ground Was Not Wet” 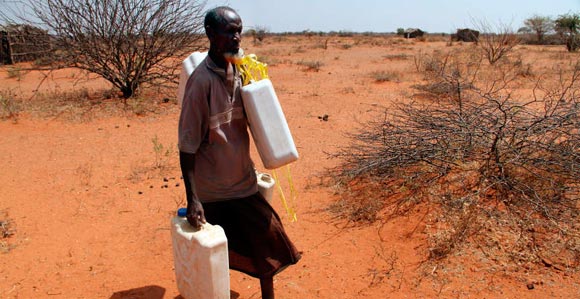 “The Church does these projects because it believes that’s the right thing to do, the Christian thing to do. There is no quid pro quo. It’s simply about trying to do good in the world.” —Lynn Samsel, Church Welfare Services

The chief sits on the hard ground and gazes out at the barren, dry land before him.

Deep in the Horn of Africa, he is miles from any civilization. The only thing he can hear is the wind whistling across the desert and the braying of his goats in the distance.

The chief is named Ahamd Issaq, and for generations his people have called this village Sala-Jama. It sits in the Dolo Ado region of Ethiopia, about 90 miles (145 km) from the border of Somalia.

Last year, this village was running out of water. Issaq lay awake at night wondering what to do. The region is known for its salt mines, and as the water table dipped, even the rivers the villagers drink from became salty, making the children in the village sick as well as the livestock. Issaq contemplated moving his village but knew that they would lose up to half their goats in the perilous journey.

Then, one day, a water truck arrived in Sala-Jama. To the chief, and the rest of the village, it was an answer to prayer. “It rained, even though the ground was not wet,” one of the villagers said.

Isaaq points to a large 500-gallon (1,900 liter) water tank. When the drought was at its peak, the water stored in these tanks saved the lives of the villagers, he says.

The water came from trucks paid for by the Church. The village of Sala-Jama is one of 22 sites along the border of Ethiopia and Somalia that received water last year through a partnership between the Church and a charity called International Relief and Development. That effort—along with the 5,000 hygiene kits prepared by local members in Ethiopia—was part of a coordinated response to the drought in East Africa and just one of 111 emergencies and disasters the Church responded to last year in 90 countries.

Besides trucking water to villages along the border, the Church also worked with IRD to get medicine to hospitals in Somalia, and partnered with another charity, called International Medical Corps, to improve conditions in Ethiopian refugee camps, where thousands of starving Somalis have fled for food and help in response to the worst famine the Horn of Africa has seen in 60 years.

The camps are small cities. One camp where the Church is working, called Melkidida, has a population of 40,000 people. While families live in tents, life marches on: children fly kites and gather wood for cooking fires, and marriages are made.

The Church is involved with three projects in the camps: a hygiene and sanitation effort that has brought the number of people per latrine down from 151 to 31; the building of four community nutrition centers, where families come to gather food rations; and a brick-and-mortar women’s center, where mothers and young women can come for support and job training. Many of the refugees who have fled Somalia are widows who made the trek with their children.

“The whole idea is to relieve suffering where we find it, foster self-reliance, and provide an opportunity for service,” said Lynn Samsel of Church Welfare Services.

Since 1985, when LDS Charities first responded to a drought in Ethiopia, the Church has provided more than $1.4 billion in assistance to nearly 30 million people in 179 countries.

“It’s amazing how quickly members respond,” Brother Samsel said. “In Chile after the earthquake, members took their own food storage and shared it with their neighbors. They cooked breakfast and shared it with neighborhood children. In Japan we had 25,000 members donate more than 122,000 hours of service.”

In the village of Sala-Jama, the chief knows little about the Church, and he has never seen a missionary. “The Church does these projects because it believes that’s the right thing to do, the Christian thing to do,” Brother Samsel says. “There is no quid pro quo. It’s simply about trying to do good in the world.” There are no members of the Church near the Somali border. In fact, the nearest LDS chapel is hundreds of miles away in the Ethiopian capital of Addis Ababa. But the influence of the Church is present here: the chief wears a pink hand towel on his head that he got from a hygiene kit prepared by members of the Church in Addis Ababa. The towel had another designed purpose—to improve the hygiene of villagers in the remote and primitive stretches of the country—but here in Sala-Jama the chief and most of the other men have found that it works just as well as a head covering to protect their skin from the scorching African sun.

“I would thank those who did this work,” the chief says. “It has saved lives.”

Looking to the future, the village of Sala-Jama is now building an underground water storage tank, or birkit, the size of a large swimming pool that will catch rainwater. The Church is partnering with IRD to build these birkits in 10 villages in the area.

“Everything we do grows out of building dignity, self-reliance, and self-respect,” said Peter Evans of Church Welfare Services. “So when we get to a certain area, when there’s a request for help, we’re looking for long-term partners and we’re looking for sustainable solutions to problems that matter to those who live there.”

Isaaq says the project has given the people of his village a sense of empowerment and control over their lives. And because they are doing the work of digging out the birkit, they feel a sense of ownership. When the next drought comes, he says, the village will be ready.

In a hut made of twigs nearby, a mother stands at the entrance with her small children, who walk barefoot in the dirt. Like the chief, the mother used to lie awake at night worrying about her small children, who were often thirsty and sick. She prays for more rain and can’t help but worry about the next drought. But for now, her prayers have been answered.