Iosepa Made Desert Blossom as the Rose

Historical archaeologist Benjamin Pykles tells of his excavation of Iosepa townsite. He uncovered artifacts telling of a people of faith and blended cultures.

“They [drew] upon their traditional cultures, but also upon their newfound Mormon faith, blending these in a special way to make the place meaningful and significant to them.” —Benjamin Pykles, historical archaeologist

By blending aspects of their culture with their newfound faith in the restored gospel of Christ, Pacific Islanders in turn-of-the-century Utah brought literal meaning to the scriptural imagery of making the desert blossom as the rose.

That was the assessment of Benjamin Pykles, a historical archaeologist who spoke July 11 in the Assembly Hall on Temple Square in Salt Lake City for the monthly Men and Women of Faith Lecture Series sponsored by the Church History Library.

Brother Pykles, while an assistant professor of anthropology at the State University of New York at Potsdam, researched and did archaeological expeditions at the site of Iosepa, a Pacific Islander colony in Skull Valley, Utah, in the desert west of Salt Lake City. Today, he is a historic sites curator with the Church History Department.

He traced the brief history of the town, named Iosepa in honor of President Joseph F. Smith, beloved by the islander Latter-day Saints for his work among them as an early missionary at age 15. Iosepa (pronounced “yo-SEP-uh”) means “Joseph” in the Hawaiian language.

“As was true with most converts of the 19th century, they were encouraged to emigrate to Zion here in Utah,” Brother Pykles recounted. “They first began to settle not far from here, at the hot springs on Beck Street north of Salt Lake.”

Unfortunately, they did not integrate well with the local Church members of mostly European background, and the Church formed a committee to look for a place they could call their own. Ultimately, the Skull Valley site was selected, though it was in the west desert, because of the availability of irrigation water from the Stansbury Mountains to the east.

The site was settled beginning August 28, 1889, and the date was celebrated as their Hawaiian Pioneer Day from that time forward.

Despite its beginnings during the depression of the 1890s, the town eventually flourished. But it didn’t last long. In 1915, it was announced that the Church would build a temple on the Hawaiian island of Oahu at Laie.

“When that announcement came, as you can imagine, some of the Pacific Islanders at Iosepa wanted to go back and help build that temple,” Brother Pykles said. “So they did, and it started a movement. By 1917, there were few remaining.”

The town was finally disincorporated and the land sold to a ranching company that razed most of the buildings. Today, a well-maintained cemetery is one of the few visible signs of the town that once thrived there.

“As I began my research at Iosepa, I knew that one of the biggest obstacles was going to be to figure out where things were on the landscape,” Brother Pykles said. “There are a few foundations that still survive, and they’re overgrown with sagebrush and cheatgrass.” 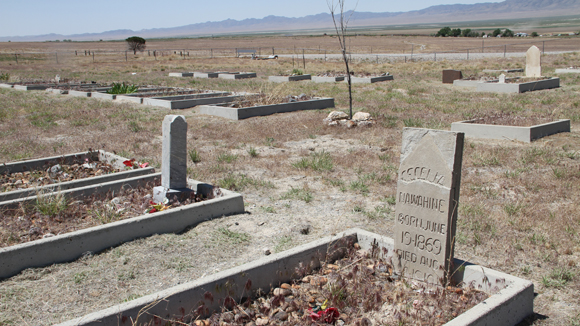 Town cemetery with its grave markers is one of the few visible signs of the once-thriving Iosepa, some to LDS colonists from the Pacific Islands who had immigrated to Utah in the late 1800s. Photo by R. Scott Lloyd.

Early on, he went to the courthouse of Tooele County, in which Iosepa was located, and got a copy of the plat map for the town. The layout was typical for Mormon communities of the day, with streets at right angles emanating from a large public square.

With help from the county surveyor, he found two stone monuments that mark the positions from which the town’s streets and lots were surveyed. With those positions, and using the county’s global positioning satellite system instruments, they were able to re-create the town plat on the landscape.

“All of a sudden, the landscape came to life,” he said.

Brother Pykles also worked with some original deeds from the Iosepa settlers.

“Now we knew where these blocks were, where the lots were, and now we even knew who lived on them,” he said.

Conversing with descendants of some of the settlers, Brother Pykles was able to get a picture of what life was like in Iosepa, “how these people took what was available to them and made it meaningful in their own very significant ways, drawing upon their newfound faith, Mormonism, and drawing upon their traditional cultures from the Pacific Islands.”

For example, the central square, a counterpart to Temple Square in Salt Lake City, was called Imilani Square, a name which means in Hawaiian “to seek God or the heavens.”

The avenues, which run east and west, were named after specific places in the Hawaiian Islands, many of them locales from which the settlers came and were baptized, names such as Waimea, Honolulu, and Laie. Streets that ran north and south were named for people significant to the Pacific Islander Latter-day Saints. The main one, for example, was named Napela Street for Jonathan Napela, one of the earliest Church converts in Hawaii, who, with Elder George Q. Cannon, translated the Book of Mormon into Hawaiian.

Working with archaeology students from SUNY Potsdam, Brother Pykles excavated blocks in the townsite in 2008 and 2010, including one that had belonged to the family of John Mahoe. He got to know some of the family’s descendants and viewed photographs of the parents and some of their nine children.

Using ground-penetrating radar, they determined where to dig. They didn’t find much in the way of artifacts until they unearthed what was determined to have been a privy. Because of the wealth of artifacts in the 6-foot pit, “it was an archaeologist’s dream come true,” he said. Items included broken bottles, dishes, food remains, and clothing remains.

One of the artifacts was a piece of clear, broken glass. A patent date on the glass showed that it had been a nursing bottle.

“That would be interesting in and of itself,” he said. “But when you add the story of the Mahoe family to this artifact, all of sudden you know how wonderful this little piece of glass is. This is a nursing bottle that would have nourished one of those eight daughters and one son that were born to John W. Mahoe, who lived in Iosepa.”

Brother Pykles and his team found a different sort of artifact in the form of a boulder in the Stansbury Mountains in a location overlooking the townsite. On the boulder are petroglyphs, rock art carved by Iosepa residents.

“You go to the Hawaiian Islands and you can see rock art all over the place, so it’s not a foreign idea to peck figures into rocks,” he said. “But as far as I know, there is not another place in the state of Utah, or anywhere at all, where you have Hawaiian petroglyphs in a desert setting.

The art reflects the blending of cultures. One shows human figures in a circle holding hands.

“Rock art is notoriously difficult to interpret, and I’m sure we could come up with a hundred interpretations,” he said. But the one he prefers and that resonates with the Iosepa people’s descendants with whom he has conversed is the cultural concept of ohana, the notion of family. “Not a family in the sense of mother and father and children, but an extended family community,” he explained.

Another rock art drawing shows a sphere depicting the earth with the western coast of the United States, three dots to the left believed to be the Hawaiian Islands, and one dot inland presumed to be Salt Lake City.

Yet another figure shows the Big Dipper constellation.

“Hawaiians were a seafaring people,” Brother Pykles said. “They used the Big Dipper to locate the North Star as they crossed miles of open water with no land in sight. … Also, remember the Mormons carved their own Big Dipper in stone on the west tower of the Salt Lake Temple, for much the same reason: because the temple in Mormonism is a place of guidance, of finding one’s way in life.”

He added, “So again we have these parallels and these connections, where they are drawing upon their traditional cultures, but also upon their newfound Mormon faith, blending these in a special way to make the place meaningful and significant to them.”