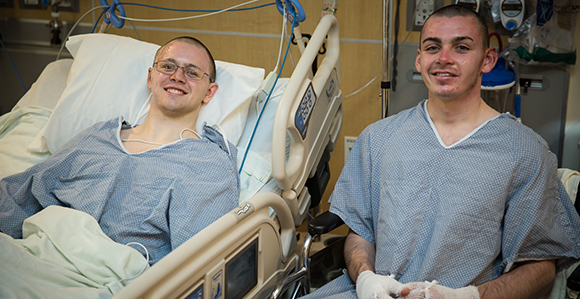 Mason Wells, left, and Joseph Empey, right, saw each other for the first time since the bombing in Brussels at University Hospital in Salt Lake City. Photo © University of Utah Health Care.

A pair of missionaries injured in the March 22 terrorist bombing in Belgium have returned to their home state of Utah to continue their recovery.

Elder Mason Wells, 19, of Sandy, Utah, and his companion, Elder Joseph Empey, 20, of Santa Clara, Utah, are being cared for at Salt Lake City’s University Hospital.

Elder Wells is in the hospital’s burn unit where doctors are performing skin grafts on his left ankle and a hand, the Deseret News reported. He was originally admitted to the intensive care unit before being moved to the burn unit. He has been honorably released from missionary service.

Elder Empey, who suffered burn and shrapnel injuries in the bombing at the Brussels airport, has also been honorably released from his calling.

Elder Wells’s and Elder Empey’s harrowing experiences have been the subject of stories and reports from several national news agencies. Both were at the airport, along with Elder Richard Norby and Sister Fanny Clain, when the bombs detonated. All of the missionaries demonstrated grace and selflessness in the aftermath of the attack.