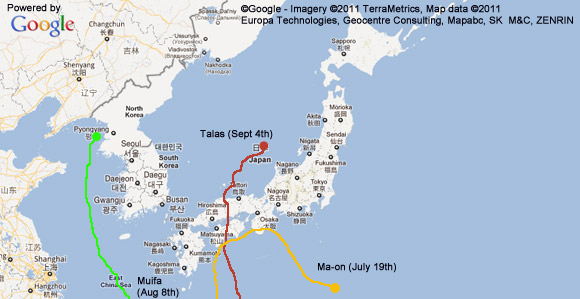 In the past three months, three typhoons have hit Japan. The most recent, Typhoon Talas, made landfall on September 4, 2011.

On Saturday, September 4, 2011, Typhoon Talas made landfall in Japan with heavy rain and winds of up to 68 mph (108 km/h), killing at least 59 and affecting thousands more.

Typhoon Talas comes on the heels of two other typhoons that hit Japan this summer—Typhoon Ma-on (July 19) and Typhoon Muifa (August 8).

The destruction has added to the conditions still remaining from the catastrophic 9.0 earthquake and tsunami that struck the country just six months earlier on March 11.

Local priesthood leaders are evaluating the status of Church members in the affected areas and LDS Humanitarian Services is sending a disaster response manager to Japan to assess damages and gather information.

But in the meantime, many who have been affected by earlier disasters are turning their hearts and their hands to those who are dealing with the effects of the landslides, heavy rainfall, and flooding caused by the typhoon. The Kii peninsula in central Japan was the most heavily damaged area.

Rescue teams composed of both professional rescuers and volunteer residents continue to search for dozens of missing people throughout western and central Japan. According to the Fire and Disaster Management Agency, some 3,000 are still sheltering in evacuation centers in the wake of the storm. Talas has been called the most destructive typhoon since 2004.

In many areas, local officials are preparing relief supplies and support for community members. Firefighters, police, and soldiers have responded by clearing debris from roads to aid in the distribution of relief. Many roads damaged by the storm have now been restored.

Donations of food, water, medicine, and other supplies are being delivered by helicopter to communities still cut off by landslides.

On September 9, the Japan Meteorological Agency issued a heavy rain and mudslide warning for several municipalities already dealing with flooding and sodden ground.

Typhoon Talas first emerged as an area of low pressure west of Guam on August 22. As it headed toward Japan, it strengthened into a typhoon.

Tokyo’s BNO news stated: “[Typhoon Talas] made landfall over Kochi Prefecture on early Saturday and then tore a path of destruction through western Japan as it moved toward the northeast.

“Talas is the 12th named storm, the 7th severe tropical storm, and the 5th typhoon of the 2011 Pacific typhoon season. The season runs throughout 2011, with most [storms] forming between May and November.”

Typhoon Talas has now been downgraded to a tropical storm.