“I Put My Arms around Them,” President Ballard Shares after His Visit with Toronto, Ontario, Saints

President M. Russell Ballard, Acting President of the Quorum of the Twelve Apostles of The Church of Jesus Christ of Latter-day Saints, speaks at the Brampton stake center in Brampton, Ontario, Canada, on March 8, 2020. Photo by Hyungwon Kang, Deseret News.

“When you develop friendships in the Church, it is more than just friendship. There is a kinship, a bonding that is not only physical but spiritual.” —President M. Russell Ballard

President M. Russell Ballard entered the home where he lived four and a half decades ago as president of the Ontario Toronto Mission and paused in the doorway of his old office.

The furnishings and finishes were different, he explained, but the memories flooded back anyway.

Now 91, the Acting President of the Quorum of the Twelve Apostles recalled the miracles, the bonds forged with missionaries and members, and the power of his wife’s smile. When she smiled, “no one even remembered I was in the room,” he said.

President Ballard and his late wife, Sister Barbara Ballard, moved to Toronto 46 years ago with six of their seven children. President Ballard returned March 6 through 8 to participate in leadership and member meetings, connect with old friends, visit the mission home where he and his family lived, and preside over the Brampton Ontario Stake conference.

Accompanied by Elder L. Whitney Clayton of the Presidency of the Seventy; Elder Allen D. Haynie, General Authority Seventy and First Counselor in the North America Northeast Area Presidency; and Elder Michel J. Carter, an Area Seventy, President Ballard addressed missionaries serving in this thriving provincial capital and shared what he learned as a mission president.

“You are not teaching lessons,” he told the 200 elders and sisters. “You are teaching God’s children.”

Great missionaries teach with understanding, with feeling, and with the power of the Spirit, President Ballard added.

“Radiate the love that you have for the Lord Jesus Christ.”

“The Church Is Here”

The Ontario Toronto Mission home sits on 1.5 acres in a central location of this city with deep Church roots.

Between 1830 and 1850, an estimated 2,500 Canadians joined the Church here. Qualified and educated, those early Latter-day Saints made significant contributions, said Helen K. Warner, a pioneer member who has researched and compiled local Latter-day Saint histories.

Joseph Smith himself visited the area in October 1833 and again in August 1837—the only two times he left the United States.

In addition, Elder Parley P. Pratt found and converted John Taylor, who introduced him to Joseph Fielding and his sisters, Mary Fielding and Mercy Fielding.

And a branch of the Church thrived in Churchville—located about 25 miles northwest of downtown Toronto—between 1837 and 1840, Warner added.

However, most of these early members left Ontario to gather with other Latter-day Saints in the western United States. By 1861, fewer than 75 Church members remained in Ontario.

It was almost eight decades later before the Church dedicated the first Latter-day Saint meetinghouse in Toronto in 1939. The first stake was organized 20 years after that, in 1960—while President Thomas S. Monson was serving as president of the Church’s Canadian Mission, headquartered in Toronto.

Today there are nine stakes, two districts, 53,000 members, and a temple in Ontario. Two of those stakes were created while President Ballard was serving as mission president.

“It is one of those things,” said Michael Finnigan, the patriarch of the Brampton Ontario Stake. “When you are living it day to day, you don’t see the growth. When I was baptized [in 1953], there were no stakes in Ontario at all—just districts in the mission.”

Members drove first to Cardston, Alberta, or Idaho Falls, Idaho, and then to Washington D.C. to attend the temple. Back then, he said, it was “unthinkable that there would be a temple in Ontario.”

“Now we feel like the Church is here,” he said. “It is respected.” 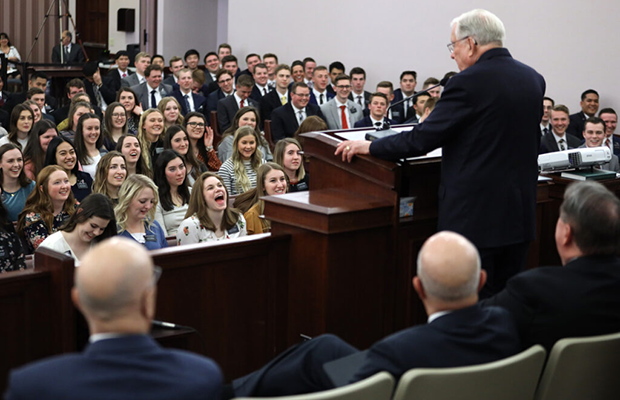 President M. Russell Ballard, Acting President of the Quorum of the Twelve Apostles of The Church of Jesus Christ of Latter-day Saints, speaks to missionaries at the Brampton Ontario Stake Center in Brampton, Ontario, Canada, March 7, 2020. Photo by Hyungwon Kang, Deseret News.

“I Put My Arms around Them”

When President Gordon B. Hinckley dedicated the Toronto Ontario Temple in 1990, he prayed for the area that “has become a gathering place for people from scores of other lands.”

“When we go to our ward, we see people of all nations who have gathered together,” said Sister Warner. “This really is Zion.”

President Ballard’s visit to this multicultural and cosmopolitan area—an international center of business, finance, and arts—came as health organizations and government officials across the globe warned against COVID-19.

There are now more that 118,000 confirmed cases of  COVID-19 worldwide, with more than 4,200 total deaths, according to data from Johns Hopkins University. The coronavirus has disrupted worship services and missionary and temple work in many countries, including Japan, Korea, and Italy.

Spread of the coronavirus is also a concern for members in Toronto, said Elder Carter. At the time of President Ballard’s visit, health officials in Toronto were monitoring 22 positive cases of COVID-19 in the city.

Because Church leaders asked Latter-day Saints to be mindful of current circumstances and be considerate of their health and that of others, President Ballard did not shake hands with members before or after the meetings.

But he did embrace many of them.

“I didn’t shake their hands,” he said. “I just put my arms around them and gave them a hug. That wasn’t on the ‘Do Not Do’ list.” 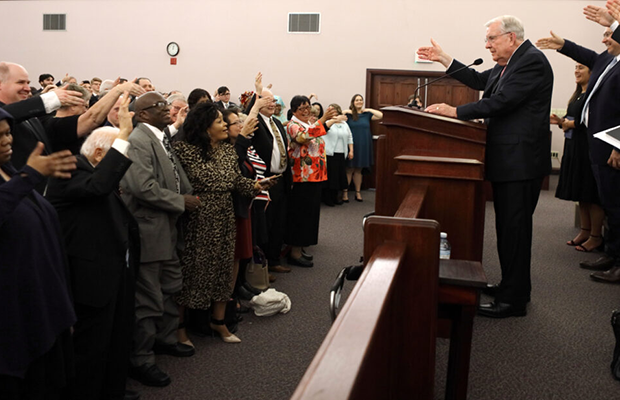 President M. Russell Ballard, Acting President of the Quorum of the Twelve Apostles of The Church of Jesus Christ of Latter-day Saints, exchanges air handshakes with the congregation after speaking at the Brampton Ontario Stake Center in Brampton, Ontario, Canada, on March 8, 2020. Photo by Hyungwon Kang, Deseret News.

“There Is a Kinship”

Beginning his 10th decade, President Ballard said he jumps at every chance he has to return to his “dear friends” in Toronto—something that is easier now that, as Acting President of the Quorum of the Twelve, he oversees the assignment committee for Apostle travels.

“When you develop friendships in the Church, it is more than just friendship,” he explained. “There is a kinship, a bonding that is not only physical but spiritual. You work with each other. Those dear Saints, many now passed away, were so helpful, so cooperative to our missionaries. . . . I owe them a lot. They were really good to me as their mission president.”

When the Ballards arrived in Toronto, their oldest son was serving a mission and their youngest son was almost five.

The family “cried all the way to Toronto. Our luggage never arrived,” said President Ballard. “But we cried even harder when we left.” 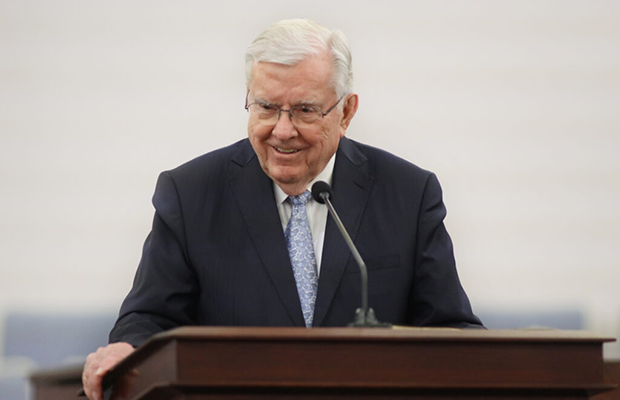 President M. Russell Ballard, Acting President of the Quorum of the Twelve Apostles of The Church of Jesus Christ of Latter-day Saints, speaks to missionaries at the Brampton Ontario Stake Center in Brampton, Ontario, Canada, on March 7, 2020. Photo by Hyungwon Kang, Deseret News.

“A Most Glorious Privilege”

In 1974, the year President Ballard arrived in Toronto with his family, President Spencer W. Kimball called on Latter-day Saints in the nations of the earth to raise up their sons and daughters to serve missions.

President Ballard remembers listening to the address; his responsibilities as a mission president were at the forefront of his mind. President Kimball said “several times during that sermon, ‘Is anything too hard for the Lord?’ Then he would say, ‘I don’t think so.’”

In the years since, President Ballard has witnessed the Church of Jesus Christ expand and grow. “This work has covered the world,” he told the missionaries. “There are not very many places where we have not had our feet.”

It is a work that started 200 years ago when Joseph Smith entered a grove of trees.

With the 200th anniversary of the First Vision approaching, President Ballard, Elder Clayton, and Elder Haynie repeatedly spoke of the Restoration. In leadership and member meetings, they shared their witness of Joseph Smith’s divine calling.

“I think we, along with all of God’s children, were waiting for the moment a 14-year-old boy walked into the grove of trees,” said Elder Haynie.

“You are the fulfillment of prophecy,” Elder Clayton told the missionaries.

And speaking of his time in Toronto and his service since, President Ballard called the opportunity to represent Jesus Christ and bring others to His restored Church “a most glorious privilege.”