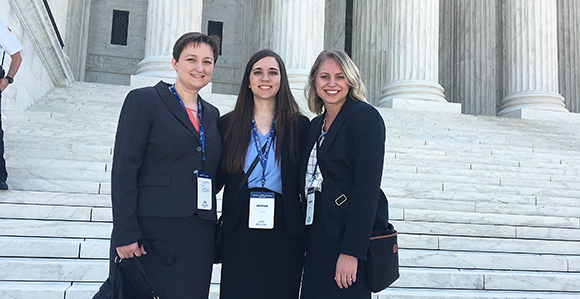 BYU law student Annemarie Garrett, left, participates in a law event in Washington D.C. Garrett is the mother of seven children—and her husband is a bishop. Photo courtesy of Annemarie Garrett.

“Her disciplined mind, her hunger for knowledge, and at the heart of it all, her goodness have been major factors of our family being healthy.” —Jared Garrett, spouse of law student

For most would-be attorneys, three years of law school is a sleep-deprived, retire-late-arise-early exercise in mastering the basics of legal research and writing, civil procedure, torts, property, and contract law, and the criminal code—all coupled with in-depth study of a specialized legal field.

“Law school and life balance” is generally an oxymoron. Just keeping all the proverbial plates spinning is an hour-to-hour task, even for students with few personal responsibilities outside of their studies.

She’s a high-performing third-year student at Brigham Young University's J. Reuben Clark Law School preparing for graduation and a job that waits at a large Utah law firm. And she’s also the mother of seven children—Thomas, Hintze, April, Lily, Nathaniel, Benjamin, and Wallace—and the wife of a bishop.

So how does Annemarie Garrett do it?

“It’s teamwork,” she told the Church News during a rare break from her law school and family duties. “My husband [Jared] and I made this plan together. And as a family, we’re all pitching in together to make it work.”

Jared Garrett calls his wife “a humble person” and “the most disciplined thinker” he’s ever known.

“Her disciplined mind, her hunger for knowledge, and at the heart of it all, her goodness have been major factors of our family being healthy,” he said.

A lifelong Latter-day Saint, Annemarie Garrett grew up in Anchorage, Alaska. In 2003, she claimed an undergraduate degree in theater arts (with a minor in Japanese) at BYU. For the next decade, she focused “mainly on being at home with my kids” and working part time doing Japanese-English translations.

She and Jared Garrett have been married for 21 years after meeting in a writing class at BYU. A convert and a returned missionary, he is an instructional designer and works for BYU. The Garrett children range in age from 8 to 19.

“My oldest is in the MTC about to head to Japan on a mission,” she said.

Becoming a lawyer had not been a lifelong ambition for Annemarie Garrett. Her interest was piqued as an adult as she watched a few friends become legal eagles. 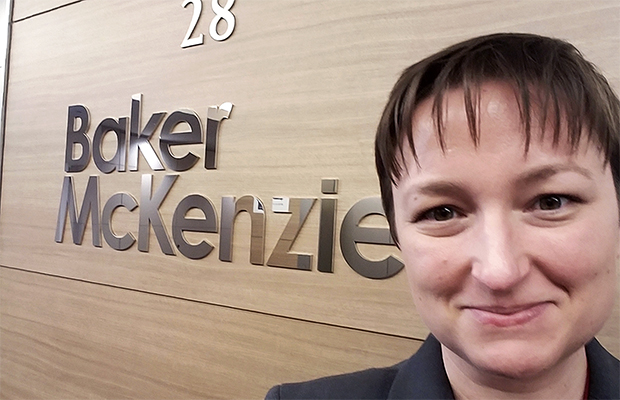 “But it wasn’t really until we started looking at options for me furthering my education that I really started looking closely at law school. It seemed like a good fit.”

She was also drawn to the affordability and scholarship programs offered by BYU’s law program, which has long been regarded as one of the best values in academia. As a Latter-day Saint, she also appreciates the mission of the Church-owned law school to “teach the laws of men in the light of the laws of God.”

So she crammed for the LSAT, applied, was accepted to BYU Law, and began her studies in the fall of 2017.

Transitioning from stay-at-home mom to full-time BYU law student marked a major life change for all nine of the Garretts. The family had recently moved to Utah County from Washington and were still adjusting to a new neighborhood, a new ward, and new schools.

“It was quite crazy,” Annemarie Garrett said. “But everyone was committed to making it work.”

Her husband initially worked from home and became “the home-based person while I was focused on law school for that first year.”

No surprise, flexibility has become synonymous with the Garrett household. Sometimes she drives the younger kids to school and picks them up after class. Other times, he plays chauffeur when his wife is in class or fulfilling other law school duties.

“I focus on my schoolwork when I’m in the law school building and then, when everything is quiet in the house and people have gone to bed, I’ll study at home for a little while,” she said. “You find time to study, week to week, when time opens up.”

There’s always a school activity or musical recital to plan around. And the two still make time for weekly dates.

The Garretts have had to define family priorities: What’s important and can’t be missed versus what can be set aside?

“And my husband completely took over the cooking, which has helped a lot. I never have to worry about meal planning or the shopping. He took over those jobs entirely.”

“I make sure that when I can study, that I’m in the zone,” she said. “Sometimes that takes a real effort to flip the switch, but I don’t really have a lot of leeway.”

“There have been times when I [planned] to be studying in the evening, but one of my teenagers is up and needs to talk about something, and so you rearrange things,” she said.

“What’s happening in their lives affects my life.”

Her testimony keeps her anchored to her priorities. Prayer provides direction and clarity.

“Just to feel that we are being guided and comforted by the Spirit has been very, very helpful,” she said.

Things have even got a bit busier for the Garretts. Jared Garrett was recently called to be the bishop of the Orem First Ward. “And we’re all very excited about that,” she said.

Despite her brutal schedule, Annemarie Garrett is an outstanding student and has earned a spot near the top of her law class. “I’ve always been a fairly strong writer, and much of law school assessment is based on writing, so that’s been helpful.”

Being a so-called non-traditional student, she added, has also been advantageous. She brings life experience to her studies. “Starting out, I didn’t know anything more about the law than anyone else, but I did have more experiences to filter the things that I was learning.”

Annemarie Garrett has already accepted an offer to work for Utah’s Kirton McConkie law firm following graduation in the spring. She’s not certain which practice area she will begin with, but she has a strong interest in intellectual property litigation. 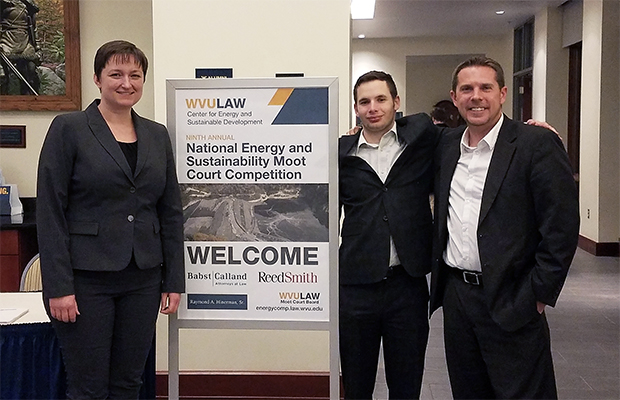