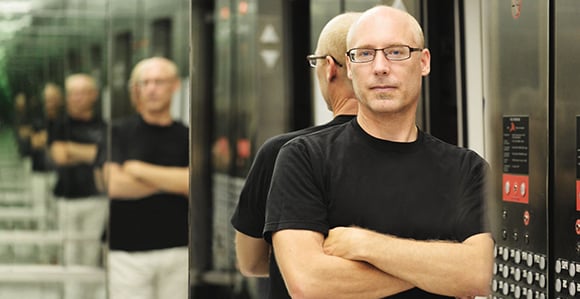 Lansing McLoskey, composer of the piece Zealot Canticles: An oratorio for tolerance. Conductor Donald Nally and The Crossing (a professional chamber choir) won a Grammy Award for the Best Choral Performance of McLoskey's piece in 2018.

“For me, there’s really no distinction, in a way, between secular and sacred music. … For me, composing and creating is a sacred endeavor.” —Lansing McLoskey, Grammy-Award winning composer

Lansing McLoskey had never written anything other than punk music. As a teenager, he had fallen in love with the electric guitar after purchasing one in a flea market for $15. Writing punk music had a very “do it yourself” kind of vibe, and it didn't take long for him to give up piano lessons for the more popular genre.

But as a recently returned missionary, McLoskey heard two songs—Luciano Berio’s Sinfonia and Igor Stravinsky’s Rite of Spring—that changed him forever, and suddenly he knew what he wanted to do with his life.

“I didn’t know this music existed,” he said. “It was what I was looking for my whole life, I just didn’t know it, and I decided immediately, ‘Well, that’s it. I have to be a composer.’”

It was just the start of McLoskey’s long and successful musical career, which includes a Ph.D. from Harvard University, music composition studies at the University of Southern California and the Royal Danish Academy of Music, and now a Grammy Award-winning piece for Best Choral Performance in 2018.

Although the iconic Grammy statue technically goes to conductor Donald Nally and The Crossing for the performance, McLoskey has been an integral part of the achievement.

McLoskey's original composition, Zealot Canticles: An oratorio for tolerance, took nearly seven years to complete and was the recipient of the prestigious Barlow 2015 commission. Based on the works of Nobel Prize-winning writer Wole Soyinka, the libretto of the 20-movement oratorio combines the author’s plays, novels, speeches, interviews, and essays. During the piece, McLoskey said he examined an era when “different races and religions were tolerant and co-existed,” contrary to much of the political atmosphere today.

“This is ... a statement piece,” said McLoskey, noting that once, he felt so troubled by the political atmosphere of intolerance in the world that he went through an “artistic crisis” where he couldn’t write. And yet while the message in his work might condemn violence and hatred, there are also reverent undertones to it. For instance, during the last four minutes of the piece, while a soloist criticizes extremists, the choir repeatedly sings the mantra “Om.”

“I knew you couldn’t end a piece like this in anger,” said McLoskey. “You had to have some sort of sense of introspection and hope, optimism. And in my opinion, there’s no word from any language, any culture, any religion (that) ... encapsulates that sense more than ‘Om.’”

The writing of the piece also required patience and prayer on McLoskey’s part. While he composed, the musician and professor at Miami University said he often fasted and prayed about his work, the majority of which he wrote in his ward’s meetinghouse.

“I composed probably 80 percent of it in the chapel,” he said. “Our church has a grand piano, and I got the key from the bishop, and I just went and composed in the chapel … at the grand piano to really get peace and not be interrupted.”

Although it’s not the type of piece that will likely be performed by The Tabernacle Choir at Temple Square and is a different kind of oratorio than Handel’s Messiah, Zealot Canticles is still a sacred piece, McLoskey said—largely because the act of composing in and of itself is sacred.

“For me, there’s really no distinction, in a way, between secular and sacred music,” he said. “For me, composing and creating is a sacred endeavor.”

Glen Nelson, co-director of the Center for Latter-day Saint Arts (formerly known as the Mormon Arts Center), noted that while the piece is based on the past, it invites listeners to see how it applies today and encourages them to overcome their differences. And while the sound of the piece might be unfamiliar to many Latter-day Saints, Nelson said that’s the very reason they should listen to it.

“When you have a Nobel Prize winner and you have a Grammy winner and they have something really powerful to say about belief, you kind of owe it to yourself to listen,” he said. “Suddenly, you say, ‘Well, hold on, the whole world is giving this guy this giant stamp of approval, it’s not acceptable that we don’t know him, and if we don’t know him, who else don’t we know?” he stated.

McLoskey isn’t the first Latter-day Saint to have made his mark in the Grammy world. In 1959, The Tabernacle Choir won a Grammy for Best Pop Performance by a Vocal Group or Chorus. Gladys Knight has won seven Grammy Awards over the course of her musical career, and Harvey Fletcher won a posthumous award in 2016 for his achievements in stereophonic sound. And that’s just the beginning. According to Nelson, though, this is the first time that classical music composers have made such an impact at the Grammys.

For conductor Donald Nally, the Grammy Award of Best Choral Performance belongs not just to him, but to the many individuals who helped bring the work together.

“It is truly humbling to have so many artists and friends invest everything into a project that means so much and has a strong message, and then see that it is being heard by many people beyond our local and amazing family,” he said. “This award belongs to our singers, instrumentalists, and the composer.”

While this achievement is “the thrill and honor of a lifetime” for McLoskey, it was seeing the reactions of the audience and the musicians that made the biggest impact on him.

“Audience members were in tears. But the musicians themselves said that they had to stop because they were so moved that they were crying and couldn’t even continue playing,” he said. “I think it’s really my crowning achievement in my career as a composer.” 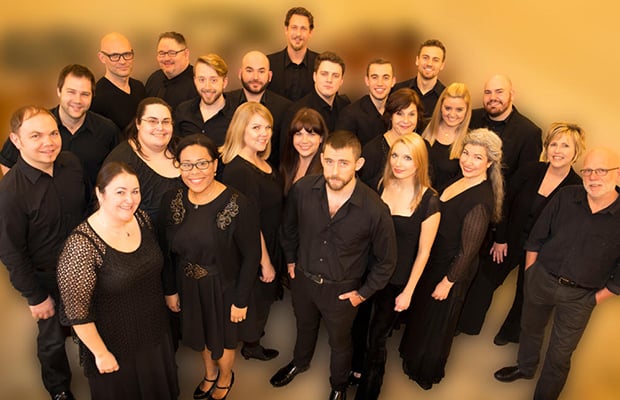 The Crossing, a professional chamber choir, received a Grammy Award for the Best Choral Performance in 2018 for the piece, Zealot Canticles: An oratorio for tolerance. Photo courtesy of Lansing McLoskey. 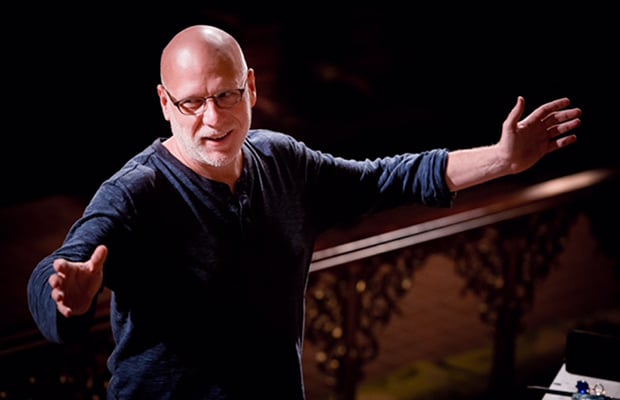 Conductor Donald Nally of Northwestern Bienen School of Music was a recipient of a Grammy Award for the Best Choral Performance in 2018. Photo courtesy of Lansing McLoskey.