How This 88-Year-Old Violinist Became a Musical Missionary 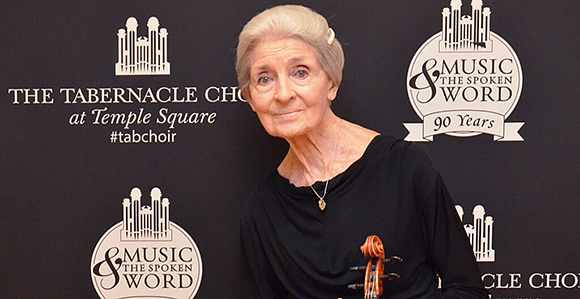 Orchestra at Temple Square musician Marilyn Anderson, 88, began playing the violin when she was 7. Her life has been devoted to family, music, and missionary work. Photo by Debra Gehris.

“Our greatest desire is to express our testimonies of Christ through music.” —Marilyn Anderson, violinist

If you’re a fan of the weekly Music & the Spoken Word television broadcast, you’ve undoubtedly spotted Marilyn Anderson playing her one-of-a-kind violin with the Orchestra at Temple Square.

With her regal silver hair and vigorous performing style, she’s impossible to miss.

And at age 88, she brings more than eight decades of musicianship to the Orchestra stage. But the lifelong Latter-day Saint is quick to clarify that she is not a musician who performs missionary work—she is a missionary who performs music.

“The musicians in the orchestra are of professional quality but play without remuneration—and this seems to add to the special spirit of the orchestra,” she said. “Each one is set apart as a musical missionary. . . . Our greatest desire is to express our testimonies of Christ through music.”

Barry Anderson, an administrator of the Orchestra and the Tabernacle Choir at Temple Square, said Marilyn Anderson (who is not related) and her fellow missionary artists perform a weekly service that blesses millions.

“We have a real sense in the orchestra of the importance of the work that we do,” he said.

It’s a special year for both Andersons and the entire Orchestra at Temple Square. The organization marked its 20th anniversary last month. Church leaders formed the orchestra in 1999 to serve as a companion ensemble for the Tabernacle Choir.

Two decades later, it is hard to imagine the Choir without the Orchestra. The group has performed on every Choir recording since 2003 and, in 2005, began traveling with the Tabernacle Choir on tours.

And Marilyn Anderson has been there from the beginning. 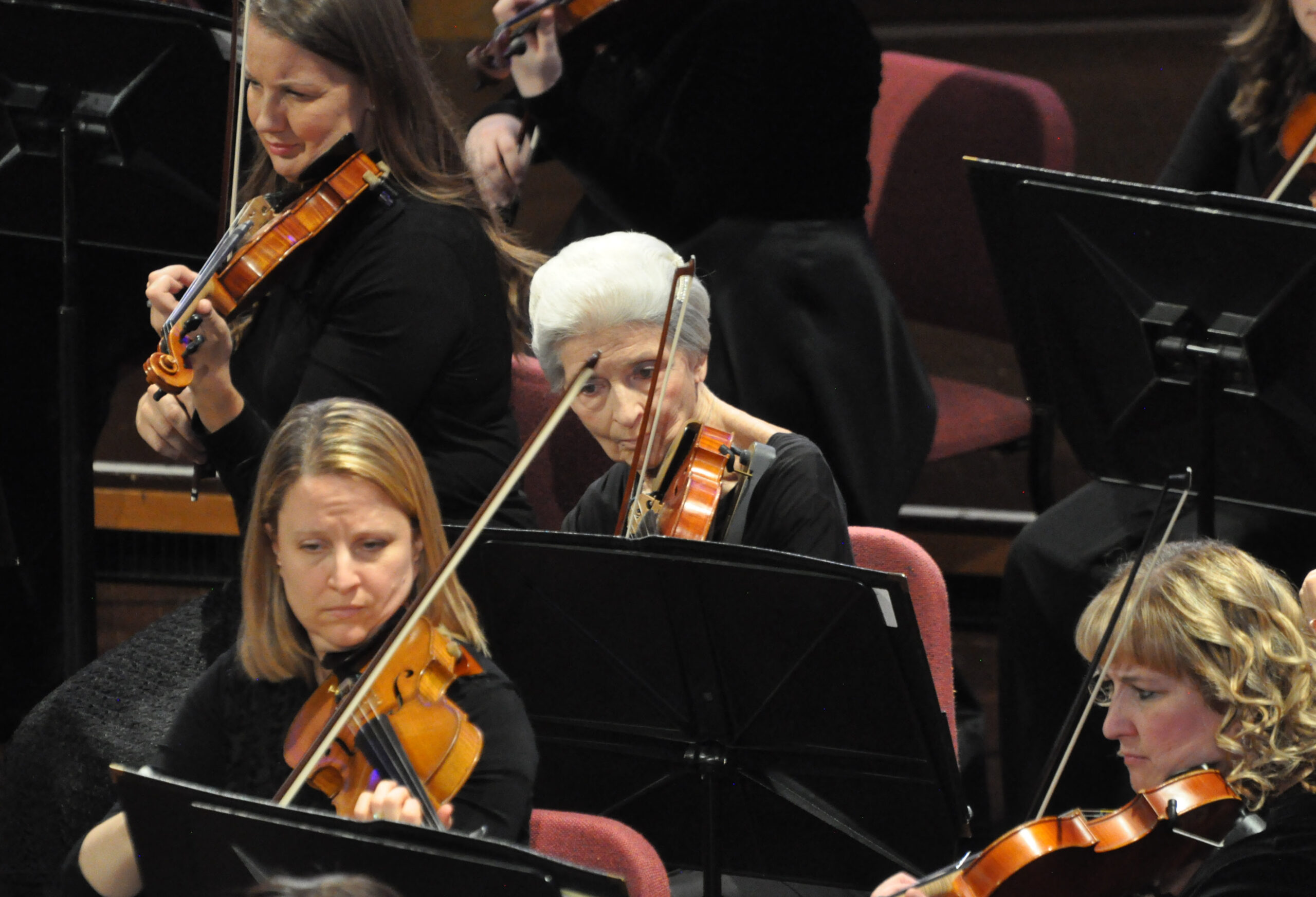 Violinist Marilyn Anderson, center, has performed in the Orchestra at Temple Square since its beginning 20 years ago. Photo by Ron Crapo.

“I was very grateful to be accepted into the Orchestra at Temple Square and love playing with the Choir,” she said. “It seems to be a perfect way to conclude a wonderful adventure with music.”

“My father said that I could [take violin lessons] if I would agree to sign a little contract to faithfully practice every day. I signed the contract . . . and kept my word.”

And young Marilyn was a quick study. A year after picking up the instrument, she was playing with a large orchestra of violinists at the San Francisco World’s Fair. At 17 she began a 23-year tenure with the Utah Symphony under the baton of famed conductor Maurice Abravanel.

“This was, in my opinion, the golden age of the Utah Symphony,” she said. “We recorded and toured extensively. Our travels took us to Greece twice, other parts of Europe several times, a five-week tour to Central and South America, and a concert at Carnegie Hall in New York City.”

She would later perform with the Denver Symphony and the Cali (Colombia) Orchestra.

Anderson’s professional music career was often interrupted by full-time missionary assignments. But she calls it a happy sacrifice.

Marilyn met a law student and returned missionary named Mark Anderson at an institute dance at the University of Utah.

Marilyn and Mark dated for a couple of years before marrying in the Salt Lake Temple in 1954. A few years later they welcomed a baby boy named after his father, Mark.

In 1961, the elder Mark was called to preside over the Finnish Mission, so the Andersons moved to Helsinki. The couple served subsequent full-time missions to Spain and the Canary Islands, Colombia, Ukraine, Texas, and California.

And at each assignment, Marilyn utilized her musical talents to share and celebrate her gospel testimony.

She’s grateful for good health (she still jogs outside her Centerville, Utah, home) that has allowed her to simultaneously serve as a mother and a missionary and a musician.

A grandmother of seven and great-grandmother of nine, Anderson still gets a thrill each Sunday when she pulls her violin to her chin, raises her bow, and makes uplifting music with her fellow orchestra members.

Mark died last year, following 63 years of marriage. But Marilyn feels her husband’s presence every time she plays. “The violin that I play on now was made by my husband,” she said.

Mark presented it to Marilyn decades ago after taking a course in violin making. Initially, she wasn’t certain if Mark’s violin would be a good fit. But a memorable solo with the instrument during a Church meeting changed her mind.

“To my surprise,” she said, “I enjoyed playing on it more than the Ansaldor Poggi violin I had been playing on for many years.” 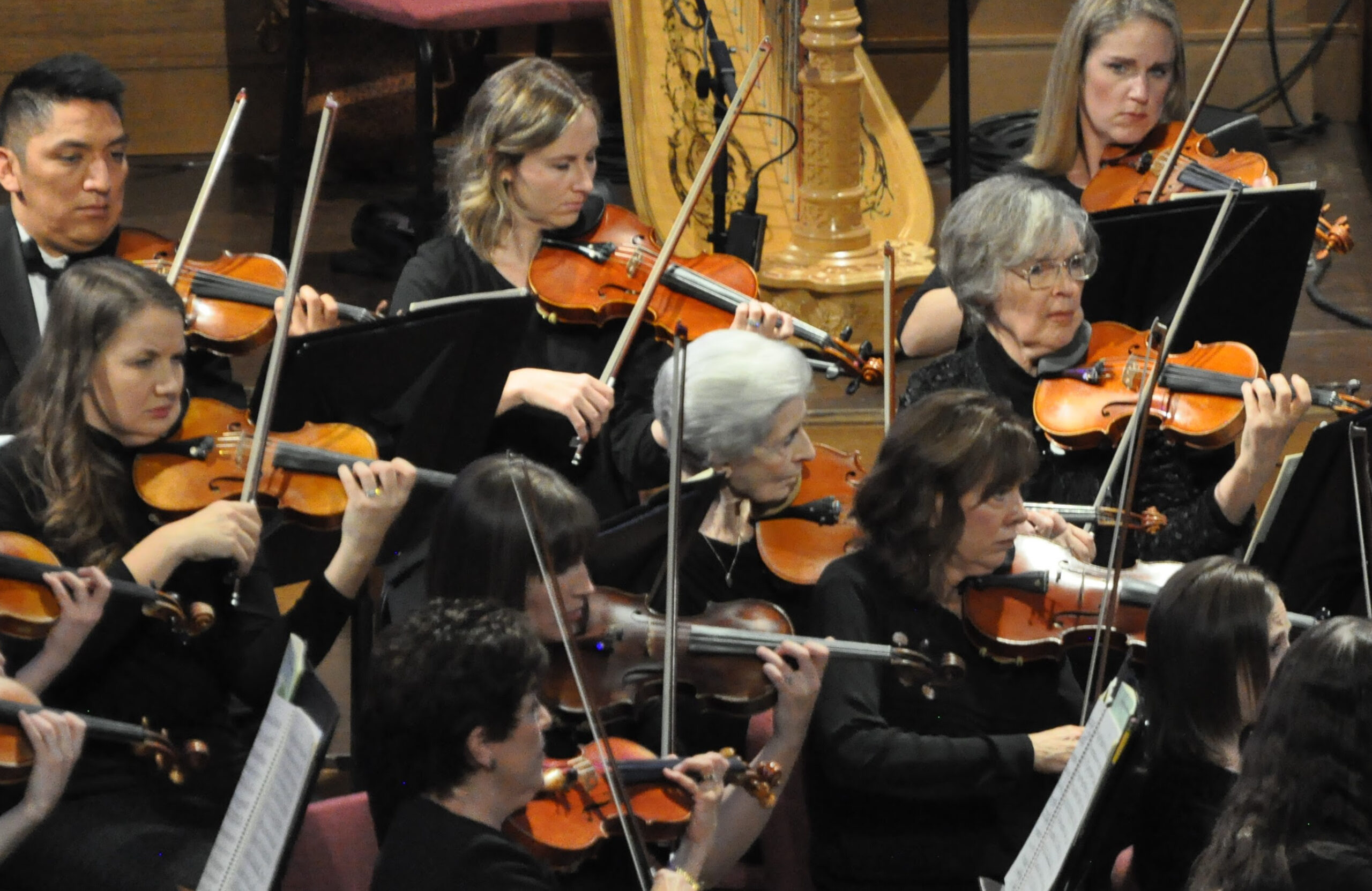 Marilyn Anderson, center, has been a key member of the violin section of the Orchestra at Temple Square since its beginnings 20 years ago. She enjoys utilizing music to share her gospel testimony. Photo by Ron Crapo.