“When we share our light, other people have the opportunity to find it.” —Nicole Luz, Latter-day Saint and social media influencer

Behind the curtain of the Anhembi Convention Center in São Paulo, Brazil—where some 37,000 Brazilian Latter-day Saints were gathering for a member devotional—Nicole Luz, 17, and Wesley Mercês, 22, waited.

As always, they excitedly shared their beliefs and talked openly about being members of The Church of Jesus Christ of Latter-day Saints and as social media influencers in Brazil.

Each spoke of how their testimony of Jesus Christ has helped them in their very public journey.

Luz wore her Young Women medallion on the reality television show The Voice Kids in Brazil, and Mercês walked away from more than a million Facebook fans to serve a mission.

Sitting in the makeshift green room in Brazil, they seem just like every other young adult in the Church. But they are not. Mercês has 1.7 million Facebook followers. Luz’s face is recognized across this South American nation.

They were two of a few young adults to meet with President Russell M. Nelson and his wife, Sister Wendy Nelson, before a massive member meeting in Brazil last month.

Each spoke about a common goal: to reflect the Savior’s light in their lives.

“One thing I like about her work is that she always makes it clear she is a member of the Church,” Mercês said of Luz. “She wears her medallion. She dresses modest.”

“God is using us as instruments in His hands to help other people,” Luz explained.

Mercês learned that from experience. Mercês is the author of the popular Facebook page “As Crônicas de Wesley.” Four years ago, he walked away from the page to serve a full-time mission. “When I said I was going to serve a mission, I received 28,000 messages in one day,” he said. “I was scared to open them. Many said, ‘Do not go.’ But most of them were encouraging. Some people said they could not be that brave.”

Mercês said the Lord blessed him when he returned from his mission.

Popularity found on the internet is fickle, he said. “People forget very fast, but God is blessing my work to this day,” he said.

“I left, and I thought that would be the end,” said Mercês. Instead his Facebook following grew by 500,000 fans during his two-year absence.

Luz said people are drawn to Mercês’s work because it sends the simple message that you can be righteous and have joy. It is clean and never puts others down.

“The secret,” said Mercês, “is that living the standards is cool.” Youth today can be themselves without “setting aside their principles,” he said.

Luz agrees. “I sing popular music, but people see there is something different about me. I know it is not me, but the Spirit.”

Mercês prayed before meeting with President Nelson that he would know the prophet’s message for him and that he would increase in faith and testimony.

They shook President and Sister Nelson’s hands and answered their questions.

Then Mercês and Luz both posted photographs on their social media pages with President Nelson. They shared their testimonies that President Nelson is a prophet and has been called by God.

What was it like to be with the prophet and then listen to his words? 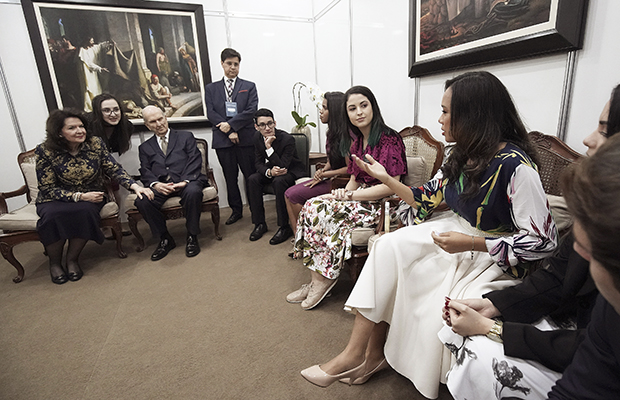 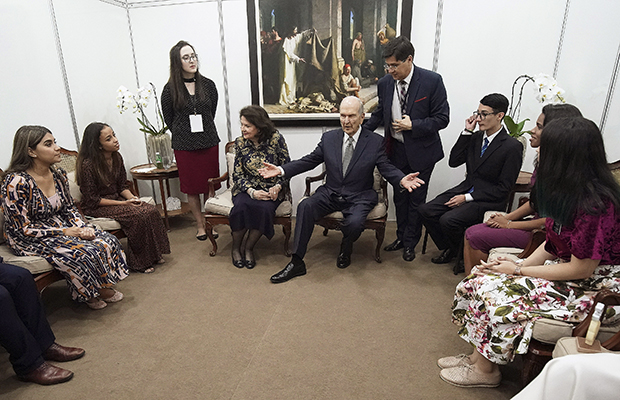