How Rare a Proclamation: A Look at Today’s and the 5 Previous Proclamations in Church History 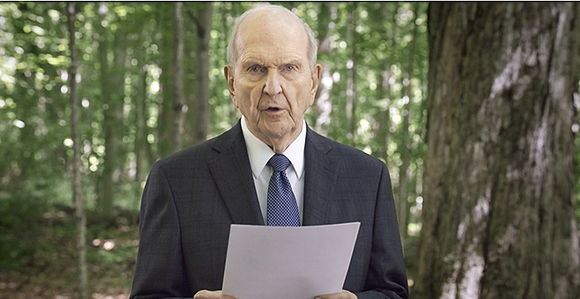 A screenshot from the video of President Russell M. Nelson reading “The Restoration of the Fulness of the Gospel of Jesus Christ: A Bicentennial Proclamation to the World,” prerecorded in the Sacred Grove outside of Palmyra, New York, and broadcast as part of the global broadcast of the Sunday morning session of April 2020 general conference.

“We felt impressed to create a monument not of granite or stone but of words . . . to be etched in the ‘fleshy tables’ of our hearts.” —President Russell M. Nelson

The Sacred Grove. A prophet of God. And a message that was delivered—and received—instantaneously worldwide.

In a fitting tribute of the 200th year since the Prophet Joseph Smith was visited by God the Father and His Son Jesus Christ in the First Vision, President Russell M. Nelson chose the same Sacred Grove setting to issue a rare Church proclamation Sunday, April 5—“The Restoration of the Fulness of the Gospel of Jesus Christ: A Bicentennial Proclamation to the World.”

President Nelson’s reading of the proclamation—authored by the First Presidency and Quorum of the Twelve Apostles of The Church of Jesus Christ of Latter-day Saints—was prerecorded in the Sacred Grove outside of Palmyra, New York, and broadcast as part of the global broadcast of the Sunday morning session of April 2020 general conference, originating from Salt Lake City, Utah.

It hearkened to a time four decades earlier, when a Church President and Apostle issued an earlier proclamation honoring the 150th anniversary of the organization of the Church of Jesus Christ from another site of the Restoration.

The proclamation read by President Nelson in the Sacred Grove begins: “We solemnly proclaim that God loves His children in every nation of the world. God the Father has given us the divine birth, the incomparable life, and the infinite atoning sacrifice of His Beloved Son, Jesus Christ. By the power of the Father, Jesus rose again and gained the victory over death. He is our Savior, our Exemplar, and our Redeemer.”

It goes on to recite events of Joseph Smith’s First Vision, the appearance of the Father and the Son, and the subsequent coming of heavenly messengers to restore ordinances and priesthood authority. It underscores the translation of the Book of Mormon: Another Testament of Jesus Christ, as well as its teachings and testimonies. And the proclamation declares that The Church of Jesus Christ of Latter-day Saints “is Christ’s New Testament Church restored.”

“We gladly declare that the promised Restoration goes forward through continuing revelation. The earth will never again be the same, as God will ‘gather together in one all things in Christ’ (Ephesians 1:10).”

The proclamation concludes: “With reverence and gratitude, we as His Apostles invite all to know—as we do—that the heavens are open. We affirm that God is making known His will for His beloved sons and daughters. We testify that those who prayerfully study the message of the Restoration and act in faith will be blessed to gain their own witness of its divinity and of its purpose to prepare the world for the promised Second Coming of our Lord and Savior, Jesus Christ.”

Prior to sharing the proclamation, President Nelson explained Church leaders had pondered an appropriate commemoration for the bicentennial anniversary of “this singular event.”

“We wondered if a monument should be erected. But as we considered the unique historic and international impact of that First Vision, we felt impressed to create a monument not of granite or stone but of words—words of solemn and sacred proclamation—written, not to be carved in ‘tables of stone’ but rather to be etched in the ‘fleshy tables’ of our hearts,” he said, referring to 2 Corinthians 3:3.

The proclamation has already been translated into 12 languages, with others to follow, and is immediately available on the Church’s website as well as on the Church News website.

“Study it privately and with your family members and friends,” invited President Nelson after the proclamation had been shared. “Ponder the truths and think of the impact those truths will have on your life if you will hear them, hearken to them, and heed the commandments and covenants that accompany them.”

He concluded with his testimony of Joseph Smith—his role as prophet and martyr and in the Restoration. “How I love and honor him!” President Nelson said.

“God lives! Jesus is the Christ! His Church has been restored! He and His Father, our Heavenly Father, are watching over us. I so testify in the sacred name of Jesus Christ, amen.”

President Nelson then led listeners in the Hosanna Shout, first explaining its history and its purpose. The session concluded with the prerecorded choir and congregation singing the hymn of the Restoration, “The Spirit of God.”

How rare are Church proclamations? Only five have been issued previously by the leaders of The Church of Jesus Christ of Latter-day Saints, with Sunday’s being the sixth. The first three were issued in the first 35 years after the Church’s organization, the last three in the past 40 years.

“All such declarations have been solemn and sacred in nature and were issued with the intent to bring forth, build up, and regulate the affairs of the Church as the kingdom of God on the earth,” wrote Robert J. Matthews in an entry on proclamations in the 1992-published Encyclopedia of Mormonism.

The previous five proclamations are as follows:

A proclamation is different from an official declaration, a doctrinal exposition, or statements on policies. Some of these come from only the First Presidency, some just from the Quorum of the Twelve, and some from both the presidency and the quorum.

Examples of declarations can be found in the Church’s Doctrine and Covenants. Official Declaration 1 is the 1890 Manifesto, stating officially the Church’s advice against any future plural marriages by the Latter-day Saints in response to increasing antipolygamy pressure from the United States government. And Official Declaration 2 is the 1978 revelation on priesthood announced by Church leaders in June 1978—which extended the priesthood and temple blessings to all worthy male members of the Church—and ratified in the October 1978 general conference.

Examples of other such communications include the 1847 general epistle from Brigham Young and the Council of the Twelve Apostles to the early Saints during the several years of the “apostolic era” following the martyrdom of Joseph and Hyrum Smith, the 1909 First Presidency statement on the origin of man, a doctrinal exposition on the Father and the Son issued in the August 1916 Improvement Era magazine, the 1938 First Presidency message on world peace issued a month after the onset of World War II, and the January 1, 2000, pronouncement of “The Living Christ: The Testimony of the Apostles” at the transition of the 20th and 21st centuries.