How Family History Can Combat Feelings of Anxiety and Depression

Amelie Bleakley, 41, of Keynsham, England, has found an increased sense of purpose and worth through family history.

“Family history and temple work is not only for the dead but blesses the living as well.” —Elder Dale G. Renlund, Quorum of the Twelve Apostles.

Editor’s note: This is part one in a series on the healing blessings of family history based on Elder Dale G. Renlund’s April 2018 general conference talk “Family History and Temple Work: Sealing and Healing.” While many with feelings of anxiety and depression have found strength in doing family history, this is not a replacement for professional help in addressing mental health. For more resources, please visit mentalhealth.ChurchofJesusChrist.org or talk to a health care provider.

After surviving her first year of teaching in northern Texas as a recent college graduate, Christie Blair decided to take a trip. The first months of teaching are always tough, but dealing with anxiety made them even tougher, she said.

But this wasn’t a relaxing vacation to Hawaii, the Bahamas, or Mexico. This trip would energize her in a different way.

Blair packed up her family history files, tossed a tent in the car, and took off in her little Ford Escort to drive from Texas to the Midwest to see the places where her ancestors had lived.

“Taking pictures of grave sites, finding handwritten documents in small libraries, and just seeing for myself these places I had seen on microfilm . . . all of this energized my soul, day after day,” recalled Blair, a Latter-day Saint who is now 44 and lives with her husband and children in McAllen, Texas.

She gives credit to strengthening moments on that trip, as well as a family history trip she took two summers later, with helping her manage anxiety and “broaden my world rather than letting it contract and suffocate me.” 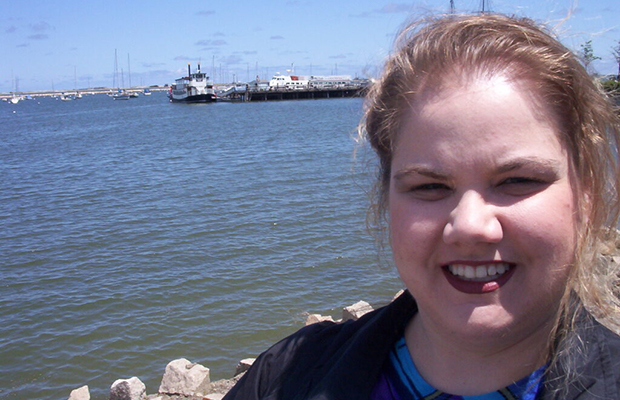 Christie Blair poses for a photo at the Plimoth Plantation during a family history trip in June 2003. Photo courtesy of Christie Blair.

Researchers at Emory University learned that adolescents who participate in family history have “higher levels of emotional well-being,” as family stories help to provide a sense of identity, of who they are in the world.

Church leaders have promised similar blessings to Latter-day Saints as they seek out their ancestors, compile family histories, and perform ordinances in temples.

“Family history and temple work is not only for the dead but blesses the living as well,” said Elder Dale G. Renlund of the Quorum of the Twelve Apostles during the April 2018 general conference. By participating in family history, “we also lay claim to ‘healing’ blessings promised by prophets and apostles” (“Family History and Temple Work: Sealing and Healing”).

Among those blessings are increased understanding of the Savior and His Atonement; increased joy and ability to feel the love of the Lord; increased love for ancestors and living relatives “so we no longer feel alone”; and “increased assistance to mend troubled, broken, or anxious hearts and make the wounded whole,” Elder Renlund said.

Many Latter-day Saints who face mental health challenges have found these blessings and more as they discover, gather, and connect their families. 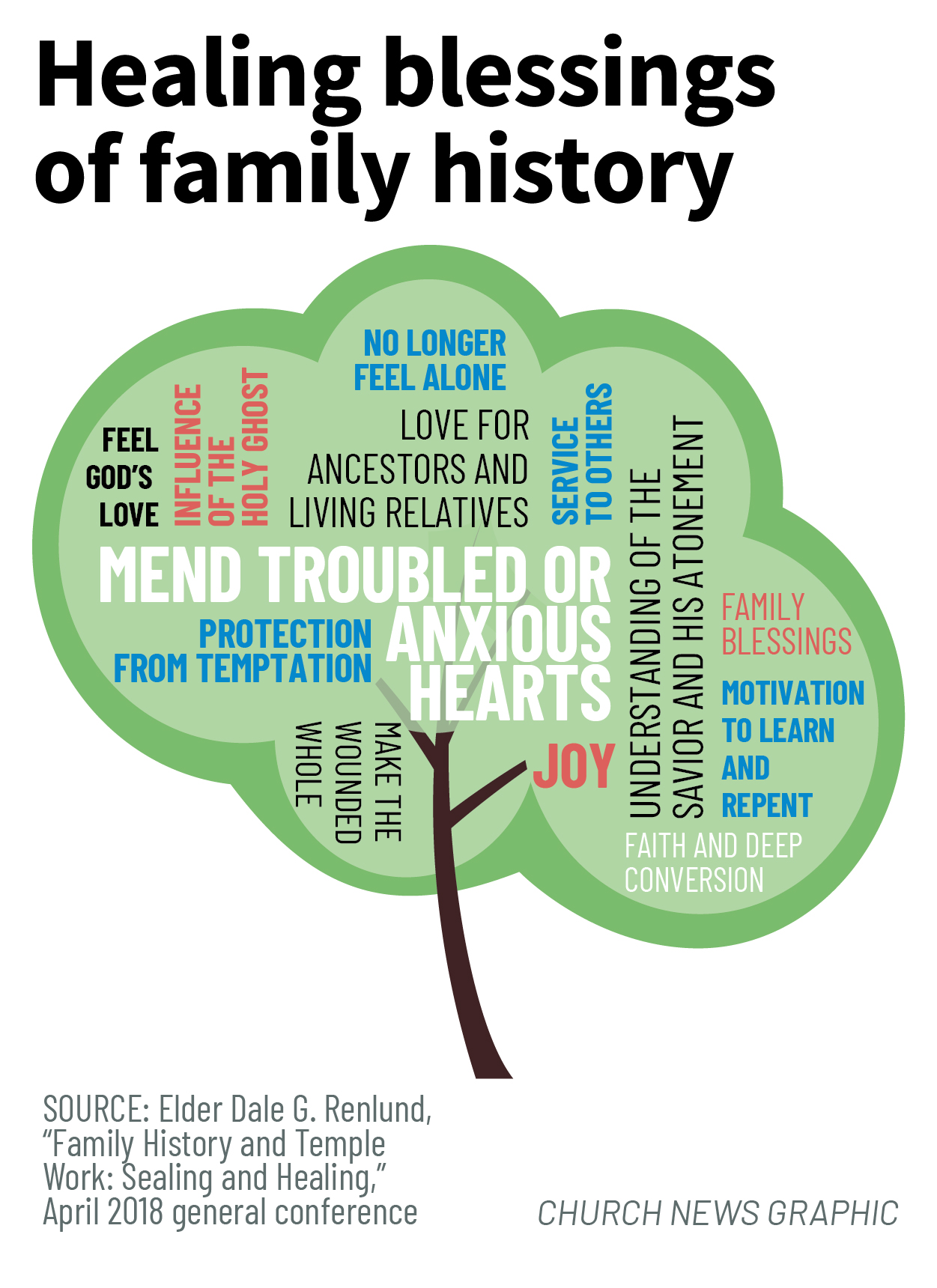 Putting Ourselves in the Context of Something Bigger

Matt Millican is a licensed professional counselor and member of the Church who lives in Ontario, Oregon. He said participating in family history can be a helpful tool to those struggling with depression and anxiety as it can provide a way for people to feel productive and focus on something outside of their depression and anxiety.

By doing family history, “we can get out of our heads and can look at ourselves in the context of something much bigger,” he said.

Millican said there is also a “get out and go do” aspect to family history that can be beneficial to those facing mental health challenges. “There’s so much more beyond just researching online,” he said. For example, people can visit places where important family events took place or take photos of headstones of family members’ graves—just as Blair did that summer.

“Activities such as these provide the opportunity to try something different or go someplace new that can have meaning in our lives, and yet there’s not really any pressure to specifically accomplish anything, other than going to experience,” he said.

Blair said memories of those summer trips got her through hard days of “dishes, diapers, and not being able to leave the house” when she was a young mother with three children aged 3 and younger. She also remembers nursing at her computer while she indexed and worked on family history because it made such a big difference for her.

Family history has continued to be something Blair turns to on difficult days. “I still struggle with anxiety, and it limits me in my interactions with other people sometimes,” she said. “But I know this is a way I can serve other people even when I feel like I can’t say ‘hi.’” 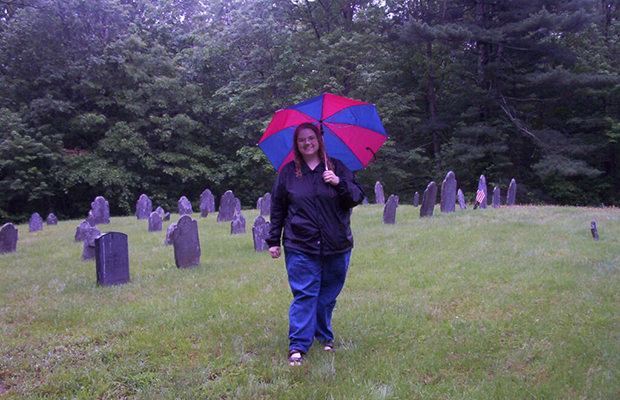 A Sense of Purpose and Worth

Amelie Bleakley, 41, a member of the Church living in Keynsham, England, has suffered from depression and anxiety for many years. During one period of depression, she remembered counsel in her patriarchal blessing to search for her ancestors. Family members had told her they were stuck and there was no more work to be done. But trusting in the Lord and in her blessing, she decided to give it a try.

Battling feelings of worthlessness, “I thought if I could find even one clue, one record, it would help me feel useful, because I would have found one person to do the work for at the temple,” she said.

Bleakley found purpose as she tested the limits of her abilities and dove deeper into the research. Her family was thrilled when she broke through barriers that had been there for years.

“It was such a fantastic feeling to have a glimpse at the lives of people from the past, humbling, exciting. . . . I laughed; I cried,” she recalled. “I was feeling alive, which wasn’t always the case when I was really low. . . . It helped me overcome that feeling I was useless and worthless.” 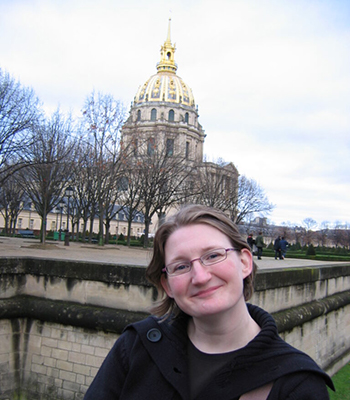 Amelie Bleakley, 41, of Keynsham, England, is pictured in front of the Invalides in Paris, France, where one of her ancestors spent part of his life as a Napoleonic wars veteran. Photo courtesy of Amelie Bleakley.

Lisa Coffey, a mother of four children and convert to the Church who lives in Meridian, Idaho, has also felt the healing blessings of family history work as she suffers from chronic anxiety.

One evening during a particularly rough time—what she described as “one of the lowest points I can ever remember in my life”—she was crying at her laptop after hours of research. Suddenly, she stumbled upon her father’s original birth record from 1922 in Mexico. This led her to many ancestors she had never heard of.

“I learned that we are definitely watched over by those who have passed on,” Coffey said of the experience. “I felt their influence and felt that they were guarding me and my family, which lightened the burdens I was carrying. It was an amazing time of revelation for me in the middle of a dark time.”

One of the problems with anxiety, she said, is an inability to focus and make simple decisions because the mind is moving so fast. Negative thoughts are persistent. But family history straightens out her thoughts and keeps her focused.

“The accuracy and detailed process of using FamilySearch (adding names, documents, merging) was a gift that began to grow in other areas of my life the more I participated,” she said. “Going to the temple became joyful and turned around the persistent negative thinking over time.” 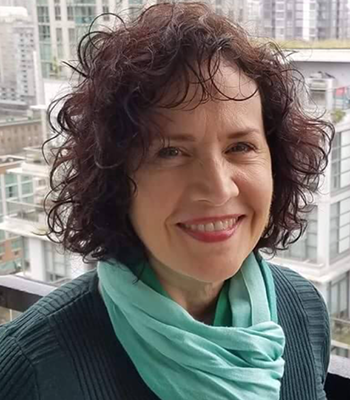 Lisa Coffey, a mother of four children who lives in Meridian, Idaho, has experienced many healing blessings of family history. Photo courtesy of Lisa Coffey.

Drawing on Strength from the Past

There was a time in the life of Jeff Westover when a career crisis came up, his mother had a stroke, he learned one of his teenage children was in trouble, and a daughter was coming home from serving a full-time mission—all within a matter of a week.

“Everything kind of came to a head at one time, and it began a more difficult period in my life where I think the depression was kick-started by the circumstances,” said Westover, a father of seven and grandfather of soon to be seven who lives in Smithfield, Utah.

Not long after, Westover and his family moved to Cache Valley in Utah, and he and his wife were asked to participate in a pioneer trek—an activity in which youth reenact faith-building experiences of pioneers who journeyed to the Salt Lake Valley in the mid-1800s. Part of Westover’s assignment included bringing stories of ancestors who crossed the plains.

“The whole experience of going on trek and really being pushed into the position of actually doing some family history . . . it very much opened the doors for me,” Westover said.

It was family history, he said, that got him through that critical time in his life.

Researching his family history has also helped him understand the anxiety he sees in his children. “My children suffer from anxiety in ways I never did when I was younger. I struggled for a long time to understand it,” he said. “But as we’ve researched my wife’s family, I see it. I see patterns of it within the family that are genetic.”

The best way for his children to cope with their anxiety, he said, “is to do the family history and understand that they’re not the first ones to go through it.” 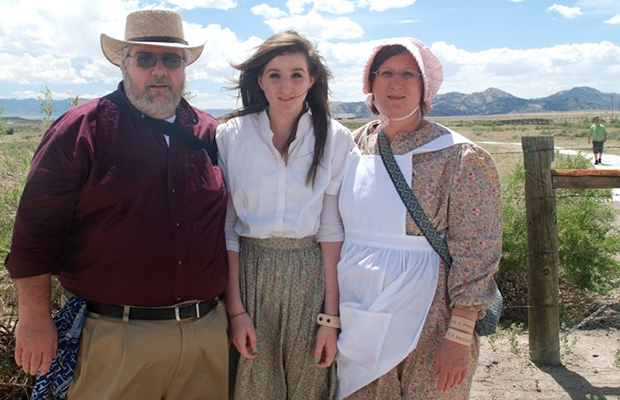 From left: Jeff Westover, his daughter Maggie, and his wife, Sandy, smile at Independence Rock in Wyoming, Utah, the first day of trek in June 2013. Photo courtesy of Jeff Westover.

Amy Harris, an associate professor at Brigham Young University and the program director for the family history major, said many students have commented on how family history has helped them make sense of mental health challenges in themselves or their family.

“It’s not a magic pill you take and suddenly you don’t have any problems,” Harris said of doing family history research. “But it just sort of helps give them context and helps them feel not alone.”

In a world where anxiety and depression is often “exacerbated by perfectionism,” learning about the obstacles and trials family members faced “might give you a little bit of grace for yourself . . . to not have to do it all and be it all,” she said.

Christina Herzog-Garcia, 50, from Meridian, Idaho, has found similar comfort as she and her husband were never able to have children and adoption didn’t work out. “There were many years of sadness and anger,” she said.

But then she dove into family history and discovered someone she could connect with.

“Just by knowing that my great-grandfather’s sister was married and was never able to have children, just like me, gave me a comfort knowing that someone in my family went through the exact same thing I am going through now,” Herzog-Garcia said.

For more ideas, go to familysearch.org/blog/en/genealogy-made-easy/.