How DNA Is “Changing Everything” about Genealogy 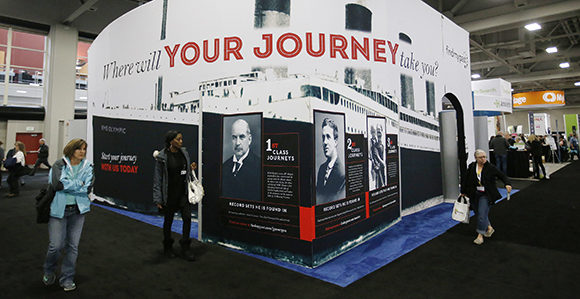 By using DNA tests, people can have a clearer picture of who their family is and where they came from.

When it comes to family history research and genealogy, DNA is the new buzzword, and according to Steve Rockwood, the CEO of FamilySearch who gave the keynote address that kicked off RootsTech 2018, “It’s changing everything.”

Although DNA testing for genealogy research first became available around 13 years ago, Julie Johnson, a genealogy specialist from the Brigham City, Utah, area, said that it is just in the past few years that people have really become open to the idea of using DNA tests.

“I think people are more aware of what it is now, and there is a lot more interest because it’s becoming more common and less expensive,” Johnson said.

And if the way the crowds at the conference last week rushed to form lines to buy DNA testing kits from the various vendors offering special sale prices is any indication, DNA really is changing the way family history research is done.

“Everybody’s clamoring to do it now that it’s cool,” said Nicka Smith from Ancestry during a presentation on Friday, March 2.

“As people, genealogy offers a way for us to reach folks that are across the aisle,” Smith said. “It makes us so much more tangible and connectable.”

For Smith, DNA testing has allowed her to make tangible connections that have expanded her family tree further than she ever could have done with documents and family history stories alone. With family history ties that lead back through slavery in the South, documents are often unavailable and, as Smith explained, many of her family lines have come to dead ends in her research. But in the past few years, the use of DNA has been helping to break through those barriers.

“I think what DNA is doing, especially for people of color, especially for African Americans, is it is allowing us the ability to verify what we’ve heard orally,” Smith said, pulling from stories in her own family history. “It’s verifying a lot of that stuff that people never thought we’d be able to verify. DNA is stepping in and it’s unheard of.”

Smith explained that through her family history research, it has become clear to her that “we are the sum of other people’s choices.” The choices of one's ancestors and the choices of those who affected their lives have also affected lives down through the generations. To understand and connect to them, the descendants must find and uncover their stories, and doing so may, in turn, help them better understand who they are and where they come from.

DNA connects us with the human family

During his keynote address when he introduced the conference theme: “Connect, Belong,” Rockwood said, “Family transcends all borders.” He explained his belief that “when we connect and belong to one another, we treat each other differently.”

That sentiment is one that UK-based company Living DNA says they’re trying to emphasize as they develop new ways to put DNA to use. 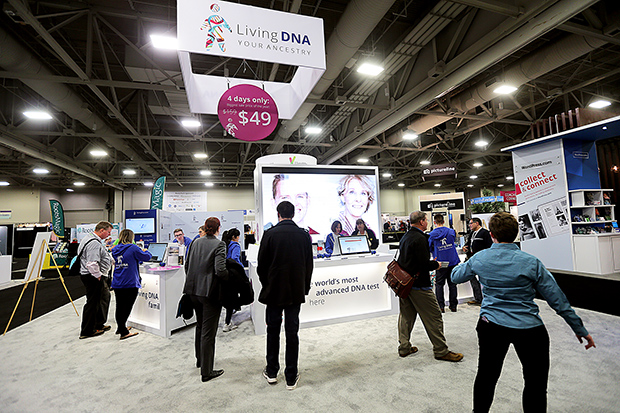 Vendors and attendees move around a DNA exhibit as RootsTech opens at the Salt Palace in Salt Lake City on Wednesday, February 28, 2018.
Photo by Scott G Winterton, Deseret News.

In staying true to their mission of One World, One Family, Nicholson and his cofounder Hannah Morden have created various outreach projects, including one where they provide DNA tests for education outreach. Their purpose has been to help educate people from a young age about how humans are all connected through DNA and that similarities can be found between everyone if one is willing to look for them.

Speaking of the results from their in-school projects so far, Nicholson said, “What we’ve found is that by combining DNA and education, those kids have a sustained change of perception over the way they view race, culture, and their own identity.” He went on to say, “So we’re actually seeing the pattern of DNA and family history making an incredible change in people’s lives, and that stays with them.” 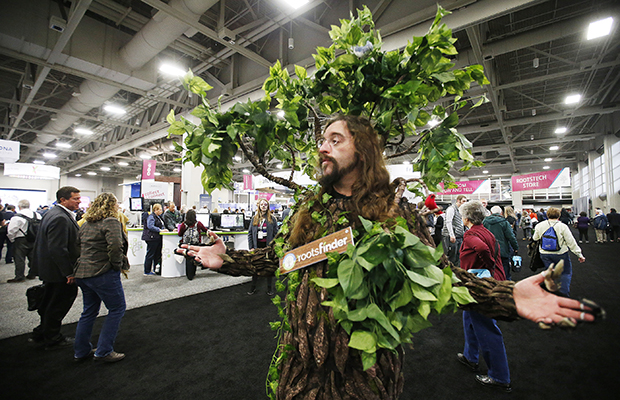 But crossing boundaries of ethnicity, culture, and time aren’t the only ways that DNA is changing people’s lives.

As Smith said, when it comes to adoptees, for example, sometimes using DNA is “the easiest way to get around what’s in closed documents.”

For many people who are adopted, the question of where they came from weighs heavily on their minds. And in cases where no background information is available through documents or histories left by their birth parents, DNA is proving capable of providing answers where there previously weren’t any.

Take for example the story of Carrie Mercer. Thirty-two years ago, as a newborn baby, Mercer was adopted by Pam Martinez of Brigham City, Utah.

And although Martinez raised Mercer with the knowledge that she was adopted, Martinez said she always knew her daughter would have questions about her background as she got older.

“She always wanted to know her ethnicity,” Martinez said. “I could see there was this hole in her heart, and I always thought love could fill it, but she just wanted to know [where she came from].”

Having been given no answers or contacts when she adopted Mercer, Martinez figured the only way they would be able to find answers about Mercer’s ethnicity was through DNA testing, but she figured that wasn’t an option for them.

“I always thought [those tests] would cost thousands of dollars,” Martinez said. “And that just wasn’t something I could do.”

Then three years ago, after hearing more about DNA testing at church, Martinez was put in contact with Julie Johnson. With Johnson’s help, Mercer was able to take two DNA tests—one with Ancestry, and one with FamilyTreeDNA.

Upon learning about her ethnicity breakdown, Martinez said they were thrilled. “She’s very colorful,” Martinez said. “She has ancestry from all over.” 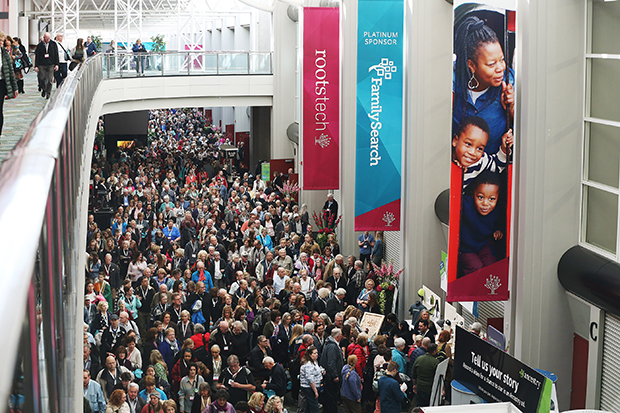 And although initially her ethnicity was all they were hoping to find, Martinez said Johnson encouraged them to look for Mercer’s birth parents. As an adoptee herself, Johnson volunteered to use her knowledge to help them search for the birth parents for free. So they decided to pursue it, but after three years of searching and comparing databases and documents, Johnson still had no leads to offer to Mercer.

It wasn’t until seven weeks ago that Johnson finally found a match.

Thanks to the decision of the biological mother’s sister to take a DNA test, the necessary chromosomal correlations finally appeared in the databases, and Johnson was able to find Mercer’s biological mother.

Although Mercer and her birth mother haven’t been able to meet in person yet, Martinez said they are planning to meet sometime this spring or summer, and she isn’t worried about it.

Speaking of her daughter, Martinez said, “She’s just someone you can bond with easily, and I’m sure she’ll bond with her biological mother when the time comes.”

And although they are excited to know more about Mercer’s ethnicity and where she comes from, Martinez said the coolest part for her was learning that they really were meant to be somehow.

“Somehow, Carrie is related to my step-dad, the dad who raised me,” Martinez said. “They are about 4th or 5th cousins away. And that’s how I just know it was meant to be.”

And although Martinez has been learning a lot from Johnson and her own research regarding family history, she said that without the help of DNA, they would likely never have been able to find Mercer’s biological mother.

Their story is just one example of how DNA really is changing the way that people are able to connect with their pasts and with their ancestors. It also speaks to the idea that Rockwood shared, that “DNA is the ultimate personal record.” As knowledge of how to use it and the technology that helps understand it advances, DNA will continue to break down barriers of history, records, ethnicities, and more. It will continue to change the way people view one another and the connections they share. And, as Smith said, with the narrative created through DNA, “we have the power to change the world.” 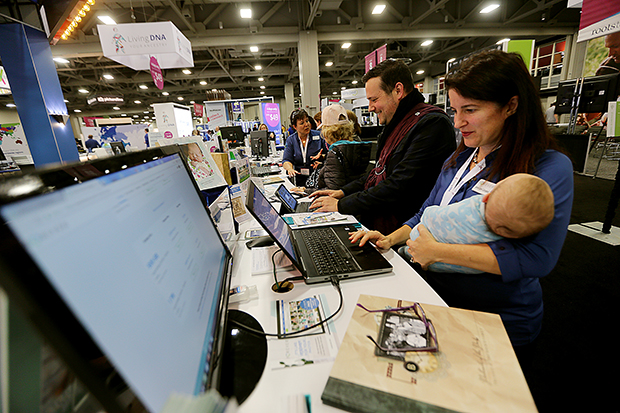 Gabriel and Jenny Lynn Campbell of Forever.com get their booth ready as RootsTech opens at the Salt Palace in Salt Lake City on Wednesday, February 28, 2018. Photo by Scott G Winterton, Deseret News. 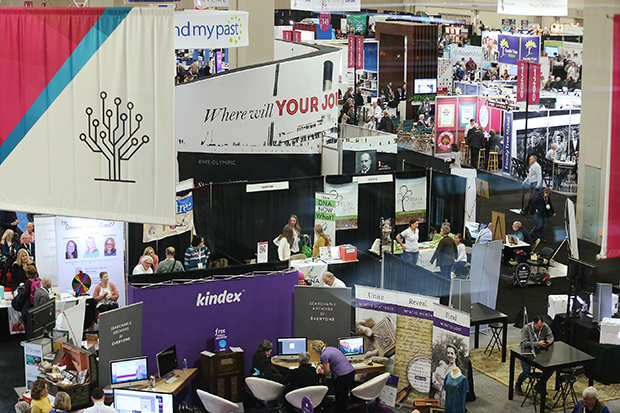 Attendees walk through the booths of the Expo Hall during the RootsTech family history conference in Salt Lake City on Saturday, March 3, 2018. Photo by Jeffrey D. Allred, Deseret News.