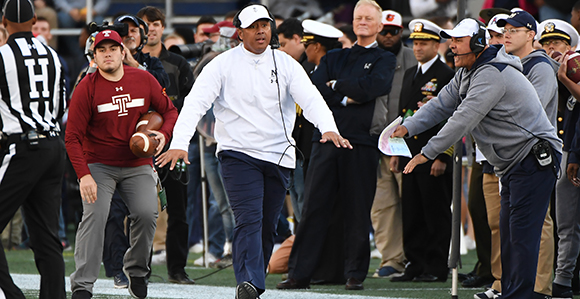 Annapolis Maryland Stake president Ken Niumatalolo said he was prepared for his ecclesiastical calling by learning to rely on the Lord during difficult moments as coach of the U.S. Navy football team. Photo courtesy of the United States Naval Academy.

As a seasoned, media-savvy leader of a D1 college football program, Ken Niumatalolo is deft at answering tough questions.

But a visiting General Authority’s soul-piercing query—posed last January in an Annapolis Maryland Stake center office—left the United States Navy’s head coach in tears: “Brother Niumatalolo, how is your relationship with the Savior?”

“I just started bawling,” he told the Church News, his voice cracking. “I remember telling [Elder Kevin S. Hamilton, a General Authority Seventy,] that I’ve never been closer to the Savior.”

First, some context. Niumatalolo’s call that day to become the president of the Annapolis Maryland Stake occurred just weeks after the Navy wrapped up a disappointing 2018 campaign. As the service academy’s all-time winningest football coach, Niumatalolo had grown accustomed to winning. He had led his team to bowl games, been welcomed to the White House, gleaned coaching honors, and—most importantly to Navy fans—beat the Army multiple times.

But the Midshipmen uncharacteristically dropped 10 games in 2018, including a season-ending loss to the Army Black Knights.

“The difficulty of the season caused me to get on my knees and ask the Lord, ‘What’s going on?’”

Praying for coaching direction was nothing new. He had often petitioned God for direction as he prepped for games, recruited athletes, and worked with his players and staff.

“But this seemed like the first time that I was not receiving anything,” he said. “I think the Lord just tested me to see where my faith was. It caused me to get on my knees even more. It caused me to ponder more and read my scriptures.”

He also devoured the words of latter-day prophets during the most challenging and confounding moments of the season. Listening and relistening to recorded general conference talks delivered by President Thomas S. Monson, President Russell M. Nelson, President Henry B. Eyring, and other Apostles eased the tumult of the moment.

Personal growth was happening even amid professional strife—readying the coach for an unexpected call to preside over a stake even while directing one of the country’s most storied football programs.

So when Elder Hamilton asked about his relationship with Christ, “I realized that I was the closest that I had ever been to the Savior,” Niumatalolo said. “I realized it was all in preparation. . . . I had to get on my knees, pray, and hear the things that were important to me.

On January 20, President Niumatalolo was given keys to preside over the Annapolis Maryland Stake, calling President Jay Sweany and President Troy Corbett as his counselors. (Elder Milan F. Kunz, an Area Seventy, assisted Elder Hamilton with the stake reorganization.)

The newly called stake president had no clue how he would manage his grueling coaching duties with a demanding Church calling.

Others had no doubt that their new stake president was up to the task.

“Of all the men in the world, he’s one of the few that could handle a college head-coaching job and a stake president responsibility,” said Joe DuPaix, an Annapolis member who also coaches the Navy’s slotbacks.

President Niumatalolo admits to briefly feeling sorry for himself after receiving the call. Where would he find the time to do both? But he quickly realized his home was just two minutes away from the stake center. His office at the Academy is just five minutes away. He’s already become adroit at wrapping up his evening football duties, taking a quick shower, and hustling to the Annapolis meetinghouse for interviews and meetings.

Since becoming a head coach, he has dedicated Sundays entirely to his family and his faith.

“The Lord knows everything. I just have to follow.”

Yes, being a college football coach and a stake president makes for long days. “But so what? There are a lot of people that have long days.”

More than six months have passed since the Annapolis stake presidency was reorganized, but the former college quarterback still feels like a rookie. But he said he’s sustained by the prayers and support of his wife, Barbara—along with his counselors, executive secretary, clerks, and the bishops and Relief Society and priesthood quorum leaders in his stake.

“I’m still learning,” he said. “I’m trying to do the best I can. You know the saying: when the Lord calls, He qualifies.”

He is also strengthened “by the many members of the stake who serve so faithfully.”

So, is presiding over a stake anything like being the head coach of a D1 football program? The president and coach said he approaches the two leadership duties differently.

“I know that there are other people that hold keys and other people who are called to serve. In the Lord’s kingdom, everybody serves. . . . The Savior is the head coach. This is His Church.”

His most important responsibility, he added, “is to try and live my life in a manner that I can hear the promptings of the Holy Ghost.”

As a stake president and a head coach, he seeks to be an example to those around him. Many of the anchoring principles of the United States Naval Academy align with the gospel—principles such as integrity and character and being a good person.

The ultracompetitive coach is quick to note he’s not perfect. “People have seen me chase a referee down the sideline,” he said, laughing. But he’s doing his best to choose the right, be it on the Navy gridiron or at the stake center.

DuPaix said his head coach and priesthood leader is doing “a phenomenal job.”

“President Niumatalolo has an amazing testimony of the gospel, and he lives his life in a way that is obedient and full of faith.”

People often ask President Niumatalolo how they can find balance in their own busy lives.

“My counsel is always simple: put the Lord first and it always works out.”

It’s still hot and steamy along the Spa Creek seawall bordering the Naval Academy’s practice field. But the autumn football season is fast approaching. Big games against the Air Force, Notre Dame, and, of course, the Army await Coach Niumatalolo and his team.

Now in his 12th year as a head coach, President Niumatalolo is counting down to the August 31 season-opening kickoff versus Holy Cross. He’s eager to, well, right the Navy’s ship. Changes have been made, and some have been difficult. But a new season brings new hope.

“I feel really, really good about this year.” 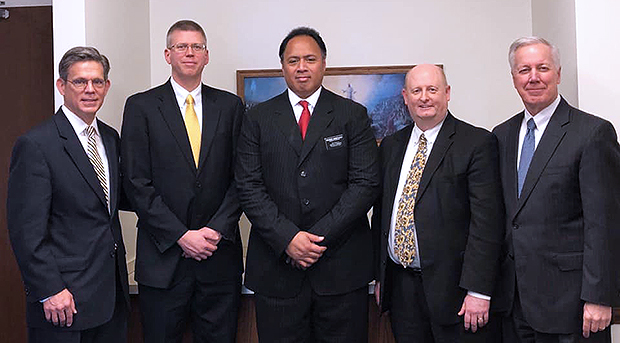 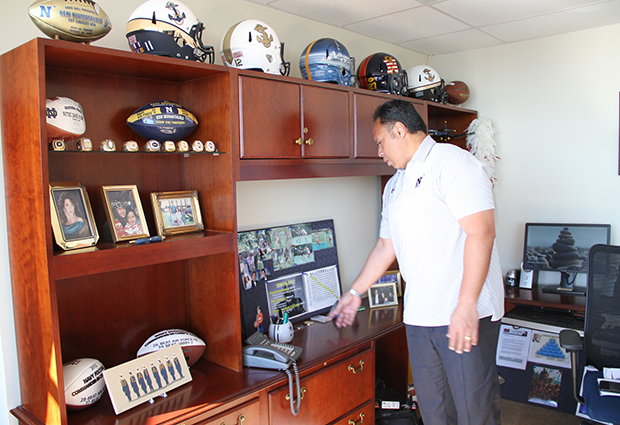 Shelves in Navy coach Ken Niumatalolo’s office are adorned with football helmets and other memorabilia reflective of his success at the U.S. Naval Academy, in Annapolis. Photo by Jason Swensen. 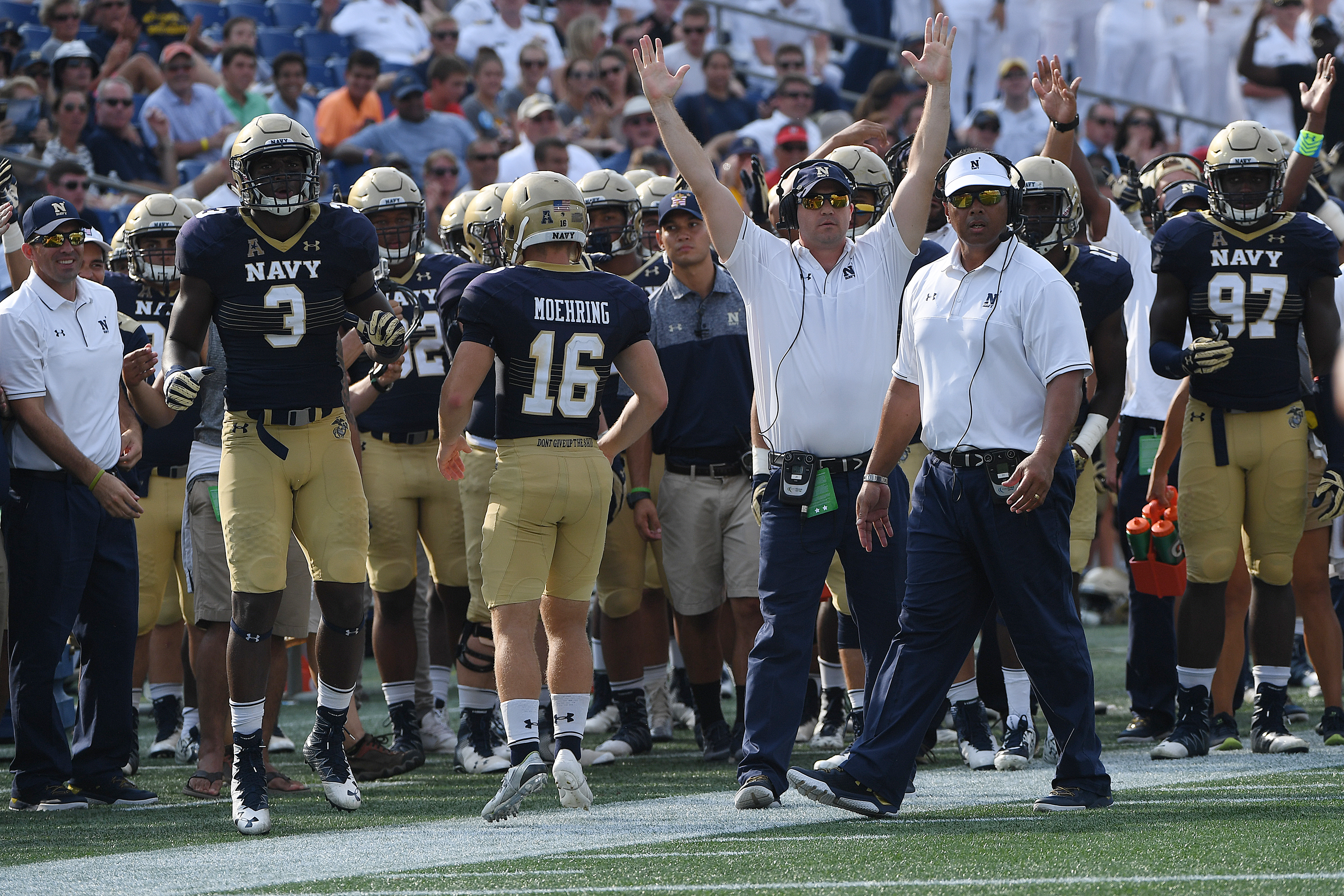