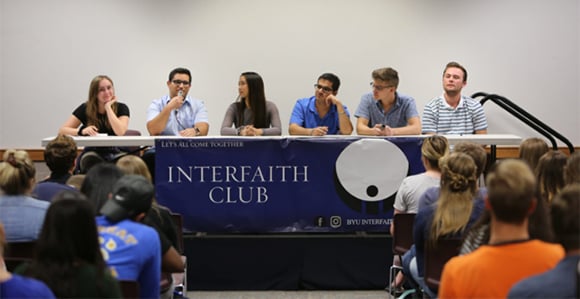 “Most of my conversations here at BYU are about religion. … There are definitely a lot of people who want to learn and get to know other religions better, and in return they want me to learn about their religion and that's something I don't mind at all.” —Laith Habahbeh, BYU student from Jordan

On the Brigham Young University Campus in Provo, Utah, there are around 33,000 students—more than 98 percent of which identify as members of The Church of Jesus Christ of Latter-day Saints. Less than two percent—some 430 students—of those who elect to attend the university identify with other religions or no religion.

And although non-Latter-day Saint students are a minority on campus, the reestablishment of an interfaith club on campus and a unique focus on religious freedom and openness has helped BYU prove itself a campus where students of all faiths feel comfortable. And in 2018, even groups outside the university—like the Christian Science Monitor—have started to take note of the unique environment created by the Church-owned university.

“The interfaith club hasn't always had a strong history,” club co-president George Garcia explained. It has appeared and disappeared over the years with the current club having been reinstated in early 2018.

As assistant dean for student life and the chaplain for non-Latter-day Saint students on the BYU campus, James Slaughter explained that the renewed club was created with ties to the religion department in the hopes that it would create more longevity for the group over the years.

Despite its fluctuating existence, the club has never had a lack of interest from the students, Slaughter said, but the demands of organizing and running the club proved overwhelming for student leaders in the past and connecting it to a department can help alleviate some of that responsibility.

Since starting up again last year, the club has hosted a number of different events to elevate the profiles of non-Latter-day Saint students on campus, including a number of panel discussions with students of various faiths sharing their experiences on campus and answering questions about how to better create an inclusive community for those of all faiths or belief systems.

“When you're in an environment where 98 percent of the students are all of the same faith, it is interesting to hear how people see us,” Slaughter said, noting that the panel events where students share their personal experiences are some of the best attended events hosted by the club. Students want to understand the perspectives of their peers, he said.

With 14 different religious or non-religious affiliations represented on campus—the largest groups of which include Protestant denominations, Catholicism, and Islam—Slaughter said the interfaith club adds to the opportunities for students of all faiths to learn from one another.

“With the interfaith club we have two goals, really,” Garcia said. “With [non-Latter-day Saint] students, our goal has been to create a sense of community for them. Quite a few of them have talked about how lonely it is here because they are outcasts. So what we're trying to do is create a sense of community for them where they [don’t] just get to know each other but know that they belong. They may not feel like they belong everywhere on campus, but they can know there is somewhere they can turn to and that there is a group where they will feel included.”

In addition to hosting student panels and monthly luncheons, the club has hosted events inviting religious leaders from various faiths to come to campus and share details of their doctrine and religious practices so that students of all faiths can learn from a variety of representations.

“The interfaith club ... raises awareness to the general public regarding issues for people of other faiths at BYU,” said Laith Habahbeh, a junior at BYU from Jordan. “I feel like when these issues become recognized, we can always take action on them.”

For Slaughter, one of the positive outcomes of the club's revival is that it has helped connect students on campus to more opportunities to learn from their peers of other faiths and learn a bit about how they might be perceived by others.

But the interfaith club isn't the only thing that is raising awareness of students of various faiths on the Church-owned campus.

Painting a picture of what it is like to be one of the 44 students who stand separated by their Islamic faith and culture among 33,000 students on the Brigham Young University campus in Provo, Utah, an article from the Christian Science Monitor, published in early November 2018, highlighted for a broad audience the unique atmosphere of the campus owned by The Church of Jesus Christ of Latter-day Saints.

Molly Jackson, the writer of the Christian Science Monitor article, shared with the Church News how she visited the BYU campus and explored some of her interests regarding religion and cultural integration.

And although there were many different aspects of the Church-owned school for her to explore and report on, she noted that the student experiences, particularly those shared by international Muslim students, were what stood out to her the most.

“There’s a bigger story to be told about those communities' relationships,” Jackson said. “It seems like labels often prevent so many of us from understanding each other or seeing each other.”

Focusing on elements like the university’s honor code, the Church’s continual defense of religious freedom for all, and the fact that Utah is the only state where Republican politicians have not attacked Islam publicly since 2015, the article highlights ways that the BYU campus proves to be a comfortable place for students of the Muslim faith, despite the fact that only two percent of students attending the university identify as non-Latter-day Saints.

For some students, the similarities between Islam and the Church, in regard to standards of living—represented by the honor code—and a shared history of experiencing discrimination for their respective beliefs and culture, are what help make the BYU campus a welcoming place, the article explains.

But while the similarities between the two religions and cultures may help break down initial barriers between the different groups as they commingle on the university campus, it is the students' willingness to understand and embrace their differences that is proving to help cultivate a better learning environment for all.

“It can be faith affirming to look for what people are learning in other traditions,” Jackson said, referencing her discussion with BYU professor Daniel Peterson, whom she interviewed for her article. “Difference is not a threat to faith. … It’s about looking for beauty and goodness where you find it. And I think that is a lesson that most Americans are hungry for right now.”

While the story Jackson wrote focused on BYU and Muslims, she said it’s a story with a bigger picture. It can extend and look at not just what the first day of coming to a new place and integrating is like for immigrants or foreign students, but what their lives and integration look like day after day and year after year as their differing cultures and communities are built side by side.

“It’s really just a story about a couple dozen college kids in an unusual environment for them and how they’re going about settling into the community,” Jackson said of her article. “But hopefully that’s something that everyone can get behind.”

Interfaith clubs and conversations about how to improve the integration of varying cultures and faiths is hardly unique to BYU, Jackson said, but the university can serve as an example of how such conversations can and should be happening on a wider scale.

“Most of my conversations here at BYU are about religion,” Habahbeh said. “I mean, there are definitely a lot of people who want to learn and get to know other religions better, and in return they want me to learn about their religion and that's something I don't mind at all. I like learning about different religions.”

Although sometimes people can get a bit pushy or defensive, Habahbeh said he tries to consider each person's perspectives and motives when they interact. “You have to look at it from a different perspective to be able to understand why people are doing this or that.”

Trying to understand another person’s intentions can help overcome tension and allow for a more constructive interaction with difficult topics like religious differences, Habahbeh said.

“Because we are in an environment where people are very well educated, I think people understand how to respect each other very well,” said Cekli Pratiwi, a student at the J. Reuben Clark Law School. Pratiwi noted that when she is off campus sometimes she notices more how people look at her.

“We have some bad experiences, but it’s not very often. Sometimes people look at me on the bus because I am wearing a headscarf. They look at me like they are maybe uncomfortable, and I know some people are prejudiced, but I can understand that because that can happen everywhere,” Pratiwi said. “People don’t always hear the truth about communities and so sometimes they are prejudiced. But I just try to smile and give a different image than maybe what they read or think they know. I hope it can change their mind and they can know we are not the people they were thinking.”

Before coming to BYU, Hind Alsboul, the freshman student from Saudi Arabia who was featured in Jackson’s article, described how many people told her to be wary of people at the university. They told her she’d be brainwashed and that she wouldn’t fit in with the Church-centered society.

“But when I came here, it’s the exact opposite,” she said, sharing her excitement for the friends she’s made and all that she has learned in her first semester. “I just hope that no one will judge people before knowing them. You just have to give everyone a chance and get to know them before you judge them or talk about them.”

Not judging before taking the time to learn about others is one of the things students are good at, Slaughter noted.

“This age group is interested in what they can do together to make things better,” Slaughter said. “That’s one of the positives. … They want to do good.” 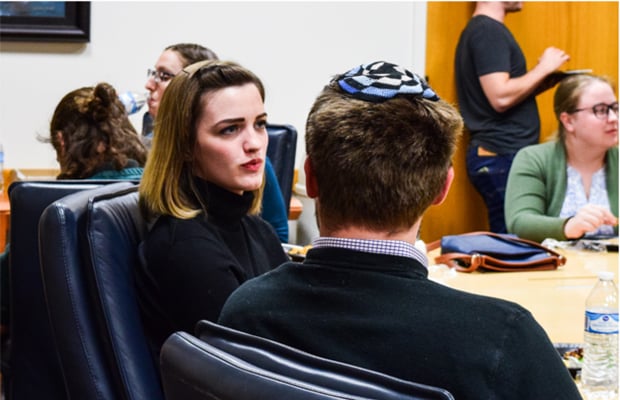