How Are You Preparing for General Conference? 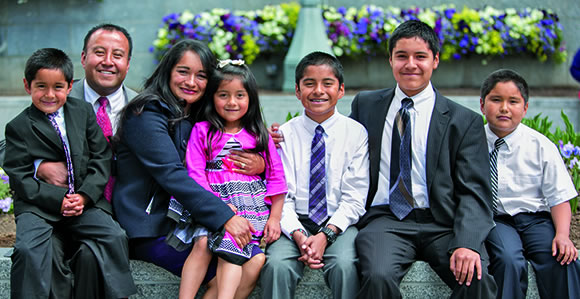 Making general conference meaningful and “a delight” takes some effort. Members around the world share what they do to prepare.

“You’re going to get more out of general conference the more you prepare for it.” —Jeffrey Meservy, Taylorsville Utah CES institute director

For Scott L. Anderson, his wife, Angelle, and their family, general conference time has a feeling of anticipation similar to Christmas. In fact, their family refers to the Friday night before the general sessions on Saturday as “Conference Eve.” For them, the opportunity to hear the voices of living prophets and apostles is a reason to rejoice.

“We feel [general] conference ought to be a primary, beautiful celebration of the year,” Brother Anderson said.

Just like the popular Yuletide holiday, general conference weekend is spent full of activities, service, food, and fun for their family, but the traditions all serve to emphasize a love of the words of the prophets.

Each morning before the start of the 10:00 a.m. session, for example, Brother and Sister Anderson’s children, and now many grandchildren, gather to eat strawberry waffles with whipped cream. “We want them to know that conference is delicious and delightful,” Brother Anderson explained. “We just love it. Conference is an absolute joy.”

But making general conference meaningful and “a delight” takes some effort.

Jeffrey Meservy, director of the Taylorsville Utah CES Institute, said, “You’re going to get more out of general conference the more you prepare for it.”

Brother Anderson, who taught in the Church Educational System for 40 years, said his family often talks about the amount of preparation the Apostles and General Authorities put into their talks. “Are we using the same amount of work to receive what they say as they’re using to prepare and give us what they’ve received?”

For many members, especially those listening in chapels and Church buildings far from the Conference Center in downtown Salt Lake City, participating in general conference requires extensive physical preparations.

Gibson Guzha, who attends the Marimba Park Ward in Harare, Zimbabwe, with his wife, Paida, and their 2-year-old daughter, Keira, said arrangements to listen to general conference begin well in advance. The facilities manager and local Church leaders ensure their chapel is equipped with a generator, since their area is often troubled by power shortages. Brother Guzha helps his wife with cleaning and ironing their clothes the day prior and then wakes early to warm water for everyone to use for bathing.

Their chapel is often crowded with two to four wards that gather to listen as the sessions are projected on a white board at the front. He and his wife try to be an hour early so they can have a good seat. The physical preparations, Brother Guzha noted, can have a direct impact on his spiritual preparation. “This is the most difficult part—trying to be on time and also [be] patient with my family and trying to maintain a good foundation atmosphere for the Spirit.” 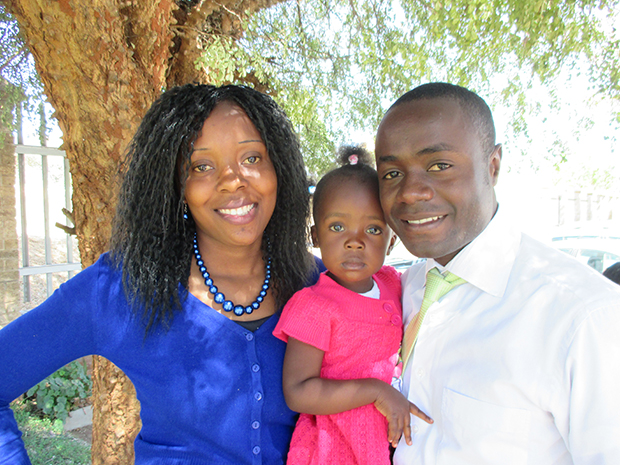 Gibson Guzha of the Marimba Park Ward in Harare, Zimbabwe, with his wife, Paida, and 2-year-old daughter, Keira. Photo courtesy of Gibson Guzha.

Brother Meservy said part of being prepared for conference is being in a position to listen. No matter where individuals are participating—whether from home, in the Conference Center, or in their local Church building—if they listen with a prayer of faith, they will be able to receive personal revelation.

“We counsel students to list personal questions or concerns … and then to specifically listen for those answers during general conference,” Brother Meservy said.

He also encourages his students to take notes, not so much on what the speakers say, but their own thoughts and feelings and impressions. (Help teens get more out of conference with these resources.)

Carli Hanson of Provo YSA 4th Ward, Provo Utah YSA 1st Stake, said she plans to create a general conference quote wall by writing down things that are personally meaningful on note cards and then hanging them on a wall.

“It [is] a very accessible way to review general conference daily. Plus, Heavenly Father can use the efforts we put into it to help us later on,” she said.

For Julia Clendon, conference preparation includes a week of temple attendance. Sister Clendon’s stake in Christchurch, New Zealand, is assigned two weeks a year to travel to the Hamilton New Zealand Temple. It just happens that the October assignment falls the week before general conference.

“Going to the temple for a whole week is the best thing ever,” she said. “You’re in that spiritual environment away from the world [where] you’re actually able to remember and focus on things that matter.”

Having that focus helps her later as she listens to conference to recognize the promptings of the Spirit, Sister Clendon said.

Tracy Williams, director of the Salt Lake City Utah University Institute, said part of preparing for the upcoming general conference is studying the last general conference. “Be a student of conference talks,” he said. “It sends a message to Heavenly Father whether we take serious the messages that are delivered to us. If I study it well, and I come prepared, then I’m not treating lightly the revelation-type things that He has given me.”

The real goal of individuals’ preparation, Brother Anderson noted, is to receive deeply not only the message but also the spirit of what is being said and to strengthen personal spiritual commitment. “We’ve had a slogan in our family: LDS, which stands for ‘Let’s Do Something.’ We want to do something with what we’ve heard and apply it.”

As the mother of four children, ages 8 to 5 months, Jane Deeds knows the battle it can be to wrangle little children through eight hours of conference.

Every conference she tries different activities—from conference bingo to word games to crafts—to help them stay engaged. Some of them work, some of them don’t, she noted, but she continues to search for ideas from magazines, websites, and other parents. (Print conference notebooks and other activities for children.)

Sister Deeds, a member of the Farmington 12th Ward, Farmington Utah Stake, said one thing that has resonated with her children has been helping them memorize the names and photos of Church leaders. In a family home evening before conference, she and her husband will take the General Authority chart from the Ensign and study it with their kids. (Download a PDF here.)

“That way when someone is speaking, [our children] love to go and find them on the chart,” she said. 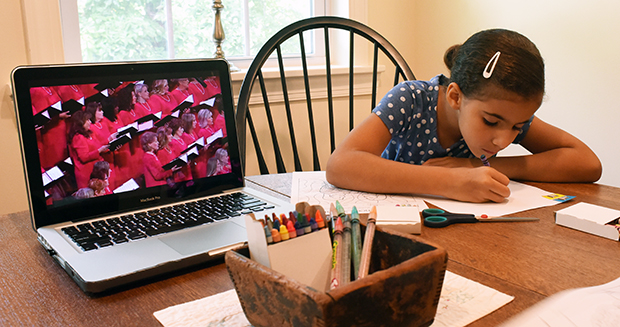 A young girl colors while listening to general conference. Remember that a child’s attention span is about one minute longer than their age.

When Brother Anderson’s children were young, he and his wife tried many different activities to include them in conference. One year they built a large tent out of blankets and put the television on a tower so that, like the people of King Benjamin in the Book of Mormon, they listened to the words of the prophets with their tent pointed to the tower.

“The important thing is that we share the joy of it and not just the duty of it,” Brother Anderson said. “Little kids aren’t going to sit still for eight hours of general conference, and I don’t think we can expect such a thing. But we try to make it fun, to make it a celebration. Then afterwards we talk about it and process it.”

Be realistic, Brother Anderson advised. “A child’s attention span is about one minute longer than their age. Sometimes you have to change activities and do things differently. A lot of the time it helps to review things afterwards.”

Eventually, it pays off. “My children just love conference now and do even better things with their families,” Brother Anderson said.

Ultimately, the purpose of all the preparations is to allow Heavenly Father to bless you, said Brother Anderson.

Brother Guzha said that he has learned something new every time he has watched general conference. “I have great faith in our Heavenly Father and our Redeemer, and I know no matter who is assigned to speak during these sessions, it will be the Lord speaking through the assigned speakers. May each of us prepare spiritually and physically and help our families in any way that we can to make this a special day,” he said.