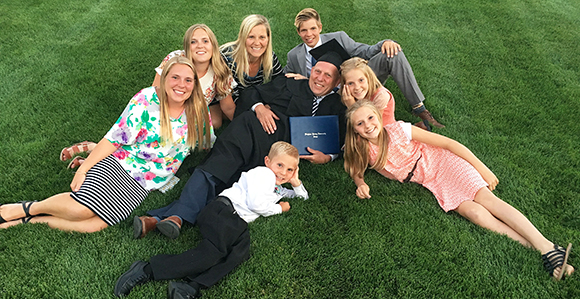 Receiving an education centered around the knowledge that God created the world and the people in it and that He wants all His children to return to Him is a special opportunity.

As the parents of six children, with a beautiful house in Arizona and a steady job to support them, Tom and Rolayne Waldron knew they had a great life. But both of them felt something was missing.

With his two oldest daughters, Sommer and Genna, going into high school, Tom said he felt a bit like a hypocrite every time he would talk to them about the importance of getting good grades and going to college.

“I had not finished my degree,” Tom Waldron said. “I had struggled as a student. Reading and writing are a struggle for me, and so my grades were not stellar.”

Tom had a successful 30-year career as a master automotive technician with Toyota dealerships. He had taken every opportunity he could to further his education as a technician over the years through work, but he had never finished college, and neither had his wife.

Wanting to set an example for their children—Sommer, Genna, Grant, Emma, Taylor, and Levi—both Tom and Rolayne Waldron began to feel the need to return to school and finish their degrees.

At that time, nearly six years ago, the idea of returning to school seemed like an impossible feat. Neither Tom nor Rolayne Waldron were sure where to begin or how to juggle their roles as parents and providers with returning to school.

That’s when Rolayne Waldron met a couple of BYU–Pathway missionaries—a chance encounter that changed everything for the Waldron family and set Tom Waldron on a path to become a BYU–Idaho professor.

A New Pathway for Education

In 2013, after meeting with the Pathway missionaries, the Waldrons decided to enroll in the PathwayConnect program together as their first step to returning to school. The program was affordable and, with most of the course work done online and at home, it seemed like a good way to restart their education and figure out how to balance being students with work and parenting.

Even with the flexibility of the program, that was never an easy balancing act, Tom Waldron said.

Often the Waldrons would spend their evenings helping their children with homework until 10:00 p.m. Then, after putting the kids to bed, they would rush to complete their own homework assignments before an 11:59 p.m. deadline. Other nights they were up until 1:00 a.m. studying together before Tom Waldron would have to get up at 6:00 a.m. to leave for work.

“I just felt like both of us were sustained, that the Lord was blessing us as we were up late and working hard to finish this and that we are blessed to be able to just, on a few hours of sleep, get the things done that we needed to get done,” Tom Waldron said. “I just feel that the Lord was with us to help us to get through that.”

There were also moments where, because of what they were studying and what their high school kids were studying, Tom and Rolayne Waldron were able to share in the learning process with their children.

Rolayne Waldron said she can recall a few instances where their oldest daughters were able to help her and Tom Waldron with some of their math homework.

“It wasn’t always like that,” she said, “but there were cool moments.”

After completing the PathwayConnect program, Rolayne Waldron was anxious for her and Tom Waldron to continue their education by enrolling at BYU–Idaho.

“It’s interesting how the Spirit has to work with with us differently and . . . , you know, we all just learned differently,” Rolayne Waldron said. “I just knew that we needed to be in Rexburg. . . . I just was full speed ahead and praying all along.”

It seemed like a crazy idea. In Rexburg, Idaho, they didn’t have a house or a job. In Arizona they had both. But Rolayne Waldron couldn’t shake the feeling that they needed to be in Rexburg.

True to his practical side, Tom Waldron, on the other hand, wasn’t convinced that moving their whole family without a sure plan for how to make things work was a good idea. As a self-proclaimed “nuts and bolts” guy, he wanted to know where they’d live, what job he would have, and how they would balance being full-time students with supporting their family.

It took a lot of convincing from his wife and a lot of personal prayer, but eventually, Tom Waldron said, he got a confirmation to go.

“I just got this confirmation from Heavenly Father that said, ‘Don’t worry, I’ll take care of you.’ And that was pretty powerful to me. So I really knew I needed to take that leap of faith and trust in the Lord that He will take care of us,” Tom Waldron said.

Their years in school were stressful and never easy, the Waldrons said, but all along the way, they could see the helping hand of the Lord in their lives.

In 2017, Tom Waldron graduated with a bachelor of science degree in automotive technology management and then enrolled at Western Governors University for a master’s degree in management leadership and will finish that degree this fall, pending his last assignment.

Rolayne Waldron graduated in 2018 with a bachelor of science degree in marriage and family science.

Following his graduation, Tom Waldron took on a part-time job at BYU–Idaho as an adjunct professor teaching automotive technology while he continued in his master’s program.

When a full-time position in the same department became available last year, he decided to apply and, after an intensive interview process, was offered the position.

He will begin teaching later this month as a full professor at the university and, as such, will be the first Pathway graduate to become a full-time professor at BYU–Idaho.

Blessings of a Secular and Spiritual Education

This year marks the 10-year anniversary for PathwayConnect—which, in 2017, transitioned from being housed within BYU–Idaho to the newly formed BYU–Pathway Worldwide. Since beginning a decade ago, the programs offered through BYU–Pathway have grown significantly—from 50 PathwayConnect students in the United States to more than 45,000 students in 134 countries annually enrolled in PathwayConnect and online certificate and degree programs from BYU–Idaho. BYU–Pathway Worldwide is also now the largest institution of higher education in the Church Educational System, surpassing Brigham Young University in Provo, Utah. And earlier this year, BYU–Pathway announced preapproval for the enrollment of all returned missionaries, as well as virtual classrooms, which make the program more widely available around the world.

“Some people mistakenly believe PathwayConnect is a remedial college program,” said J. D. Griffith, vice president of administration for BYU–Pathway Worldwide. “It is not. It is actually university-level work that prepares students to continue toward a degree when they finish PathwayConnect. Individuals like Tom are a testament to what PathwayConnect can do in people’s lives.”

As Tom Waldron explained it, everyone who ends up at BYU–Idaho had taken a unique path to get there. His story, as a student and as a new professor, is just one among many, he said.

But for anyone who has thought about starting, or is thinking about starting, on a path toward higher education through the BYU–Pathway programs, the Waldrons’ story is an important example of what can be achieved.

For Tom Waldron, the difference in his education with PathwayConnect and then with BYU–Idaho came from the integration of the spiritual and the secular learning that is offered through the Church universities and education systems.

Receiving an education centered around the knowledge that God created the world and the people in it and that He wants all His children to return to Him is a special opportunity, Rolayne Waldron added.

“It has been a huge blessing for our family to be able to be part of the BYUI Pathway program—now Pathway Worldwide,” she said. “What a blessing it brings to so many who would not otherwise have that opportunity because they can’t come here [physically].” 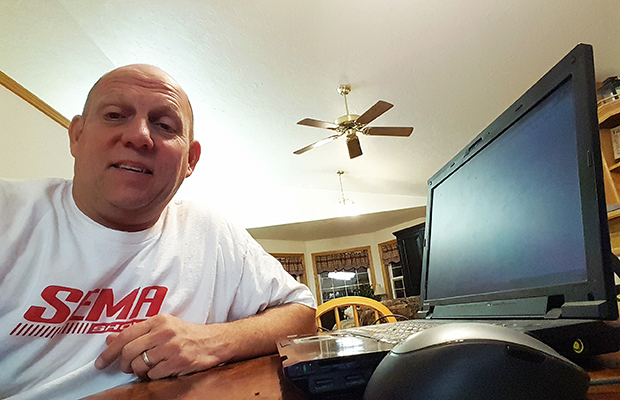 Tom Waldron during one of his late-night study sessions as a student with BYU–Pathway's PathwayConnect program. Photo courtesy of Tom Waldron.

The partnership between Pathway and BYU–Idaho is changing lives all over the world, said BYU–Idaho academic vice president Kelly Burgener. “It’s lifting people into a place of greater confidence and self-reliance, and it’s blessing the ongoing work of the Church all over the world.”

Tom and Rolayne Waldron are examples of how that education can help better the lives of anyone, no matter their stage of life. Even with a significant and successful career, the Waldrons realized that education could still improve their lives and the lives of their children.

Their decision made a significant impact on their family, of course, but it will also continue to make an impact on Tom Waldron’s students over the years, Burgener said. “His professional and educational experience is going to be fantastic in the classroom.”

Despite having felt their shortcomings as students in the past, both Pathway and BYU–Idaho offered the Waldrons the chance to start their education again in a new way, with more hope for success.

That’s the beauty of combining spiritual and secular education, Rolayne Waldron said. “I think if we put ourselves in the Lord’s hands and let Him guide us, He can make more of us than we ever could of ourselves, and it will be better—they will be better paths than we would choose for ourselves.”