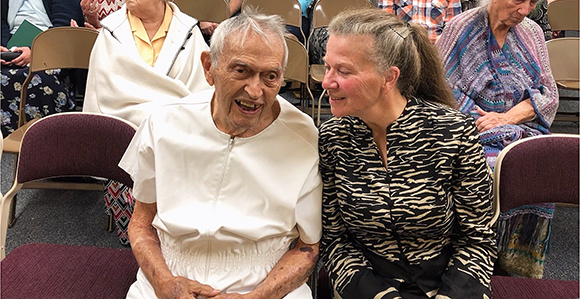 Albert Lane on the day of his baptism. He was baptized at 96 years old. Photo courtesy of Albert Lane.

“To love your neighbor—your fellow men—is the key.” —Albert Lane

For Howard Wimberly of Greenwood, Florida, being friends with Albert Lane, a 97-year-old World War II veteran, has taught him one thing: it’s never too late in life to come unto Christ.

Born in Lansing, Michigan, in 1922, Lane has lived somewhat of an exciting life for a Michigan farm boy. At age 19, he joined the U.S. Army Air Corp. During WWII, Lane flew a B17 bomber on 25 missions to bomb Berlin. On one such mission, Lane was nearly shot down by a German jet but was rescued at the last moment by the famous Tuskegee airmen, who helped fly him to a safe landing.

After returning home from the war and marrying his longtime sweetheart, Dolores (who he affectionately called Laurie), Lane took a job with General Motors. There, he helped in the development of the Corvette and helped initiate the addition of radios and air-conditioning to pickup trucks. And when Lane retired, the couple moved to Florida.

Although his family had never been particularly religious and he was never much of a churchgoer himself, even during his later years, Lane said he always knew Christ was his Savior and he strove to follow His example.

“I learned about God at about 15 years old,” Lane said. And if there is one thing about the gospel of Christ he has always understood, it’s the principle of love.

“L-O-V-E,” he said, spelling it out. “To love your neighbor—your fellow men—is the key.”

Perhaps Lane’s understanding of that principle was why a year after moving to a new neighborhood in Greenwood, he sought solace in the kindness of his neighbors following the passing of his beloved wife after 63 years of marriage together.

Still new to the community, Lane said, he hardly knew anyone, but his neighbor Phyllis Bowman, who lived just down the street from him, began inviting Lane to her house each week for dinner. For Bowman, inviting Lane was simply the neighborly thing to do. For Lane, visiting the Bowmans was generated by his eagerness to get acquainted with people.

Bowman and Lane got along well, and it wasn’t long before the two considered themselves best friends.

Bowman even made Lane a promise that as long as he was able to get up out of bed and use the bathroom on his own, she would help make sure he was able to continue living in his own home.

“And we have a wonderful group of people that come in and help him,” Bowman said. “He’s quite an incentive to all of us.”

It was through Bowman, a member of The Church of Jesus Christ of Latter-day Saints, that Lane first became acquainted with the missionaries. Because her conversations with Lane often focused on the topic of religion and because she had the sister missionaries over twice a month for dinner, she began inviting Lane to meet with them.

“Mr. Lane started coming over and enjoying their company and listening to our conversation and participating,” Bowman said. “And when he got more interested in hearing more about the Church, we scheduled to have the elders come to his house and have the discussions with him there.”

Although Lane showed great interest in learning about the Church and meeting with the missionaries, he admits he went through several pairs of missionaries before actually accepting an invitation for baptism.

“In the beginning of the discussions . . . he was a little bit wary that if he joined the Church, he may leave his wife and family behind because they weren’t members as well,” Bowman explained. “So the missionaries just explained how they could be sealed together in the temple and live together for all of eternity. So I think after he was able to understand that concept and think about it and pray about it, it helped him make that decision of being baptized and work forward towards being sealed to his wife and family.”

Lane was baptized at 96 years old on March 10, 2019, nearly three years after first meeting with the missionaries, Bowman said. And now he is working hard to do his family history work and prepare family names to take to the temple.

For Wimberly, who became acquainted with Lane around the time he started meeting with the missionaries, Lane’s dedication to the gospel and doing family history work since his baptism has been a great example of making the most of the time one has.

Lane has turned in the names of his family members going back hundreds of years so that their temple work can be done, Wimberly explained. “And he is very interested in being sealed to his wife forever, so we’re working on that now, . . . and he’s patiently waiting.”

The youth in their ward are taking Lane’s wife’s name to the temple this month, Bowman said. Once the baptism is done, Bowman said, she hopes to accompany Lane on his first trip to the Birmingham Alabama Temple around Thanksgiving so that he can finally be sealed to his wife.

“He’s still spunky,” Wimberly said. “I’ve known him for several years now, and the thing that stands out to me is . . . he has a lot of disabilities because of his age but he is as faithful as can be about coming to Church, so really we shouldn’t have any excuses.”