Cheryl Driggs, Jan Chappell, Jim Siebert, and Morton Large at the ”Ready or Not“ emergency hurricane preparedness event in Houston on May 31.

Eighteen stakes in the Houston area contributed to “Ready or Not,” a free family hurricane preparedness event in Houston, Texas, this summer.

The annual conference coincides with the beginning of hurricane season, which stretches from June 1 to November 30.

Dr. Richard Knabb, the National Hurricane Center director, in his third appearance at the annual event, touted it as the largest and best organized in the country, drawing as many as 5,000 attendees. “This really is a model of what a metropolitan area can and ought to do to reach out to families while they learn what each person and family can do to get ready for the next hurricane,” he said. The area covers 5,500 square miles and 85 cities and towns surrounding the Houston region, according to David Baker, division vice president of Distribution Electric Operations for CenterPoint Energy.

Harris County judge Ed Emmett of the area emergency response team and a speaker at the workshop lauded the Church and its preparedness efforts. “I’ve toured the Church facilities and know about the semis and supplies ready to be disbursed. It’s phenomenal.” Judge Emmett worked closely with the Church in the aftermath of Hurricane Ike in 2008 and was impressed with how members “took care of their own and then reached out to the community.”

Fundamentally following the Church’s emergency preparedness plan, the conference highlighted four protective tasks: make and practice an emergency plan, build an emergency kit, stay informed, and know your neighbors. The Church sponsored one of 70 booths from a variety of civic and private vendors. The booth was staffed by sister missionaries and public affairs personnel, and attendees were treated to preparedness and provident living information and examples and were referred to Church websites and links.

Two significant additions were made to the workshop this year. One was the inclusion of planned activities for Boy and Girl Scouts toward earning their Emergency Preparedness merit badge. Boy Scouts Conner Dixon and George Kutac encouraged Scouts to use the workshop to complete the new Emergency Preparedness badge. In keeping with the Boy Scout Motto of “Be Prepared,” Kutac said, “We like to help others a lot, and we’re prepared to do that now in case of an emergency.”

Also, for the first time, there were four sessions presented entirely in Spanish, along with ASL, closed captioning, and Spanish translation for all sessions. According to 2010 census data, Harris County has the second largest county population of Hispanics in the United States. Spanish-speaking Church membership is also increasing, with 14 wards and three branches in two Spanish-language stakes in the Houston area alone, plus many more Spanish-speaking wards and branches in the conference’s geographic region.

Even the “Kid Zone” workshop included information presented in Spanish as well as English. In the Kid Zone, the “Ready Super Hero” team presented how youth can help prepare for a storm. Booths including a make-it-yourself toolbox and interactive learning added to the family-friendly atmosphere of the conference.

In his remarks, Judge Emmett reiterated the importance of each family having a preparedness plan. When asked if he viewed the contributions of The Church of Jesus Christ of Latter-day Saints as being valuable to family hurricane preparedness in the Houston area, Judge Emmett replied with a resounding “Yes.” 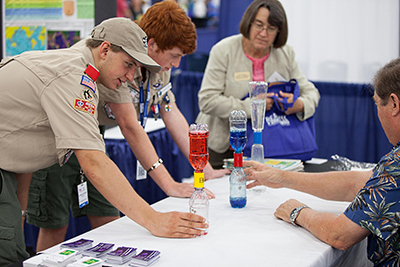 Scouts participate in a preparedness demonstration at the ”Ready or Not“ emergency hurricane preparedness event in Houston on May 31. Photo courtesy of Jennifer Martino. 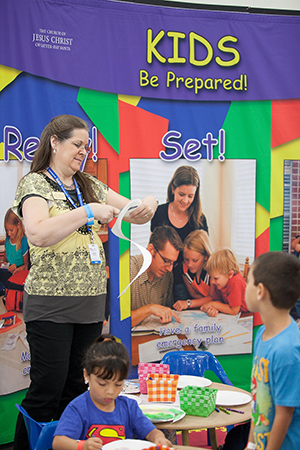 Sister Linda Hayes works with the youth at the Church’s Kid Zone at the ”Ready or Not“ emergency hurricane preparedness event in Houston on May 31. Photo courtesy of Jennifer Martino.