“Hosannah!” Church to Have 150 Operating Temples 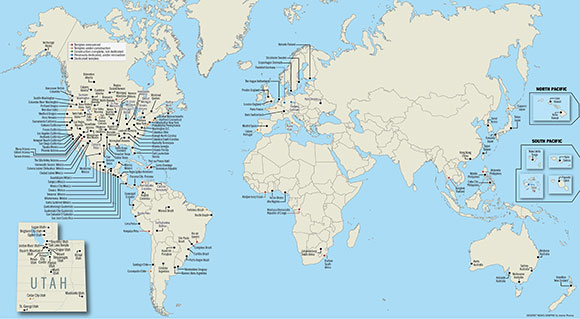 View a larger image. After the dedication of the Provo City Center Temple on March 20, the Church will have 150 operating temples, 5 temples undergoing renovation, 12 temples under construction, and 11 announced.

Since the dedication of the Kirtland Temple in 1836, Latter-day Saints have joined together in shouting “Hosanna” in celebration as each new temple becomes a dedicated house of the Lord.

On March 20, days before the 180th anniversary of the dedication of that first temple since the Restoration of the gospel, Church members will again gather to celebrate another dedicated house of the Lord—the Provo City Center Temple—as it becomes the Church’s 150th operating temple.

Located only three miles from the Provo Utah Temple, the Provo City Center Temple is—as are all other temples—a testament of faithful Church members around the world.

“We are a temple-building people,” Elder Kent F. Richards, General Authority Seventy and Executive Director of the Church’s Temple Department, told the Church News just days before the start of the open house for the Provo City Center Temple. “Temple building has always been a high priority.”

Calling temple work “the great work of the latter days,” Elder Richards spoke of the need for temples around the world as Church members respond to the sacred call to attend the temple for themselves and for family members who did not receive the blessings of the temple during their lifetimes.

Temples today are as unique as the members who attend them, ranging in size and design. Although the look of the buildings may differ, the sacred work done inside remains the same. No matter the locale, any time a new temple is completed Church members join together in celebration and gratitude for the opportunity to perform sacred ordinances of eternity.

“It’s beyond what I can describe,” Elder Richards said of the members’ reaction upon receiving a newly dedicated temple in their area. “They are so grateful. They are so humble. They are tearful. We can see it even in the celebration when the youth come together and they just bubble over with enthusiasm and joy and excitement about having a temple.”

Throughout history, the Lord has commanded His people to build temples. In the sacred buildings people make covenants and take part in saving ordinances of eternity. Because of the necessity of these ordinances, the Lord has provided—and continues to provide—temples around the globe.

A dedicated house of the Lord

In the Church’s first 150 years, 21 dedicated temples dotted the globe. Beginning with the Kirtland Temple (which is no longer owned by the Church or functioning as a dedicated temple and not included in the 150 count), the building of temples has been an important focus of Church members wherever the Saints have lived.

With a growing number of Church members outside of Utah, temple building began to expand to areas outside the state. More than 25 years after the Salt Lake Temple’s completion, the Laie Hawaii Temple was dedicated in 1919 (prior to Hawaii’s statehood in 1959) and the Cardston Alberta Temple became the Church’s first international temple in 1923. Over the years more temples have been added to the list—including the first temple in Europe, the Bern Switzerland Temple, in 1955—providing members with temples throughout the United States and many other countries.

Although temples have always been a part of the gospel—both anciently as well as after the Church’s official organization in 1830—it has been in the last two decades that more temples have been available for a growing, international Church.

In 1998, President Gordon B. Hinckley announced during general conference a goal to have 100 temples operating around the world by the end of the century. With less than two years to achieve the massive undertaking of building 49 temples—two less than the operating number at the time—President Hinckley announced 30 “smaller temples” to be “built immediately” around the world.

“If temple ordinances are an essential part of the restored gospel, and I testify that they are, then we must provide the means by which they can be accomplished,” President Hinckley said. “All of our vast family history endeavor is directed to temple work. There is no other purpose for it. The temple ordinances become the crowning blessings the Church has to offer.”

On October 1, 2000, President Hinckley dedicated the Boston Massachusetts Temple—making it the Church’s 100th temple. Two more temples would be dedicated before the year's end.

“[The First Presidency] hasn't had a specific number goal since that time … but they obviously have a great desire to continue to extend the opportunity for members around the world to attend the temple,” said Elder Richards. “President Monson has this kind of goal of getting a higher and higher percentage of members access within a 200-mile radius. We are now at 85 percent, and that’s a marvelous achievement, but that doesn’t mean we are there yet.”

Three years after being sustained as prophet, in April 2011 President Thomas S. Monson spoke of the importance of temples in his general conference talk . Looking to the words of President Joseph F. Smith, President Monson shared a part of his predecessor’s talk from a general conference in 1902.

“In his opening address [President Smith spoke of] the hope that one day we would ‘have temples built in the various parts of the [world] where they are needed for the convenience of the people.’ … The goal President Joseph F. Smith hoped for in 1902 is becoming a reality,” President Monson said. “Our desire is to make the temple as accessible as possible to our members” (“The Holy Temple—a Beacon to the World”).

Although much of the Church is now within a 200-mile distance of a temple, there are still some Church members who live in areas that take great sacrifice to travel and attend the temple.

“We will continue to work with the First Presidency to look for the right opportunities for the inspiration to come … to be able to announce additional temples going forward in the future,” Elder Richards said. “In the Lord’s due time He will continue to provide temples. I think He’s able to do it because of the faithfulness of the Saints—not only in their tithing faithfulness, but in their use of the temples so that the ordinances justify the building of the temple.”

Whether it has been actually physically building a temple or long and often expensive travel arrangements, over the years Latter-day Saints have made sacrifices large and small to attend the temple. Although sacrifice today may look a little different from that of the Saints in the 1830s, it is an important element to temple worship. Oftentimes it is the sacrifice—whether it be repentance, travel, tithing, or time—that gives patrons an even greater experience in the Lord’s house.

“Sacrifice is a sign of our covenant,” said Elder Richards. “I think it is evidence to the Lord of our true heart’s desires, that we allow our faith to have expression and, therefore, the Lord can bless us even more.”

A house of instruction

It is also important to understand that every temple holds a significant purpose and meaning and is meant to be a house of instruction where members are to return often, Elder Richards said.

“It is not just to use one time,” he said. “It is to help fulfill this grand overarching purpose of the great work of the latter days, so that all of us feel the responsibility of our own salvation and that of our family and that of our extended family.”

While the attractive landscape and view of temples are usually exciting additions to local communities around the world, it is important for Church members to remember the primary purpose of the beautiful buildings is to help people make eternal covenants with their Heavenly Father and to seal families for eternity.

“Temples are built to bless individuals and families,” said Elder Richards. “It is one thing to build it for a community or for a nation or for a large number of people. … Ultimately the blessings come to the individual and the families who take advantage of going to the temple and learning and feeling the purpose of the temple in their own lives.”

After the dedication of the Provo City Center Temple on March 20, the Church will have 150 operating temples, 5 temples undergoing renovation, 12 temples under construction, and 11 announced.

Click on the image below to view a larger map.

A map of the world shows current temples, temples being renovated, announced temples, and temples under construction. Image by Aaron Thorup, Deseret News.