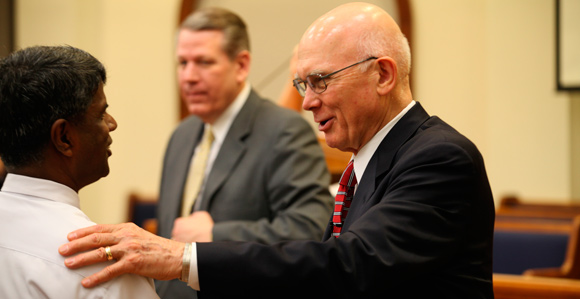 “You are small in number, but you will not be small in influence if you retain your uniqueness like salt with savor or leaven that lifts the loaf.” —Elder Dallin H. Oaks of the Quorum of the Twelve Apostles to members in Hong Kong

Elder Dallin H. Oaks of the Quorum of the Twelve Apostles, Elder Donald L. Hallstrom of the Presidency of the Seventy, and Bishop Dean M. Davies, Second Counselor in the Presiding Bishopric, spent 12 days traveling in the Asia Area during the month of May. Stops on their historic visit included the first priesthood leadership conferences held in Singapore and Cambodia, devotionals in Hong Kong, a district conference in Taiwan, a young single adult conference in India, and the creation of India’s first stake, in Hyderabad. (Church News and Events will post additional information about the Hyderabad India Stake in coming days.)

This visit was particularly meaningful for many Asian members as they reunited with Elder and Sister Hallstrom, who lived in Hong Kong from 2005 to 2009 when he served in the Area Presidency and as Area President.

On Saturday, May 19, 2012, the visiting Brethren were accompanied by Elder Watson and Elder Victor Kah Keng Chen, an Area Seventy from Singapore, as they met with local Singaporean and Malaysian priesthood leaders, members, and missionaries. The eight district presidencies from Malaysia gathered together for the first time as they traveled to join Singapore Stake leaders in being taught by an Apostle—the first such opportunity for most of the men.

In the afternoon priesthood conference Elder Oaks said, “Because of Church growth, it is extremely rare to have this many General Authorities at a leadership meeting of this kind. This group represents the Presiding Bishopric and all the Quorums of the General Authorities, with the exception of the First Presidency.”

He told those in attendance that “Singapore and Malaysia are just as close to Heaven as Church headquarters in Salt Lake City.” He went on to say, “It is the same priesthood [and] the same authority, and each of us is entitled to receive inspiration and revelation for our respective stewardships.”

Singapore Stake auxiliary leaders were instructed by Sister Oaks, Sister Hallstrom, Sister Watson, and Sister Davies that same afternoon. Sister Oaks taught, “Women should be full participants in stake and ward councils so all leaders can better minister to the one in the work of salvation.”

On Saturday evening more than 800 Saints gathered in the stake center previously dedicated by Elder Hallstrom. He spoke of the vision, commitment, and self-discipline of the Singaporean members.

Elder Oaks emphasized the need for families and individuals to embrace gospel standards in a world that often challenges righteous living. He highlighted individual conversion and a testimony of Jesus Christ as the foundation for genuine personal growth. He also taught about mercy in redemption’s grand design—“mercy from Him who satisfied the law of justice.” Long lines of Saints waited to shake hands with the visiting authorities afterwards.

More than 1,000 Cambodian Saints gathered that evening for a devotional, where Elder Oaks taught that if members have the faith to pay their tithing they will be blessed to work themselves out of poverty. He explained that 90 percent of their income accompanied by the blessings of the Lord was better than 100 percent of their income without the blessings associated with being a full tithe payer.

He also invited members to keep and maintain records of sacred and special events as part of their personal and family histories.

Elder Oaks and those accompanying him arrived at the Asia Area office in Hong Kong on Tuesday for devotionals with staff, missionaries, and all members.

Nearly 1,300 Saints gathered at six meetinghouses for a member devotional and webcast. It was noted that Elder Perkins has received a new assignment in Salt Lake City after serving for five years in the Asia Area Presidency. He was thanked for his inspired leadership and in turn he expressed his love and respect for the Asian people and “the faithful Latter-day Saints who are pioneers in these populous nations.”

Elder Oaks counseled Hong Kong members to seek more from life than prosperity, prestige, power, or pleasure. “Worldly people only see the here and now. People of faith look forward and plan for eternity, he said. He added, “You are small in number, but you will not be small in influence if you retain your uniqueness like salt with savor or leaven that lifts the loaf.”

While in Hong Kong the visiting Brethren reviewed Church progress with the Asia Area Presidency, who have responsibility for 25 countries and territories that comprise one-half of the world’s population.

Following the Area review, Elder and Sister Gong and Bishop and Sister Davies went to Taiwan, where they met with staff and missionaries in Taipei, and with members and leaders during a weekend conference of the Chia Yi Taiwan District.

Elder Oaks, Elder Hallstrom, and Elder Perkins traveled from Hong Kong to Hyderabad, India, for a historic weekend. On Friday they met with nearly 600 young single adults from India, Sri Lanka, and Nepal. On Saturday the final Hyderabad India District conference saw more than 250 leaders attend the priesthood leadership meeting and almost 500 members attend the evening session. Finally, with more than 1,500 members in attendance in a convention center in Hyderabad on Sunday, Elder Oaks presided over the creation of India’s first stake.