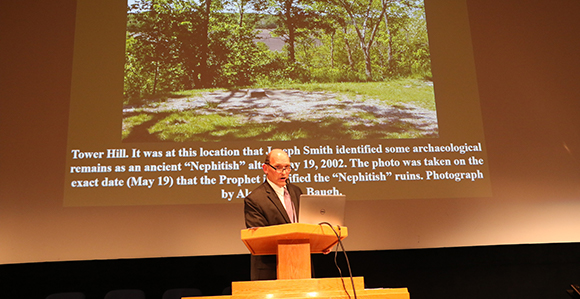 Alexander L. Baugh, chairman of the department of Church History and Doctrine at Brigham Young University, focused his Sperry Symposium address October 28 on the history and doctrine of the Adam-ondi-Ahman revelation.

Latter-day Saints are unique in their beliefs and view regarding Adam and Eve, including knowledge about Adam-ondi-Ahman, the place where Adam and Eve dwelt after their expulsion from the Garden of Eden.

Alexander L. Baugh, chairman of the department of Church History and Doctrine at Brigham Young University, focused his Sperry Symposium address October 28 on the history and doctrine of the Adam-ondi-Ahman revelation (D&C 116).

“In at least three instances the prophet received revelatory explanations or information regarding Adam-ondi-Ahman,” he said.

“The first of these occurred in early 1835 when he learned about the great council meeting held at Adam-ondi-Ahman three years previous to Adam’s death, in which the premortal Jehovah appeared to Adam and his righteous posterity.

“The second instance occurred in September 1835 when Oliver Cowdery was copying into the patriarchal blessing book the patriarchal blessing given to Joseph Smith Sr. At that time the Prophet authorized the inclusion of a passage into his father’s blessing that indicated Adam was the Ancient of Days spoken of in the book of Daniel in the Old Testament who would appear in the last days to his posterity along with Jesus Christ.

“The third revelatory occasion came on May 19, 1838, when it was revealed to Joseph Smith that the area known as Spring Hill in Daviess County, Missouri, was the ancient location of Adam-ondi-Ahman and the place where Daniel’s prophecy will take place.”

In his role as editor of the 1835 edition of the Doctrine and Covenants, W. W. Phelps revised earlier revelatory texts to reflect the added understanding Joseph Smith had received by 1835 about Adam-ondi-Ahman and revised the spelling, Brother Baugh said.

In addition, Brother Phelps’s poem “Adam-ondi-Ahman” became a favorite hymn sung by early Church members and has remained a favorite among LDS congregations to this day, he said.

“The singing of this hymn helped impress upon the hearts and minds of Latter-day Saints both past and present the significance of Adam’s homeland,” Brother Baugh said.

“Orson Pratt’s inspired decision to include the Prophet’s relatively short but significant entry as a separate section in the 1876 edition of the Doctrine and Covenants elevated the passage to scripture, he said. “This addition provided a greater sense of spiritual meaning to both location and prophetic events Latter-day Saints believe will transpire there before the Second Coming of Christ.” 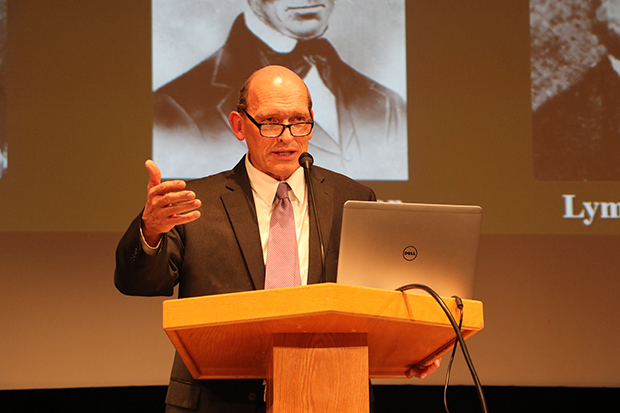 Alexander L. Baugh, chairman of the department of Church History and Doctrine at Brigham Young University, focused his Sperry Symposium address October 28 on the history and doctrine of the Adam-ondi-Ahman revelation. Photo by R. Scott Lloyd.