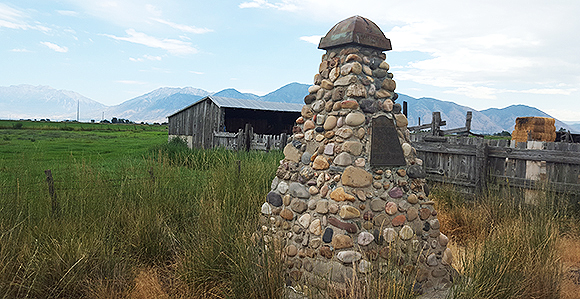 The Fort Palmyra monument near Spanish Fork was recently donated back to Daughters of Utah Pioneers, the original owners. Photo by Gary Boatright, Jr.

The monument, made of rocks and concrete, is near Spanish Fork and commemorates “Old Palmyra,” a fort built by Latter-day Saint settlers for protection in the early 1850s. The forerunner organizations of the DUP, SUP, and the local stake Mutual Improvement Association erected the marker in 1933 on the southwest corner of where the fort once stood, according to the monument’s plaque.

At some point the monument and the small parcel (60 by 80 feet) on which it stands was donated to the Church. In the decades that followed, it was not regularly maintained, said Gary Boatright, the historic sites operations manager with the Church History Department.

In 2017, Darla Butler, president of the Utah South Center company of the DUP, visited the monument while reviewing all the markers in her area. She found a few spent .22 shell casings on the ground from people taking target practice, but the historic marker was in fair condition otherwise, said Katherine Brimhall, second vice president of the DUP over markers.

Butler and others in the local DUP group expressed interest in cleaning up around the monument and adding more information about the fort’s history, but first they needed permission because the marker and property belonged to the Church, Brimhall said.

Butler submitted her request to Boatright.

This request initiated an extensive multi-year process involving research, meetings, and approvals. Ultimately, the process ended with the Church donating the monument and property to the DUP in January, Boatright said.

The DUP and the SUP are great when it comes to celebrating and commemorating local history. Collaboration with these organizations has been a “win-win,” Boatright said.

“They do great things. They have stepped up and preserved many things over the years that would have been lost if they wouldn’t have been there,” Boatright said. “In this specific case, taking care of this monument, they can do that better than us.”

The DUP is grateful to have stewardship of the monument once again, Brimhall said.

“It was a long process, but we’re delighted to have it,” Brimhall said.

“Fort Palmyra’s first marker was made the year before, so it doesn’t have an official DUP marker on it. We are placing an additional marker with more information and to honor all the pioneers that settled this area and for all the sacrifices they made to make it a great place for us to live,” Butler wrote in an email to the Deseret News. “We, as Spanish Fork’s Utah South Center Company, Daughters of Utah Pioneers, are proud to get Fort Palmyra an official Daughters of Utah Pioneers marker.”

The DUP plans to add a second marker to the Fort Palmyra pioneer settlement site in the near future that reads:

“Elder George A. Smith called several strong families to travel south of Salt Lake City to settle Palmyra. He counseled them to build a fort for protection to ensure their safety from the local Indians. These stalwart pioneers enclosed a 10-acre square with 10-foot walls. The task of cutting mud blocks, making adobe bricks and building the fort was great. Each family had a small house made with the bricks, which formed the outer walls of the fort; the doors faced the center. Inside, the corral stockade kept the livestock safe. Some families moved into the fort upon completion in 1852. Other families arrived after the Walker War broke out, one year later. The meetinghouse was used for church and school. During the winter of 1853–1854, having been joined by settlers from the Upper Settlement (now known as Spanish Fork), the population at Fort Palmyra numbered 404.

“A peaceful resolution brought the Walker War to a close in August 1854. Brigham Young counseled the pioneers to move to the Upper Settlement, where there was better farmland. Fort Palmyra was dismantled and the adobe bricks were taken with them to rebuild the buildings they would need to survive. These brave, stalwart pioneer men, women, and children built, then totally dismantled their homes and fort in the space of three years and rebuilt new homes in the second settlement.

“In January 1855, the Territorial Legislature granted Fort Palmyra/Fort St. Luke, a city charter, allowing the government to rename the city ‘Spanish Fork.’ In 1880, many settlers moved back to Palmyra and built a new meetinghouse that served as a church and school.”