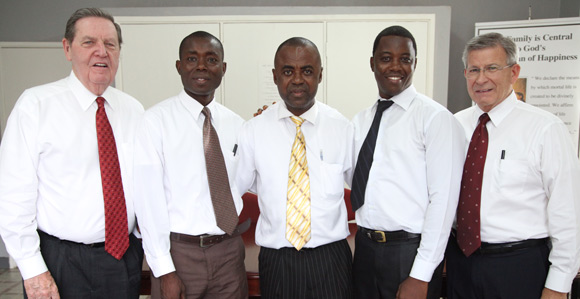 “In this latter-day light everything is seen more clearly, more hopefully, and more beautifully.” —Elder Jeffrey R. Holland, Quorum of the Twelve Apostles

A historic milestone was reached today (Sunday, December 2, 2012) with the creation of the 3,000th stake of The Church of Jesus Christ of Latter-day Saints.

Elder Jeffrey R. Holland of the Quorum of the Twelve Apostles organized the Freetown Sierra Leone Stake, the first stake in this nation in western Africa.

“It is part of the latter-day miracle, evidence of our 'marvelous work and a wonder' that the Church has grown to the point where its 3,000th stake is in far-off Sierra Leone,” Elder Holland said.

“What is particularly poignant for me is not only that this historic stake is created in a distant land for a people who have only relatively recently had the gospel brought to them but it is also created in a war-torn and tragic land where there has been so much bloodshed, so much violence and vice in an earlier time,” he continued.

Elder Holland said the creation of the Freetown Sierra Leone Stake signifies the impressive way in which the gospel of Jesus Christ is spreading worldwide, “particularly to a place where it is so dearly needed, where they have so little, and have had so much of tragedy. It’s a wonderful statement about what the gospel does in a wounded world, why we take the Church to all people, what it means to them to find it,  embrace it, and see it change their lives.”

He said it is remarkable that a stake—regardless of its status as the 3,000th worldwide—has been created in Sierra Leone. “The Church is relatively new in this country,” he noted.

Finding Root: How the Gospel Came to Sierra Leone

The Church’s official beginnings in Sierra Leone trace back to 1988, with the formation of the Wellington Freetown Branch. However, its roots in Sierra Leone reach back further. Several people played key roles in bringing the gospel’s message to the country, among whom were Michael Sumalia Samura, Bai Sama Sankoh, Christian L. George, Elizabeth Bangura, and Monica Orleans.

A Sierra Leonean, Brother Samura was living in the Netherlands when he learned of the Church and was baptized in 1981. He returned to Sierra Leone a few months later and found that the Church was not in his home country. “I decided … I better start doing something about it,” he said in a recording made by Sister Jill Johnson, who served as a missionary in the Africa West Area from 2010–2011.

He maintained contact with missionaries serving in the ward he had attended in the Netherlands and wrote letters to Church headquarters asking for the Church to be established in Sierra Leone. He was referred to the International Mission; its presidency—Elder Carlos E. Asay, Elder Jacob de Jager, and Elder William R. Bradford of the Seventy—sent a newsletter each month as a guide to what topics to discuss with the group he had established in Wellington. Brother Samura spoke with and taught “a lot of people who would come to know about the truthfulness of the gospel.”

Brother Sankoh, who was baptized in 1986 in Spain, also returned home eager to have the Church in Sierra Leone. “I was going out, preaching the word of God, telling people about the Church,” he told Sister Johnson.

In 1987, Moses Will was a member of a Protestant church in Goderich. After some controversy, 42 members of that church broke away and held their own worship services. During that time, Elizabeth Bangura and Monica Orleans, who had been baptized in Ghana, settled in Sierra Leone and told him and his group about the Church. Sister Bangura gave him a copy of the Book of Mormon, “Gospel Principles,” and other LDS literature “so we could get first-hand information.”

“Sister Bangura said, ‘I am a member of this church, but [it] is not here,’” Brother Will recalled. “I said, ‘Let’s see what we can do about it.’ We decided to contact the authorities in Salt Lake City. … We wrote our first letter in June 1987. … We wrote a second letter (on Jan. 17, 1988), and had a reply sent to us that we should seek out … Christian George, who had been baptized in Germany. [After] about a month, we found him. … We had already gathered ourselves … at Sister Bangura’s house [in Freetown]. Every Sunday … Christian George [would] come and teach us the discussions and also the Book of Mormon and some of the songs.”

Brother Samura, Brother Sankoh, and Brother Will were unaware of what each was doing to get the Church established in Sierra Leone. Brother Sankoh said the first reply to the letter he wrote was, “‘Wait, the Church will come to Sierra Leone, but we don’t know yet when.’ After some time, I received a letter from Utah telling me they are prepared to establish the Church in Sierra Leone. I was so happy that for the rest of the day I could not eat anything. [I was] just singing. My parents met me in my room, dancing alone. … I said, ‘My dreams have come true.’”

The Church is Established

As President and Sister Palmer decided to take a walk downtown, they prayed that someone would recognize them as missionaries. Their prayer was answered: Sister Orleans saw them, introduced herself, and took them to Brother George at his office.

The missionaries started teaching Brother George and the Goderich group and others. A group was established at Lower Pipe Line, Goderich, in West End Freetown. The first converts, 14 in number, were baptized on June 11, 1988, at Atlantic Beach, Lumley.

While the Church was becoming established in Freetown and its nearby areas, it began to take root in Bo, about four hours east of Freetown. Mohamud and Abibatu Turay, who were baptized December 17, 1988, in Liberia, fled that war-torn country and settled in Bo in 1989. By that time, Sierra Leone had become part of the Ghana Accra Mission, presided over by Miles H. Cunningham, who counseled Brother Turay to remain in Bo and help establish the Church there.

“We started the Church [in Bo] with my wife and three children,” he said. “We started talking to other people. … [The mission] gave us four missionaries. … The first baptism we had, [there were] 34 people baptized in the River Sewa. … It was a wonderful and marvelous thing, seeing the people joining the Church.”

Dedicated Land: A Blessing of Peace for a Time of War

Elder Richard G. Scott of the Quorum of the Twelve Apostles, traveling with his wife, Jeanene, visited Sierra Leone and dedicated the land at Leicester Peak on May 18, 1989.

Samuel A. Browne described how a small group of members gathered and listened as Elder Scott blessed the land that it would be opened to missionary work, that the Church would expand, “and that our children and children’s children will learn the gospel. … That particular day, when we had an Apostle here for the first time, I was so happy … it was a great day for us in Sierra Leone. It was a wonderful moment for us because every one of us present … felt the Spirit.”

Another member with a similar name, Samuel O. Brown, was present when Elder Scott offered the prayer upon the land. “We had an Apostle here for the first time,” he said. “I was so happy because it was a great day for us in Sierra Leone.”

The Church has been a blessing and source of peace for members in Sierra Leone; many endured extreme hardships as a 10-year civil war swept their land, beginning in 1991. The Church provided much humanitarian relief to Latter-day Saints and others during the turmoil.

The blessings pronounced by Elder Scott have been, and continue to be, fulfilled. The new stake, which has a membership of about 2,250, is made up of eight wards: Belliar Park, Congo Cross, Dwarzak, Freetown, Goderich, Hill Station, Lumley and Mount Aureol. Bo is a member district with about 3,000 members.

A New Day in Sierra Leone: The Church Today

At the time of the creation of the stake, there were four districts in Sierra Leone: Freetown, Freetown East, Bo, and Kenema, the latter of which was formed on November 25 as a division from the Bo District. (Bo remains a separate district in which reside some 3,000 Latter-day Saints who look forward to the day when Bo will become its own stake.)

Elder John B. Dickson of the Seventy and president of the Africa West Area, described the members in Sierra Leone as “a very faithful, friendly people that have great capacity. They love the Lord and have no trouble expressing their belief in God, no matter what their religious affiliation might be. The Church is growing very rapidly, but carefully, under the direction of Sierra Leone Freetown Mission President Richard P. Roggia.”

He said when the members learned the first stake was to be created in Sierra Leone, they were “very excited and many were moved to tears.”

Elder Dickson added, “This has been much more than just having sufficient numbers to have a stake. They have worked very hard to be a consecrated, covenant-keeping people.

“I am reminded of Elder Holland’s visit to Freetown last February when he was in a media event with a dozen or so newspaper and TV reporters. The first comment by a reporter was that they were very grateful that an Apostle of the Lord would visit and bless their country. We are all pleased that he has returned to create the first stake in Sierra Leone and the 3,000th in the Church.”

Elder Holland said, “As with everything in the gospel, there are blessings layered on top of blessings in such a day as this. It is wonderful for the institutional Church that we are spreading to ever-more distant frontiers. But it is also wonderful for individual people in those individual countries where the restored gospel of Jesus Christ is being so cherished and so revered. In this latter-day light everything is seen more clearly, more hopefully, and more beautifully.”