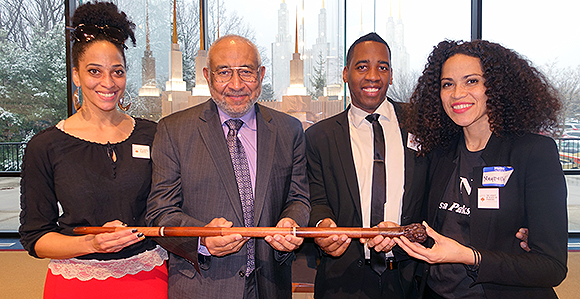 Darius Gray, second from left, receives the symbolic gift of a shepherd’s walking stick, from (from left) LaShawn Williams, Marcus McCoy, and Maybelline McCoy during a conference titled “The Legacy of Black LDS Pioneers” held at the Washington D.C. Temple Visitors’ Center on February 17 and 18.

“I learned things here I wish I had known 33 years ago when I joined the LDS Church. They wouldn’t have changed my decision to be baptized—because the gospel is true—but they would have helped me.”

Gloria Smith’s comments echoed the sentiments of many who attended a historic two-day conference titled “The Legacy of Black LDS Pioneers” at the Washington D.C. Temple Visitors’ Center on February 17 and 18. As a black Latter-day Saint in the McLean 2nd Ward of the McLean Virginia Stake, Smith felt the day helped her realize she is not alone, she has a voice, and she has the opportunity to help correct misunderstandings about the place of black members in Church history and doctrine.

Nearly 800 Church members and friends from many parts of the U.S. attended the conference that offered educational, emotional, and spiritual support for everyone, but especially black members in the LDS community. On Saturday, it featured speakers and discussion groups on black history and contemporary black issues. Some in the group also attended a temple session. Many participants attended Church services on Sunday in either the Anacostia Ward, Suitland Maryland Stake, or the Washington D.C. 3rd Ward, Washington D.C. Stake, and they later gathered for a “Why I Believe” devotional at the visitors’ center.

The impetus for the event was this year’s 40th anniversary of the revelation on the priesthood in June 1978, which allowed all worthy black male Church members’ priesthood ordination. Conference participants frequently referred to the Church’s 2013 essay on “Race and the Priesthood,” which reiterates that the Church is for everyone and “all are like unto God” (2 Nephi 26:33).

The event was also an opportunity to honor Darius Gray, one of the founding members of the Genesis Group, a support group for black members of the Church. Organizers presented him with a walking stick topped with a lion’s head to symbolize Gray’s spiritual strength and leadership as he helped shepherd growing flocks of black Latter-day Saints. Apostles Gordon B. Hinckley, Thomas S. Monson, and Boyd K. Packer had set him apart for this calling in 1971.

Conference planners set a tone of welcome and reunion by creating sessions that allowed for honest interaction, from query to testimony. Participants expressed both joy and pain, describing their struggles as black Church members and missionaries. At the opening, organizer Maybelline McCoy encouraged the audience to “join us with the truths that are uniquely yours.” It was an appeal for everyone to use their talents, culture, and background to build up the Lord’s kingdom, just as President Gordon B. Hinckley appealed to investigators and converts to bring “all the good that you have.”

LaShawn Williams encouraged black Church members to keep the dialogue going, seek out support, and recognize that everyone is “here to learn,” which sometimes means making mistakes and trying again.

Keynote speaker Marvin Perkins examined “Blacks in the Scriptures” and emphasized that understanding the scriptures requires understanding the idioms and phraseology of the times in which they were written. Doing so will lead to better success in preaching the gospel, he said, especially to those of other cultures. In addition, he advocated teaching by using all the scriptures because they validate and help explain each other.

In an auditorium session on “The Spirit of Elijah,” Eunicia Jones, James Jones, and Morgan Jones discussed black LDS missionaries and black members in Church history. In a nearby room, Phylicia Jimenez gave a humorous but poignant account of her conversion and struggle to stay strong and faithful.

Panelists Janan Graham-Russell and Bryndis Roberts hosted a session titled “Is There No Blessing for Me?” which examined the lives of black LDS women, the priesthood, and the temple. She recounted the story of Jane Manning James, an early black Church member who made repeated efforts to receive her endowment.

Roberts cautioned that no matter a person’s circumstances, and despite hardships, hurts, and frustrations, “you have to build your own testimony. … God always puts a ram in the bush.” Many in the session concurred, adding that people should help lift others—not see themselves as the victim, but as the ram.

Fred Bowers, Maybelline McCoy, and Marcus McCoy discussed the various intersections of black Latter-day Saint identities and the ways each person can build upon another’s strength.

The audience was then asked to “find your voice” by posting comments on posters around the room.

In the afternoon, Kevin Mosley presented a historical overview of those who helped lead the struggle for racial equality in the U.S.

At the closing, participants gathered to sing James Johnson’s “The Black National Anthem.” Written as a poem of remembrance and hope in 1900, it includes the lines “God of our weary years, God of our silent tears.”

Speakers at the Sunday fireside were Janan Graham-Russell and Dr. LaShawn Williams.

The conference was sponsored by the Washington D.C. Temple Visitors’ Center and the Cultural Arts Committee under the direction of the visitors’ center’s director, Elder Mark Ferrin, and his wife, Sister Cheryl Ferrin. It was partially funded by a grant from Utah Valley University.

“It was such a happy, inclusive event,” said Sister Ferrin. “We were so pleased to be able to provide a venue and to share together such a great spirit and sense of family.” 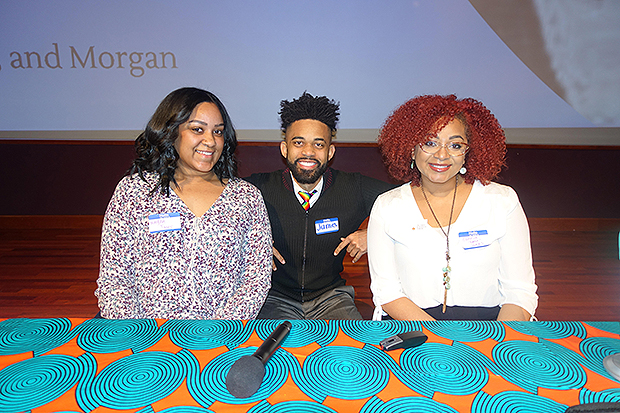 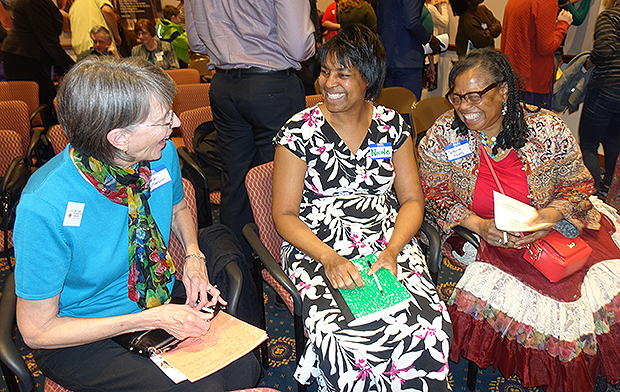 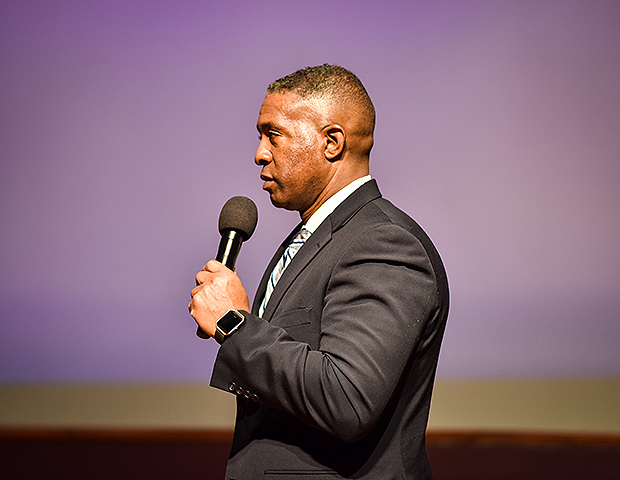 Marvin Perkins leads the session on blacks in the scriptures. Photo by Donna Moncur. 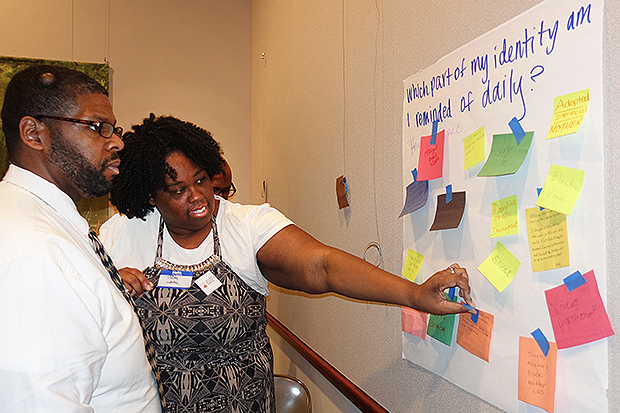 Kevin Mosely gives a historical perspective on the struggle for racial equality in the U.S. Photo by Page Johnson.