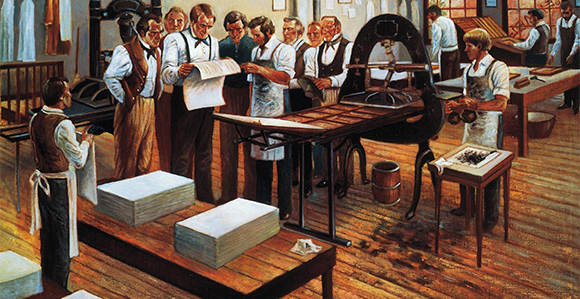 A painting by Gary E. Smith, Printing of the First Book of Mormon, depicts the work done in E. B. Grandin’s print shop in 1830.

The printer’s manuscript is the oldest intact document containing the Book of Mormon text. It was copied from the original manuscript, the one that scribes wrote from dictation given by the Prophet Joseph Smith as he translated the Nephite record by the gift and power of God.

“Joseph Smith placed that manuscript in the cornerstone of the Nauvoo House, the hotel they were building in Nauvoo in 1841, and it lay there for 41 years,” said Brother Skousen, who has been the editor of the Book of Mormon Critical Texts Project since 1988 and has published many books on the Book of Mormon in connection with that project.

“The seal on the cornerstone broke, water got in, mold ate away at it.”

When it was removed, most of it had disintegrated. Only about 28 percent was salvageable.

“The Church has 25 of that 28 percent,” Brother Skousen said. “The Wilford Wood family in Bountiful, Utah, has about 2 percent, and other individuals and the University of Utah have the rest of it.”

Early on in the translation process, Joseph had learned the necessity of having a backup copy. This came through sad experience, the loss of 116 pages of dictated manuscript lent to Martin Harris to show his wife and others.

Thus, the printer’s manuscript was copied from the original.

“Why is the printer’s manuscript important if it’s just a copy?” Brother Skousen asked. “Well, first of all, it’s not just any old copy. It’s really the only single complete copy of the original manuscript, and because we only have 28 percent of the original, for 72 percent of the Book of Mormon, this is the earliest form of the text.”

As the main scribe, Oliver Cowdery began preparing the printer’s manuscript in August 1829, and it was completed in January 1830. The manuscript was provided portions at a time to the typesetter, John Gilbert, working at E. B. Grandin’s print shop.

“There are two kinds of corrections on the manuscript done by other people,” Brother Skousen noted. “One is the typesetter. The original manuscript and the printer’s, for the most part, didn’t have punctuation, didn’t have capitalization at the beginning of sentences. … In our current LDS text, the punctuation we have is essentially the typesetter’s, John Gilbert’s.”

About two-thirds of the time, Gilbert made the punctuation at the same time as he was setting the type, “which is quite incredible; it’s quite a feat. John Gilbert was always proud throughout his life of the work he and others in the shop had done, and this was quite an accomplishment to be able to set type on the run, so to speak.”

Using projected images of the printer’s manuscript, Brother Skousen showed that at the beginning of the book of Mosiah, Oliver Cowdery had identified it as chapter 3 and then changed it to chapter 1. Brother Skousen theorized that chapter 1 and most of chapter 2 had already been translated and dictated by the Prophet but that they were part of the 116 pages of manuscript that were lost after being lent to Martin Harris.

Unlike most of the other books in the Book of Mormon, the book of Mosiah lacks a summary in the beginning and seems to start “in the middle of things,” Brother Skousen observed. “All indications are that when they lost the 116 pages, they lost the book of Lehi and part of Mosiah.”

Lack of proofreading marks on a portion of the printer’s manuscript, and a stain from the yarn used to bind it, indicate that portion was never submitted to the typesetter, Brother Skousen pointed out. The type for that portion must have been set from the original, dictated manuscript.

“Why did they do this?” Brother Skousen asked. “I thought for about 20 years that it was because they got behind in their copy work, so that’s what I had proposed. But several years ago, an article was written suggesting—and I think this is correct—that Joseph Smith became concerned that someone could print the Book of Mormon without copyright protection in Canada, in the British realm, because the U.S. copyright had no efficacy in Canada.”

This was probably triggered by an incident in which Abner Cole, working on Sundays in the Grandin print shop to publish his own newspaper, published pirated portions of the Book of Mormon from sheets that were in the print shop. Brother Skousen believes that, when stopped in his nefarious action, Cole threatened to publish the stolen Book of Mormon portions in Canada.

“We know that Oliver Cowdery, Hyrum Page, and two other brethren went to Canada in the middle of winter. … They tried to get a publisher, a printer, but they didn’t succeed,” Brother Skousen said. “But during that time period, they took the original to the typesetter. He never knew there were two manuscripts. He set the type from the original and marked it up, just like it was the regular one.”

“We have to be grateful for the cooperation that has developed between our two churches—and other individuals who aren’t Latter-day Saints or members of the Community of Christ,” he said, adding that the Book of Mormon is a scripture for the whole world, and those who work on preserving and publishing the printer’s manuscript are thus doing a work for the whole world.

In his presentation, Brother Jensen recounted incidents pertaining to the coming forth of the Book of Mormon.

“When all is said and done, Joseph Smith’s earliest supporters were his family,” he said, “and when we think about Joseph Smith and the many trials and tribulations that he went through, I think we need to remember that one of his most important support groups was the family that surrounded him.”

The Prophet’s mother, Lucy Mack Smith, wrote of her son Alvin, as he was on his deathbed, calling the family together and instructing young Joseph to keep God’s commandments and do everything he could to obtain the Nephite record, Brother Jensen recounted.

“Joseph Smith was not a solitary prophet,” he said. “He had individuals who supported him, and his family, I believe, was a tremendous support.”

Brother Jensen spoke of Joseph’s heavy reliance on his wife, Emma, who not only kept house and cooked for Joseph and the scribes during the translation process but also served as a scribe herself.

Joseph and Emma suffered the stillborn death of a child at about the time they went through the trauma of the loss of the 116 pages of manuscript.

“We don’t know their reaction, because no one left a [written] memory,” he said. “But as a historian, I can imagine the pain and suffering they must have felt.”

For David Whitmer, one of the official Three Witnesses to the Book of Mormon, the book was not only a religious artifact, it was a family artifact, Brother Jensen said. When showing the printer’s manuscript, he would point to the yarn that bound it together and say, “That was my mother’s yarn,” Brother Jensen said.

He added, “The Whitmer family spent generations preserving the record, preserving the Book of Mormon. When I see this small piece of yarn I see the Restoration, because what is the Restoration? It is a miracle or two with a lot of drudgery added to it. When Joseph Smith was called to build up Zion, he had the help of angels, but he also had the help of farm wives who were willing to give their time and efforts to the preservation of the record.”

Historians have been unable to identify one of the scribes of the printer’s manuscript. To Brother Jensen, that unknown scribe “is representative of the individuals who surrounded Joseph Smith to bring forth the Book of Mormon.”

The printer’s manuscript of the Book of Mormon rests on a table in this early 20th-century photograph. The book was published in 1830 in E. B. Grandin’s print shop in Palmyra, New York. Photo courtesy of Community of Christ Library Archives.