Helping the St. George Tabernacle to Withstand the Test of Time

Started in 1861 and dedicated in 1876, the St. George Tabernacle awaits a July 28 rededication following a two-year closure. Projects included seismic reinforcements and a return to much of the tabernacle’s original exterior and interior appearances.

“It still feels old. … It has that old pioneer spirit while being touched up, refreshed, and cleaned.” —Emily Utt, Church History Department historical sites curator

As J. Ralph Atkin stands inside the St. George Tabernacle, memories start flooding back—attending Church and Primary meetings as a child in the old brick building in the 1940s and 1950s, sliding on knees or backside on the meeting hall’s smooth wood-plank floor, enduring southern Utah’s stifling heat indoors well before the advent of air conditioning, and hearing stories of his great-great-grandfather William Fawcett working as a stone mason on the construction of the tabernacle.

Oh, and there’s that eye, situated high on the wall facing the congregational seating.

“As a kid attending church here, you felt the presence of that all-seeing eye,” said Atkin.

The floors, the stonework, the eye, and everything else has been renovated, reworked, or refreshed as the St. George Tabernacle emerges from a two-year closure for its rededication Saturday, July 28.

Presiding at the 10 a.m. session will be Elder Jeffrey R. Holland of the Quorum of the Twelve Apostles, a St. George native who, like Atkin, grew up attending meetings, activities, and events in the historic building.

An open house currently runs through Thursday, July 26, with Atkin helping lead the public affairs efforts for the open house and rededication. A Church history website features the building’s history and renovations through the years.

Much of the recent restoration project dealt with seismic reinforcement, strengthening and stabilizing the tabernacle. Efforts included exterior projects such as new mortar, a return to the historic colors for the brickwork as well as doors and trim, a repair of the historic tower clock, and a restoration of the 1870s bell.

Interior colors were matched to the original tints as determined by extensive lab analysis of the many layers of paint applied to the walls over nearly a century and a half. Fabrics for carpets and pew covers were matched to vintage patterns and colors, and the sometimes-swaying balconies were stabilized.

“It still feels old,” said Emily Utt, historical sites curator with the Church History Department, who has worked on the project for four years. “I love coming in here and seeing that the wood isn’t perfect, that the floors are still a little creaky. It has that old pioneer spirit while being touched up, refreshed, and cleaned.”

In October 1861, 309 families were called to settle southern Utah—the settlement then named St. George—and raise cotton and warm-weather crops such as grapes and figs. Atkin’s Great-Great-Grandfather Fawcett—the Church’s first convert in York, England, who later emigrated to the United States and worked on the Nauvoo Temple—was on the first wagon entering the southern Utah valley after the 30-day trip from Salt Lake City.

Within the first year, as settling families continued to live in buckboard wagons and tents, plans were discussed to build a tabernacle on the city’s center block.

Eight years after the first cornerstone was laid, exterior work on the St. George Tabernacle was finished by the end of 1871, just shortly after the St. George Temple—located four blocks to the southeast—was announced. Many workers and craftsman—including Fawcett wielding his stone mason’s hammer—took their talents from tabernacle to temple, as the tabernacle’s interior work continued for several years. The tabernacle was dedicated in May 1876, the temple in April 1877.

Utt walks through the tabernacle and sees its evolution, starting with the 1863 foundation, the rough-hewn pine serving as attic trusses, and the window glass that survived a cross-country trek from New York, with 80 percent of the original window glass still intact.

Chandeliers were added in the early 1880s (the current pieces are electric replicas of the original oil-based light fixtures), modifications were made in the 1920s, electricity was a 20th-century supplement, a pipe organ was added and pews replaced in 1940, air conditioning later followed, and folding opera-style seats salvaged from the Salt Lake Temple replaced the wood-slat benches on the balconies more than a half-century ago.

Featured high above the pulpit, rostrum, and choir seats on the wall facing the congregation are several visual elements that Utt says symbolize the call of the St. George settlers to create and sustain a self-sufficient, Zion-like community.

Those symbols include an all-seeing eye to remind that God is mindful and watching over the Saints and a thrice-crowned crest containing the 1875 finish date, a finger pointing to heaven, a handclasp of brotherly love, and the phrase “Faith & Union.”

Grape clusters and cotton blossoms used in trim throughout are visual reminders of settlers’ agricultural assignment.

“This building has really been the cultural and community heart of this town since it was constructed,” Utt said, “and we hope that for the next 150 years that story continues.”

Visitors walk through the St. George Tabernacle during its open house on Monday, July 23, 2018. After being closed for two years for renovations, the tabernacle will be rededicated on July 28, 2018. Photo by Scott Taylor. 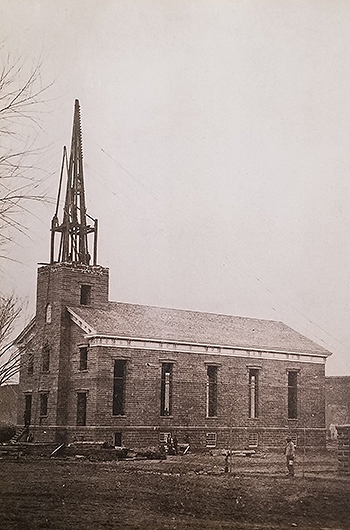 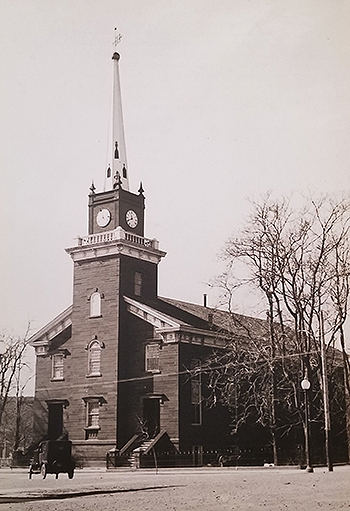