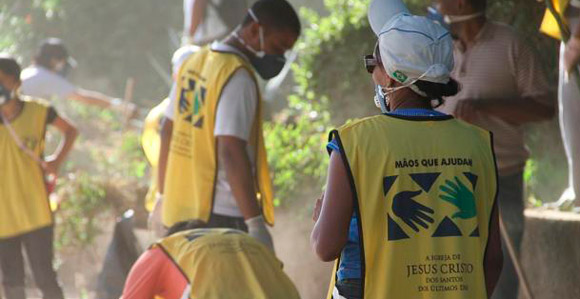 On July 30, 2011, yellow vests dominated the scene at hundreds of service projects across Brazil in celebration of the 12th anniversary of Mormon Helping Hands, a program of The Church of Jesus Christ of Latter-day Saints that seeks to provide community service and disaster relief to those in need.

Mormon Helping Hands actually originated in Brazil (“Maos aue Ajudam”) as a way to acquaint friends and neighbors with the Church’s humanitarian efforts. It has now become a major annual event.

This year’s day of service was filled with singing, laughing, and applause as 120,000 men, women, and children swept streets, cleaned schools, repaired buildings, beautified parks, and participated in other service projects in Latin America’s largest, most populated country. Church members partnered with community members to provide service that will benefit everyone.

Elsewhere, members delivered clowns made from recycled materials to be handed out to children in daycares, clinics, shelters, etc.

Over the two months prior to the service day, more than 500 volunteers worked to collect donated food, which was given to 175 needy families in Sao Jose on July 30.

“The techniques we learned will help us to keep food in our pantry, since much of our food spoils in the moist environment,” social worker Adriane J. Backes Ruoff said.

In February, more than 1,000 Latter-day Saints and friends of the Church took to the mountain region of Nova Friburgo, a municipality in the state of Rio de Janeiro, wielding brooms, shovels, and wheelbarrows to clean the city’s streets, hospitals, and schools, after a rash of devastating floods and landslides in January.

Through Mormon Helping Hands, Latter-day Saints have also pitched in at other times and in many areas of the world to clean and beautify communities. Thousands of volunteers have donated millions of hours of service.

Not only does Mormon Helping Hands help the needy and improve communities, the Helping Hands website reads, it can strengthen Church members, provide an opportunity to share the gospel indirectly, help develop relationships between Church leaders and government officials, and enhance the reputation of the Church.

Last year, more than 100,000 Latter-day Saint volunteers and friends of the Church gathered along the Copacabana Beach in southeast Brazil to help pick up and clean up.

In 2009, on the 10th anniversary of the program, Senator Alvaro Dias, a member of the Brazilian Federal Legislature, said of the service day, “A gesture is worth more than a thousand words. … This gesture has a lot of power to practice what you preach like the Church does here.”

Earlier this year, the First Presidency invited all Church units everywhere to commemorate the 75th anniversary of the Church welfare plan by organizing their own day of service.