The Forest Bend Ward celebrates following a successful ward temple day where all the ordinances performed that day were for the progenitors of ward members who had worked to prepare names.

“There was such a feeling of love and unity, it was like a slice of heaven.” —Mike Tea, Forest Bend Ward member in the Sandy Utah Cottonwood Creek Stake

On Family Tree, the Church’s online family history program, green arrows become the long sought-after prize at the end of the tunnel. A green arrow indicates an ancestor who’s in need of help has been found—and that help is on the way.

That’s why the Forest Bend Ward, Sandy Utah Cottonwood Creek Stake, decided to put together a ward activity called the Green Arrow Project. The goal of this project was to have a ward temple day during which all of the ordinances performed were for progenitors of ward members.

To make the Green Arrow Project happen, many members needed to learn how to do their genealogical work. Many of the youth had never done any genealogy before. Many of the more senior ward members had never done it online. The ward solved this problem by teaming the youth with their older counterparts so they could learn from each other.

The ward family history consultantand other adults who were already knowledgeable about online family history got together with the youth and taught them what they needed to know. The youth then went into the homes of the older ward members to teach them how to set up an account with ChurchofJesusChrist.org andFamilySearch. Once logged in, the seniors in the ward provided names and dates to identify the green arrows, indicating the temple work that had not been done among their ancestors.

“It was a steep learning curve for both youth and adults,” said Todd Gee, ward Young Men president.

“Teaching the families was a great way to get the youth and the adults in the ward to meet and get to know each other beyond just passing in the halls at church,” said 17-year-old Laurel class president Brinnlie Gatherum.

“I really liked going to their homes and working with them and hearing their stories about their ancestors,” said Libby Palmer, a 16-year-old Laurel from the ward.

Some of the youth said going into the homes of people they didn’t know and making friends with them felt like missionary work.

Mia Maid Emily Kazerian, 15, said she was struck by the trust the bishop placed in the youth.

“I was surprised that we could actually help,” she said. “It was a good feeling knowing that there was something we could offer.”

On November 1, 2012, the ward held its annual temple day at the Draper Utah Temple. The youth attended two separate baptism sessions and performed 150 baptisms in the first session alone. This was combined with a full day of temple work performed by the adults.

“It was an amazing day,” said Bishop Robert T. Smith. “The final endowment session was attended and officiated almost entirely by ward members who were performing ordinances for family names they had found with the help of the youth.”

“There was such a feeling of love and unity, it was like a slice of heaven,” said ward member Mike Tea, who officiated on one of the sessions.

To complete the work, ward member Elder Robert F. Orton, former member of the Second Quorum of the Seventy and a sealer in the Draper Utah Temple, performed the sealings by proxy of spouses and children for many of the names submitted by ward members that day. By the end of the day, hundreds of ordinances had been completed, all for progenitors of members of the Forest Bend Ward.

The following night, the ward held an activity called the Green Arrow Celebration. The youth shared their experiences and testimonies that had been strengthened through the Green Arrow Project, and the bishopric presented ward members with a large cake in the shape of a green arrow to commemorate the work that had been done.

All had learned much, grown closer together, and learned to love—as proclaimed by first assistant Zachary Kushlan—“those sweet green arrows.” 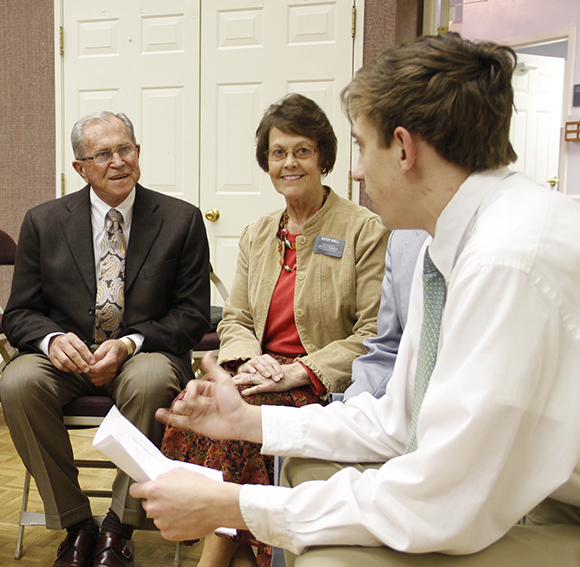