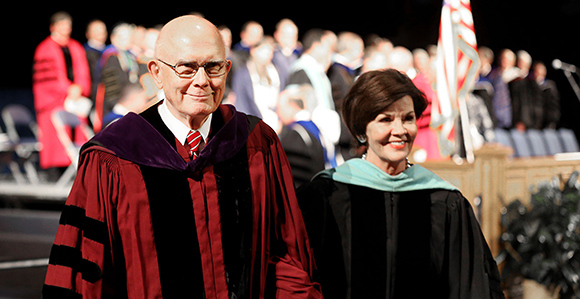 “I believe our greatest joy is found through the gospel of Jesus Christ, which explains our origin as spirits, the creation of the world, our purpose in mortality, and our destiny in eternity.” —Elder Dallin H. Oaks of the Quorum of the Twelve

“Focus on becoming the person the Lord needs you to be,” said President Russell M. Nelson, just weeks after being named the President of the Quorum of the Twelve Apostles, during commencement exercises at Brigham Young University on August 13.

Held in a newly renovated Marriott Center on the university’s campus, more than 2,000 graduates and their supporters gathered to celebrate the achievement of the combined 2015 spring and summer classes. Of the graduates, 1,645 earned a bachelor degree, 323 earned a master's degree, and 53 earned their doctorate degree.

Elder Dallin H. Oaks of the Quorum of the Twelve Apostles gave the keynote address, and BYU President Kevin J Worthen conducted and spoke at the event. Dr. Donald B. Doty, M.D., was awarded an honorary doctor of science and Christian service degree.

“These attributes are difficult to measure, but they constitute the substance of what the Lord hopes for each of you,” he said.

Reminding listeners of the question found in the scriptures, “What manner of men and women ought ye to be?” President Nelson responded with, “Even as I am.”

“Each day we become more like Him, regardless of our chosen field of occupational endeavor,” he said.

In the keynote address, Elder Oaks spoke of the eternal nature of joy.

Using the example of Lehi in the Book of Mormon when he taught that the children of God exist that they might have joy, Elder Oaks spoke of the great truth that is “fundamental to our philosophy of life.”

“The kind of joy referred to in the scriptures is not the happiness we experience in temporary rushes of pleasure such as we enjoy in today’s recognitions. The joy that is the purpose of our existence is intense and enduring. We may properly say it is eternal.”

In response to his question “Where do we find our greatest joy?” Elder Oaks said, “I suggest that it is in creativity—the process and feeling of creating something.”

Sharing how creativity can be found in many different professions and activities, Elder Oaks spoke of the process of cultivating and creating things—whether it is a life, a work of art, or a performance.

“Overarching all of these is the joy we experience in many forms of service to our fellowman,” he said. All of those illustrations are only mortal or temporary examples of the joy of creativity.

“We have no assurance that most of the things that bring us joy in mortality will continue in the next life,” he said. “The diploma you have received this day is but one example.”

“I believe our greatest joy is found through the gospel of Jesus Christ, which explains our origin as spirits, the creation of the world, our purpose in mortality, and our destiny in eternity,” he said.

Explanations of the plan of salvation—in addition to important doctrines of the gospel—are often described by the word “joy.”

“The gospel’s assurance of a continued, embodied existence after this life illuminates our understanding of the ultimate joy of creativity. … Surely our greatest eternal joy will be in the creativity that lives beyond this mortal life and gives joy after the Resurrection and throughout all eternity. …

“Treasure and enlarge your family connections,” he said. “Cherish and use your opportunities for creativity in eternal marriage. And value your friendships and opportunities for service, for those efforts can also be eternal.”

Drawing from the example of when a Samaritan woman met Jesus at the well, Elder Oaks encouraged listeners to draw from the “well of water springing up into everlasting life.”

“On this graduation day, it is appropriate to think of your education and your degree as implements that can draw water from a deep well,” he said. “You can use those implements to satisfy thirst and other earthly desires for yourself and those dependent upon you. On occasion, they can also be used to provide earthly support for the Savior and His work and His servants. But we must never forget what the Savior told the Samaritan woman: ‘Whosoever drinketh of this water shall thirst again.’ Only from Jesus Christ, the Lord and Savior of this world, can we obtain the living water whose partaker shall never thirst again, in whom it will be ‘a well of water springing up into everlasting life.’”

President Worthen reminded graduates to “do what you are.” 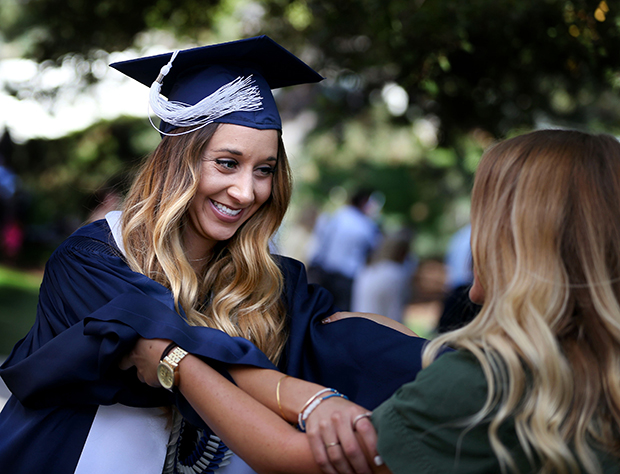 Paige Hollingsworth and her friend, Kathryn Christensen, chat after Hollingsworth's graduation from Brigham Young University in Provo on August 13, 2015. Hollingsworth received a bachelor of arts in dance. Photo by Laura Seitz, Deseret News.

“The world will often teach us that we are what we do,” he said. But rather than being defined by what they do, President Worthen encouraged graduates to “view our jobs—even their entire lives—as a calling and to choose our jobs and how we fulfill them by determining who we are.” 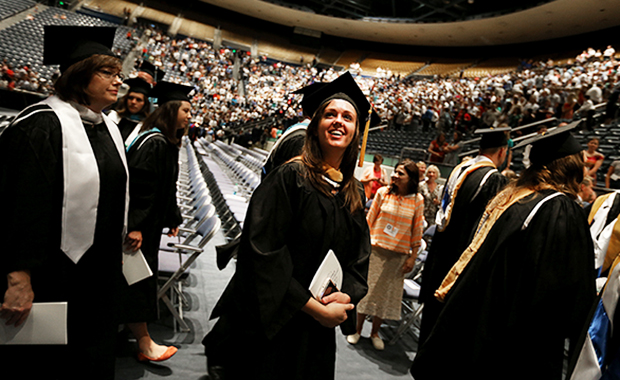 “I urge you to consider this concept as you move ahead with your lives because who you are is extraordinary—beloved sons or daughters of heavenly parents with a divine nature and destiny,” he said. “And as a result of who you are—and who you can become—you can have a profound impact on those around you, not only in your jobs but also in your communities and, most importantly, in your homes.” 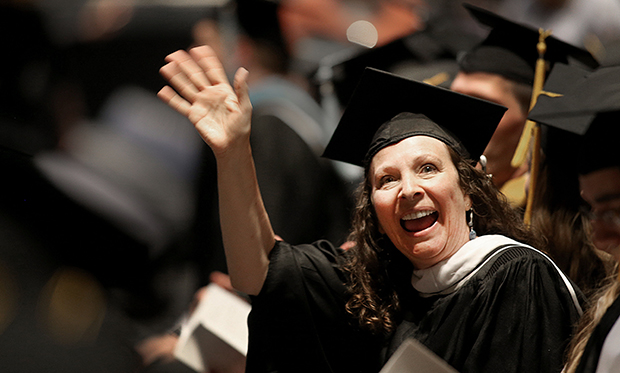 During his remarks, President Nelson spoke of Dr. Doty and his work, for which he earned a honorary degree.

“Doctor Doty is regarded throughout the globe as the premier teacher of cardiac surgery,” President Nelson said of Dr. Doty. “His textbooks are used by specialists throughout the world.” In addition to his academic scholarship, President Nelson spoke of the great missionary service Dr. Doty gave as he—for nine years—directed the medical needs of missionaries for the Church. 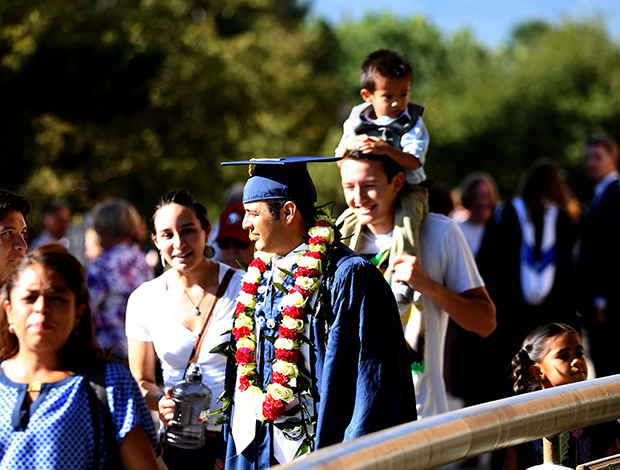 “No one could be more deserving,” President Nelson said. 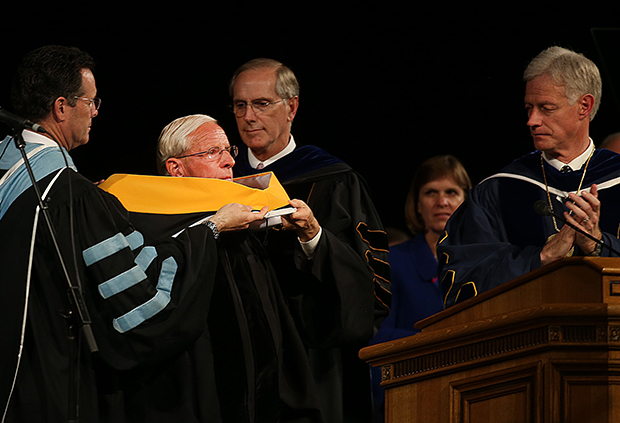