God Uses the Unlikely for the Impossible, Says Elder Nelson 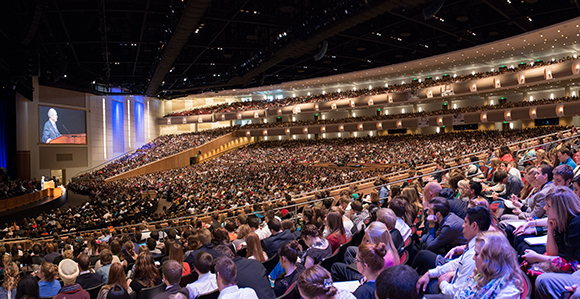 Students and faculty filled the BYU-Idaho Center to hear Elder Russell M. Nelson of the Quorum of the Twelve Apostles speak during a campus devotional on January 27.

“As you know and apply the teachings of the Lord in your lives and in your work, you can change the world. You will become a precious part of His perennial pattern: the Lord uses the unlikely to accomplish the impossible!” —Elder Russell M. Nelson of the Quorum of the Twelve

“The Lord uses the unlikely to accomplish the impossible,” Elder Russell M. Nelson of the Quorum of the Twelve Apostles told students at Brigham Young University–Idaho during a campus devotional on January 27.

Using examples from the scriptures and Church history, Elder Nelson spoke of the great work ordinary individuals have been asked to do that were possible with the Lord’s help.

Looking at Joseph Smith, a young, teachable, untitled youth, to restore the gospel of Jesus Christ to the earth; the story of David, who slew Goliath with a stone and sling; Moses, who was called to lead the children of Israel out of bondage in his advanced years; and other examples from the scriptures, Elder Nelson spoke of the pattern the Lord has used repeatedly throughout history.

“Here again we see the pattern: the Lord uses the unlikely to accomplish the impossible,” he said.

Sharing experiences from his own life, Elder Nelson spoke of when he and Elder Dallin H. Oaks, also of the Quorum of the Twelve Apostles, were called away from their professions of medicine and law to serve as Apostles in 1984.

Not long after he began his new role, Elder Nelson was assigned by Church President Ezra Taft Benson to supervise the work of the Lord in Europe and Africa. He was given a specific charge to open the nations of Eastern Europe—which was then under the yoke of communism.

“If ever a task seemed impossible to me, that was it,” Elder Nelson recalled. “In the ensuing years, I tried my best. In each atheistic nation, I was never wanted and never welcome. Their governmental leaders wouldn’t even give appointments to a foreigner who professed faith in God. In fact, at that time, some believers were imprisoned or even executed.”

Because those countries kept good records on visits by foreigners, Elder Nelson was on record as an American heart surgeon, who, as a volunteer, had previously taught in some of those countries. With him on this assignment was Elder Hans B. Ringger of the Seventy, who was a Swiss architect and engineer.

“Our partnership was totally disarming to them,” he said. “We were truly unlikely, and different from leaders of other faith groups.”

Together they traveled country by country, laboring diligently and doing the very best they could.

“And then the Lord made up the difference,” he said. “He did what we could not do.”

Before President Benson passed away, Elder Nelson was able to report that the Church had been established in all countries of Eastern Europe. [For more details, see this video.]

“I testify to you that the Lord meant what He said when He declared, ‘I will show unto the children of men that I am able to do mine own work,’” he said. “Yes, I am an eyewitness—I am a part of that pattern: the Lord used the unlikely to accomplish the impossible.”

Recognizing his audience is young and still learning, Elder Nelson reminded listeners that they are “literally and truly a son … or daughter of Almighty God” and are created in His image.

“Physically, He wants you to honor the body He has given you,” he said. “He wants you to treasure and care for your body as your own personal temple. Spiritually, He has sent you here to be successful and to have joy in your journey in mortality.”

Individuals are entitled through their worthiness to receive revelation to help them with their righteous endeavors.

“It matters not that times of tribulation will come,” he said. “Your prayerful access to help is just as real as it was when David battled his Goliath.”

Elder Nelson told listeners to foster their faith and to fix their focus with an eye single to the glory of God.

“The Lord has more in mind for you than you have in mind for yourself,” he said. “You have been reserved and preserved for this time and place. You can do hard things. At the same time, as you love Him and keep His commandments, great rewards—even unimaginable achievements—may be yours. …

“You faithful students here at BYU–Idaho can accomplish the impossible. You literally can help shape the destiny of the entire human family! You will be scattered like seeds in the wind to build up the Church in all parts of the world. As you know and apply the teachings of the Lord in your lives and in your work, you can change the world. You will become a precious part of His perennial pattern: the Lord uses the unlikely to accomplish the impossible!”

The Apostle’s words came on a historic day for the university with the announcement that Clark G. Gilbert, current CEO of Deseret News and Deseret Digital Media and an executive vice president of Deseret Management Corporation, would replace Kim B. Clark as BYU–Idaho’s president in April.

The BYU-Idaho Men's Choir sings during a campus devotional on January 27. Photo by Michael Lewis, BYU-Idaho. 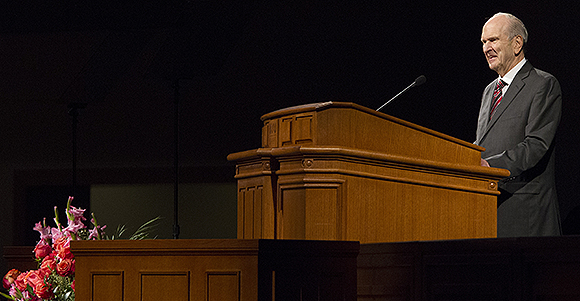 Elder Russell M. Nelson of the Quorum of the Twelve Apostles speaks to the faculty and students during the BYU-Idaho devotional held in the BYU–Idaho Center. Photo by Tyler Rickenbach, BYU-Idaho.