God Is the Supreme Scientist, Says Curator of BYU’s Museum of Paleontology 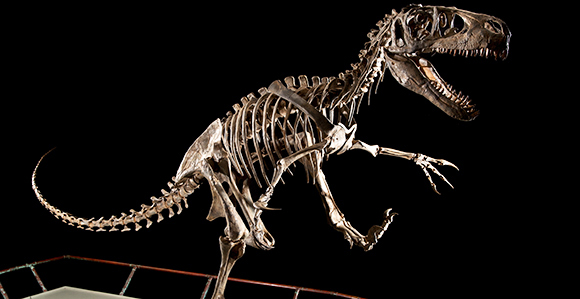 Rod Scheetz’s interest in the Church began when a renowned paleontologist told him, “We know why the earth was created; we just don’t know how.”

“[Curiosity and religious devotion] is the beauty of the Church. … The Church is looking for truth, and we don’t find truth only in the scriptures. There’s truth all around us; we just have to search for it.” —Rod Scheetz, curator of BYU’s Museum of Paleontology

Go ahead, ask Rod Scheetz about the “stalk-and-eviscerate” predatory methods of the Utahraptor or the nesting habits of a mama Philydrosaurus. Quiz him on the delicacies of harvesting Cretaceous-era dinosaur fossils buried deep in the clay of western Colorado.

But don’t bother asking him to name his favorite Jurassic Park film.

“Haven’t watched one of them,” said the curator of Brigham Young University’s Museum of Paleontology, smiling. “It’s really too bad, I guess.”

Call it the “paleontologist’s curse.” Scheetz can’t sit through a dino flick without twitching a bit. He’s simply incapable of tuning out his scientific sensibilities—even for an hour or two of Hollywood fun.

But at BYU, he feels no such friction between his vigorous scientific study and the school’s mission to assist individuals in their quest for perfection and eternal life. Operating a scientifically rigorous paleontological research facility and museum on a faith-based campus, he said, is a “natural fit.”

Curiosity and religious devotion can be shared attributes.

“That’s the beauty of the Church—it’s one of the reasons why I joined the Church,” he said. “The Church is looking for truth, and we don’t find truth only in the scriptures. There’s truth all around us; we just have to search for it.”

Scheetz was 12 years old and already a rock hound in the early 1970s when he reached out to the “father” of BYU’s paleontology program—James “Dinosaur Jim” Jensen. Young Rod had found what he believed were baby dinosaur bones near his home of Delta, Colorado. Impressed by the boy’s enthusiasm (and correct assessment), Dr. Jensen invited him to take part in a local fossil dig.

“He kept inviting [me], year after year, to work at the quarry—[I] loved it,” said Scheetz.

The budding paleontologist eventually learned Jensen worked for the Church-owned BYU. Most of his team were returned missionaries. So he posed a question to his mentor: Why is a Church-owned school digging for dinosaurs?

“It’s simple,” Jensen answered, “we know why the earth was created; we just don’t know how.”

Scheetz went back to work, returning soon with a follow-up: “So why was the earth created?”

“Well,” said Jensen, “you’ll have to talk to the missionaries about that.”

Soon Scheetz was learning about the plan of salvation and the Restoration even while working the dig site with the returned missionaries.

He eventually enrolled at BYU, joined the Church, and continued his paleontology studies under Jensen. Some on campus were suspicious of science, prompting debates over, say, creationism and evolution. But Scheetz never picked sides between his scientific learning and his burgeoning gospel testimony. No need, he said—the Creator is also the supreme Scientist.

“The earth is not some fly-by-night operation; it took billions of years to create. For me, that’s humbling. That’s awesome. To me, that means this world took a tremendous amount of preparation.

“How much more of a testimony builder is there than that?”

BYU’s ongoing support of paleontological study is evidenced by the sprawling repository/museum located across the street from Lavell Edwards Stadium. Housed at the facility are more than 17,000 specimens, including many that still bear the late Jensen’s fingerprints.

Have you heard the rumor that dinosaur bones rested below the football stadium? It’s true. Cached below the venue were dozens of large pallets laden with extracted bones until additional storage space was built near the museum about 10 years ago.

A popular (and free admission) destination for school groups, families, and Scout troops, the BYU Museum of Paleontology remains a dynamic research center. Both graduate and undergraduate students are establishing their dinosaur bona fides—building maps; analyzing, cleaning, and classifying bones; and editing manuscripts for publication.

Meanwhile, field work continues in fossil-rich quarries in eastern Utah and western Colorado. “We’re out every summer. … There are still a lot of dinosaurs to be found.”

Finding the next “Dinosaur Jim” or Rod Scheetz won’t be difficult. Kids filled the museum galleries on a recent weekday, bouncing from one exhibit to the next and impressing their parents with their dino savvy.

“We’re in town from Las Vegas, and this is where our children wanted to be,” said John Pagaduan. “They’re amazed by all the fossils and dinosaur skeletons.”

Scheetz admits he's sometimes on the business end of a dinosaur lecture. “I’ve seen 6-year-olds rattle off more names of dinosaurs than I know.” 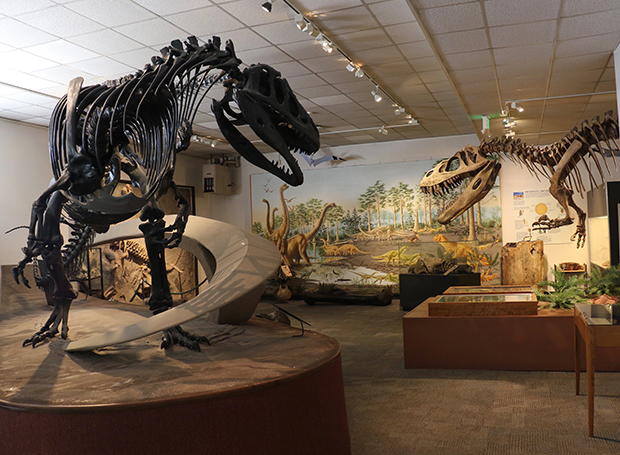 Galleries at BYU’s Museum of Paleontology include a veritable menagerie of reproductions of dinosaur skeletons. Photo by Jason Swensen. 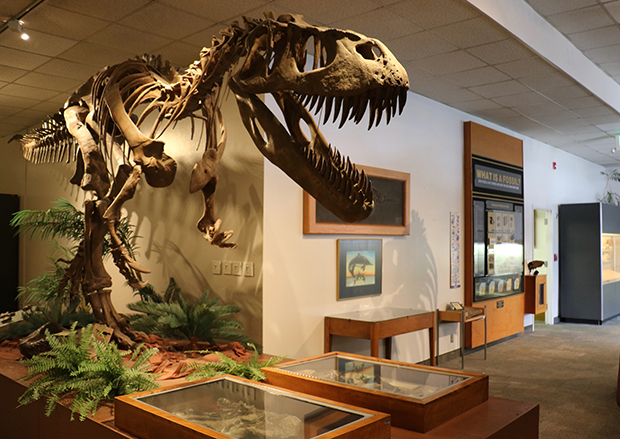 The fabricated skeleton of a “terrible lizard' is dramatically displayed at BYU’s Museum of Paleontology. Photo by Jason Swensen. 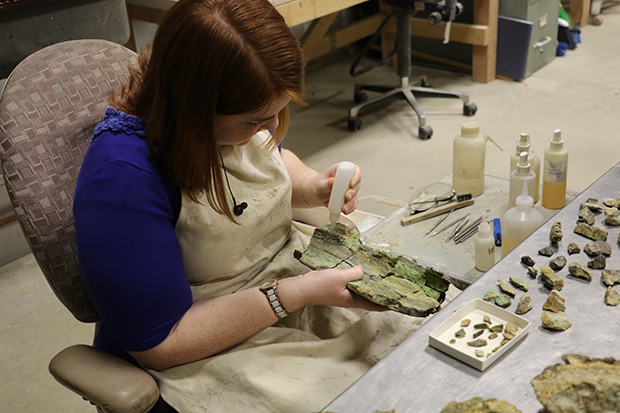 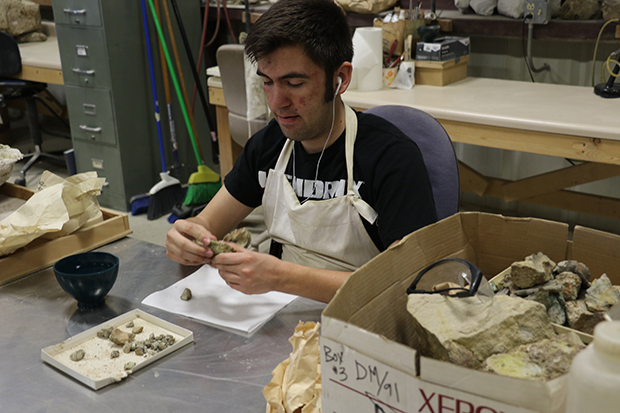 BYU student David Buckner sorts and categorizes dinosaur fossils being stored at the school’s Museum of Paleontology. The museum doubles as a research center for students and visiting scientists. Photo by Jason Swensen. 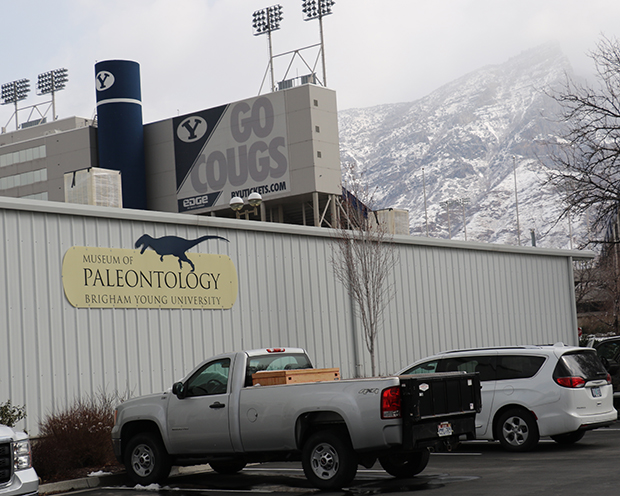 BYU’s Museum of Paleontology is located on the Provo, Utah, campus in the shadow of Lavell Edwards Stadium. Pallets of dinosaur bones were once stored under the stadium. Photo by Jason Swensen. 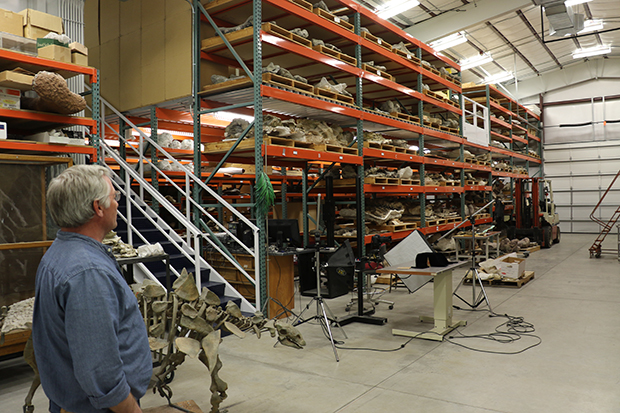 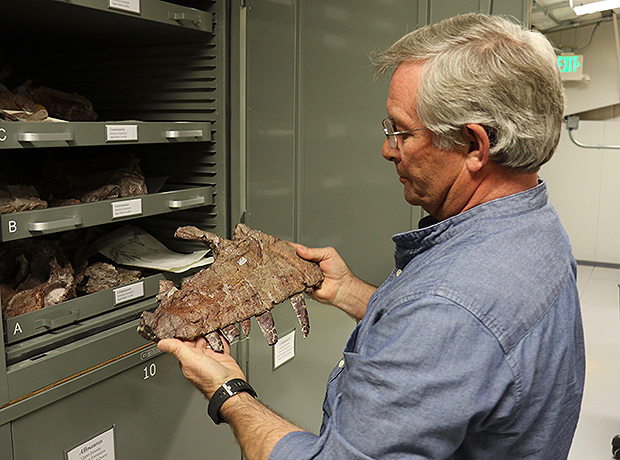 Rod Scheetz, curator of the BYU Museum of Paleontology, examines a fossilized dinosaur jawbone and teeth being stored at the facility’s vast repository. Photo by Jason Swensen. 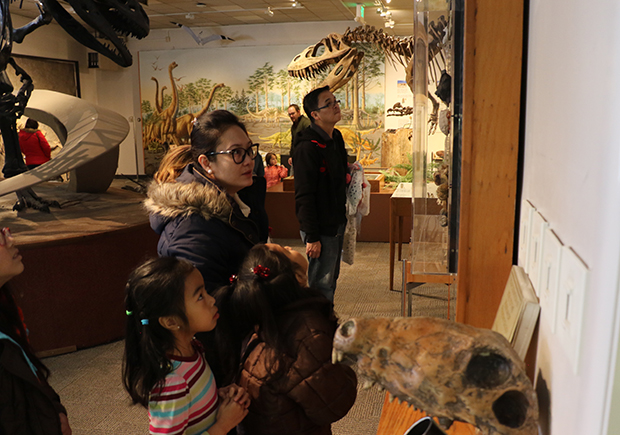 The Pulumbarit family from Las Vegas, Nevada, explores the galleries of BYU’s Museum of Paleontology. The museum is a popular destination for patrons of all ages. Photo by Jason Swensen.