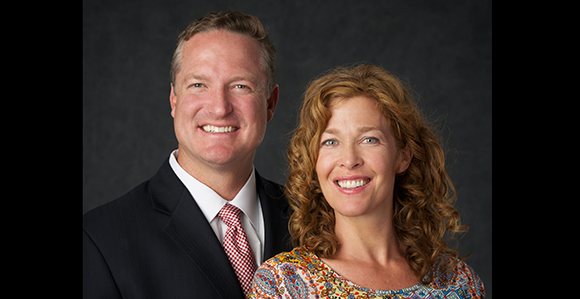 "It's not about who we are but who we may become through Jesus Christ." —Elder Jeremy R. Jaggi of the Seventy

When Elder Jeremy R. Jaggi was a teenager, his seven-year-old sister, Kristen, contracted a bacteria that attacked her brain. Doctors said she wasn’t going to survive.

Young Jeremy kneeled beside his bed in their Salt Lake City home and pleaded with the Lord to know why she had to die so soon. His sister was given a priesthood blessing and, against all odds, lived.

This was a catalyst for 17-year-old Jeremy to “get himself right with God,” leading him to seriously read the Book of Mormon for the first time. He went on to serve as a full-time missionary in the Ohio Cleveland Mission.

He would return to his knees in desperate prayer years later as his wife, Amy, was in preterm labor with their third child.

“At that moment, I felt an overwhelming peace—a peace that can only be described as the loving arms of a Heavenly Father, enveloping me with the warmth of the Holy Ghost,” recalled the recently sustained new General Authority Seventy.

That peace carried them through the short time the baby lived and the months of grief that followed with another miscarriage. “We’re all ‘tried’ in our own way, but we still ‘count it all joy’ that the Savior has provided a way for us to have peace and happiness,” Elder Jaggi said, quoting a family motto found in James 1:2.

Jeremy Robert Jaggi was born in Salt Lake City, Utah, on March 23, 1973, to Robert Stanley Jaggi and Judy Anne Roos. As a young boy in Salt Lake City, Elder Jaggi watched his parents serve those in their neighborhood. He remembers his father, a postman, giving several priesthood blessings. He understood at an early age that the power of the priesthood was real.

“The way we look at ministering now is the way my parents have always ministered—one by one,” he said.

Shortly after returning home from his full-time service in the Ohio Cleveland Mission, Elder Jaggi met a young woman named Amy Stewart at his good friend’s wedding. She had returned a year before from the Germany Frankfurt Mission.

“He and I throughout the day would catch each other stealing glances at each other,” Sister Jaggi said.

Later that evening playing basketball with his friends, Elder Jaggi told them he was going to ask her on a date.

“They literally laughed at me and said, ‘Oh, she’s been dating college graduates and professionals, and you just got off your mission. You’re a busboy at the Roof Restaurant’—which I was,” he said, laughing. But he was determined.

The next week, he and Amy went on their first date. They were married the following summer in the Salt Lake Temple on June 12, 1995.

In their married ward at the University of Utah, Elder Jaggi served as an elders quorum president, and Elder Dale G. Renlund of the Quorum of the Twelve Apostles was his stake president. “I had the chance to meet with him monthly,” he said.

Elder Jaggi received a bachelor of science degree in behavioral science and health from the University of Utah in 1997 and an executive master of business administration degree from Pepperdine University in 2002.

Elder and Sister Jaggi are the parents of five children. They give thanks to the many bishops, ward members, and neighbors who helped in times of trial and loss as they suffered miscarriages and battled infertility.

“We just see God’s divine design in bringing different people into our lives,” Sister Jaggi said. “They were angels on site.”

Sister Jaggi remembers the Relief Society president who took her to the hospital when she was in the process of preterm labor and the visiting teacher who was by her side when Elder Jaggi was out of town. Her other visiting teacher had lost two babies stillborn and could understand what she was going through.

Shortly after the Jaggis’ baby died, one of the women Sister Jaggi visiting-taught lost a child. “I could say, ‘I’m here. I can hold you. I’m broken with you.’”

“There was this infrastructure of people who knew, whose hearts could go to that place,” Sister Jaggi said. “[Heavenly Father] surrounded me with them. They were appointed to me because of the visiting teaching program.”

As Elder Jaggi reflected upon his family’s experiences and his previous callings, he said, “The one thing that I’ve learned is that God can take ordinary people and help them do extraordinary things.”

While living in Newbury Park, Elder and Sister Jaggi received a call to preside over the Utah Ogden Mission. They will never forget their exploratory interview with then-Elder Russell M. Nelson via videoconference.

“He was so sweet, so grandfatherly, so loving,” Elder Jaggi said. “At the end of the call, he said, ‘Can I give you both a hug?’ and he reached into the monitor and gave us a virtual hug.”

“We love our missionaries,” Elder Jaggi said. “They are an extended family now for us.”

Serving in northern Utah was also special for Elder Jaggi, as his ancestors from Switzerland settled in Logan and Brigham City. He met people at stake conferences who knew of his grandfather’s brothers. “Many places we’d go, a Jaggi would come out of the woodwork,” he said.

“My favorite calling has been to be a ministering brother and home teacher,” he said. “I love it because that’s what the Lord would do if He were here right now. He’d go out and minister one by one.”

Elder Jaggi was serving as an Area Seventy in the Utah Area and working for Alkermes Inc. and managing commercial real estate at HCA Investments LLC at the time of his call.

As they look forward to the next several years of service, Elder Jaggi finds comfort in President Thomas S. Monson’s oft-quoted phrase “Whom the Lord calls, the Lord qualifies.”

“I trust in that promise,” Elder Jaggi said. “It’s not about who we are but who we may become through Jesus Christ . . . as we tread down that wonderful covenant path as President Nelson has described for us.”

Sister Jaggi added, “I’m so excited to go forward and seek to hear, hearken, and heed the voice of the Lord, as our prophet has said.”