Gilbert Arizona Temple Dedicated as a “Sanctuary of Serenity” 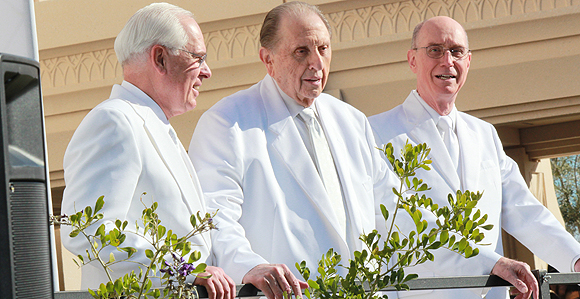 From left, Elder William R. Walker, President Thomas S. Monson, and President Henry B. Eyring at the cornerstone ceremony for the Gilbert Arizona Temple on March 2.

The Gilbert Arizona Temple was dedicated Sunday to be a sanctuary of serenity, a refuge from the storms of life and the noise of the world, and a house of quiet contemplation concerning the eternal nature of life and the Lord’s divine plan for His children.

President Thomas S. Monson presided over the three sessions to dedicate the Church’s newest temple, the 142nd operating temple in the world and the fourth in Arizona.

“It was my privilege, on April 28, 2008, to announce that a temple would be built here in Gilbert,” he said Sunday morning. “Following early preparations, including the city’s approval of detailed plans for the temple and the surrounding area, ground was broken on November 13, 2010.

“Now, just a little more than three years after the groundbreaking, we are gathered here to dedicate this magnificently beautiful Gilbert Arizona Temple.

”Let us open our hearts and open our minds and open our souls to the spirit here today. I would hope that we would all remember not just what is said, but also, and perhaps more importantly, let us remember how we feel. I think it important that we feel close to our Heavenly Father on this special day.”

President Monson and President Henry B. Eyring, First Counselor in the First Presidency, took turns speaking and offering the prayer to dedicate the temple.

The dedication events began with the official sealing of a symbolic cornerstone in which was placed a container filled earlier with written histories, photographs, documents, and other items of significance to the history of the Church and the temple district.

At the cornerstone ceremony and after the last session of the temple’s dedication, President Monson shook hands with many people. He paid special attention to young children and youth, engaging them in brief conversations.

On the eve of the dedication, a cultural celebration was held in a park near the temple. Some 12,000 young people, ages 12–18, performed in the event, which had as its theme “True to the Faith.” The storyline began in Old Testament times and continued with enactments from the Book of Mormon, LDS history in Arizona, and the present.
Arizona didn’t live up to its stature of being one of the driest states in the U.S. for at least one night: rain poured down on performers and spectators. Since the event was staged in a retention basin, it took only a few minutes before water puddled on the ground. Despite the challenges, the young people continued with the program, performing the songs and dances they had rehearsed regularly since early January.

One performer, Jake Dalton, 12, described the experience as “really fun. It was amazing how I couldn’t really feel we were wet, even though we were soaked.” If the chance came along again to perform in the rain, he said, “I would do it in a minute; I would do it multiple times.” 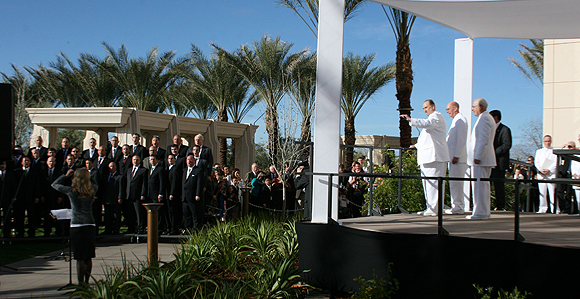