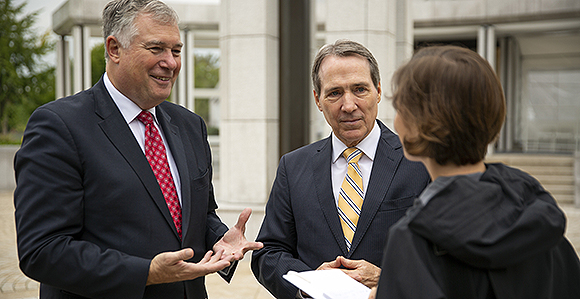 Elder Erich W. Kopischke of the Seventy, left, and Elder Gary B. Sabin, the Europe Area President, speak with a reporter after a press briefing on the Frankfurt Germany Temple grounds in Friedrichsdorf, Germany, on Monday, September 9, 2019.

“We should not underestimate the power of the temple’s influence on those who are not members of the Church.” —Elder Erich W. Kopischke of the Seventy

A German General Authority Seventy asked German journalists here on Monday to help their readers and viewers on a secularized continent better understand The Church of Jesus Christ of Latter-day Saints.

They later received an even tougher assignment from Elder Erich W. Kopischke, who guided reporters and photographers on a tour of the expansion and major renovation of the Frankfurt Germany Temple one week before a public open house expected to draw tens of thousands of people.

A German photojournalist, unable to use his camera during the special media tour because of the building’s sacred nature, told Elder Kopischke the peace inside the temple was touching. A reporter described a similar feeling.

Later, reporters sat in the celestial room. The peaceful silence was broken only by the sound of their pens scribbling descriptive notes in quad-ruled notebooks.

In all, 14 journalists toured the temple on Monday, including one reporter from a national newspaper based in Frankfurt and another from a paper in Friedrichsdorf. Six more journalists are scheduled on tours later this week.

“Members of the Church know the temple is a place where we have very, very, very personal feelings,” Elder Kopischke said. “The people that only walk the grounds here or who will come to the open house have the same feelings we do, because they belong to the family of God.”

He said Monday’s experience reminded him of the dedicatory prayer of the ancient temple in Jerusalem, in which King Solomon asked God to hear and answer the prayer of the stranger who would come to pray in the temple, so that the whole world would know God’s name and love him (see 2 Chronicles 6:32–33).

“If you think about this temple, it is a house of the Lord where a stranger can come and can feel something that they cannot feel at any other place,” Elder Kopischke said. “We should not underestimate the power of the temple’s influence on those who are not members of the Church.

“For me as a European, living in such a secular world here with so much hedonism, so much wickedness, it is my hope that the temple and the temple grounds here become a magnet for the seekers.” 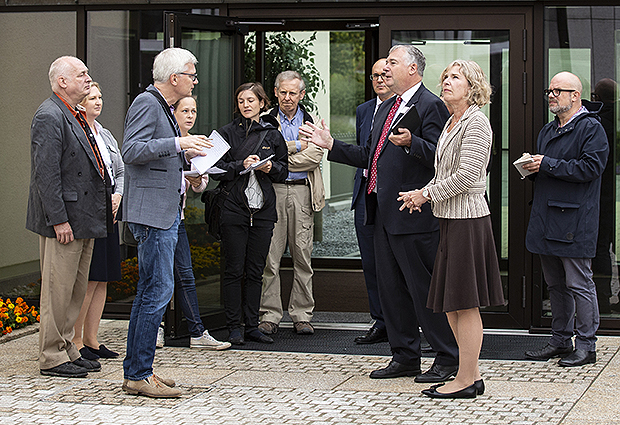 Elder Erich W. Kopischke of the Seventy, center, speaks to German reporters on the patio between the Friedrichsdorf stake center and the Frankfurt Germany Temple on Monday, September 9, 2019, in conjunction with the beginning of the public open house before the temple is rededicated. Photo by Tad Walch, Deseret News.

The renovation began painfully here in Friedrichsdorf, a quiet, picturesque town of 25,000 people 12 miles north of Frankfurt. “On a Saturday, we did endowments for our ancestors. We came back on Tuesday to what no longer was a dedicated temple and moved things out,” said Andreas Kleinert, an investment banker who is part of the temple rededication committee. “We carried the altars out of the sealing rooms. We thought we would be without our temple for two years.”

Problems were discovered in the foundation and, ultimately, the temple was gutted. Only the outer walls of Vermont white granite, the copper roof, and the stained glass windows remain. The baptistry was removed altogether. A much larger one was built underground outside the walls of the temple, as has been done in Boise, Chicago, and Dallas. That created new space for needed expansion.

That theme was followed outside. In recent years, the Church obtained permission to move a street to expand the temple grounds. A former meetinghouse was demolished. In its place stands a new stake center, home to two wards. A hostel (patron temple housing) and temple missionary housing have joined the 1890s villa preserved as the temple president’s residence by an agreement between the Church and city leaders more than 30 years ago.

The grounds have undergone major new landscaping, too. The temple is nestled directly in the midst of a neighborhood next to the city center, and the grounds now double as a park through which neighbors walk, pushing baby strollers or heading to school, work, or nearby restaurants.

The public open house is scheduled from September 13–28. Elder Dieter F. Uchtdorf of the Quorum of the Twelve Apostles released a videotaped invitation, and the Church has placed signs outside the temple and in the windows of businesses around the city. The rededication is scheduled on October 20.

The past four years were a major adjustment for members living nearby.

“We couldn’t say any more, ‘I have free time tonight, I’ll go to the temple,’” Friedrichsdorf Stake President Mark-Rene Harth said. “We had to be more deliberate. To really plan a temple trip made it special. It was a neat experience for us.”

“It was interesting not to have a temple next door,” added Kleinert, who has lived by either the Freiberg Germany Temple or the Frankfurt Germany Temple his entire life. “We drove to London, to my parents’ home in Freiberg, to Switzerland, to The Hague. We really started to love the temple even more.”

President Harth helped with security as a 17-year-old boy during the original 1987 open house that drew 70,000 people. His wife, Ronja Harth, was also a teenager stunned by the long lines while she worked as an usher.

“I remember only one other thing,” she said. “I saw the sealing room, which was blue, and I said, ‘That’s where I want to marry. In that room.’” 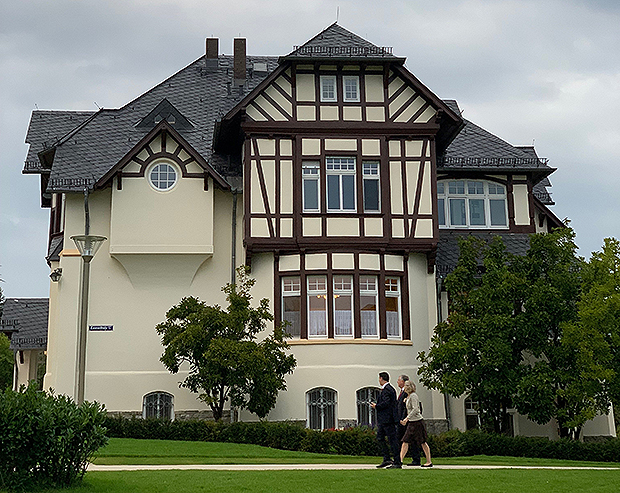 The 1890s villa the Church agreed to maintain as part of the permit process to build the temple in the 1980s. It is used as the temple president’s residence.

The Harths were sealed there a few years later. Last week, their teenage son toured the temple as one of the 1,000 volunteers who will help during the open house. He will put coverings on visitors’ shoes. During his tour of the temple, he saw the new sealing room and said, “That’s where I want to get married.”

Elder Kopischke told the journalists that for some outside the Church, the temple still seems mysterious. So he told journalists to ask all the questions they wanted and promised transparent answers.

“We hope you feel some of the personal feelings we do in the temple,” he said.

“The temple speaks for itself.” 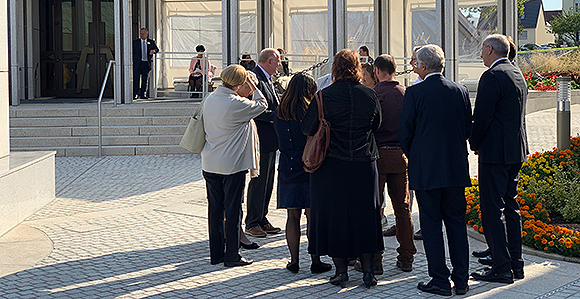 Media toured the Frankfurt Germany Temple on September 9, 2019, in conjunction with the beginning of the public open house before the temple is rededicated. Photo by Tad Walch, Deseret News. 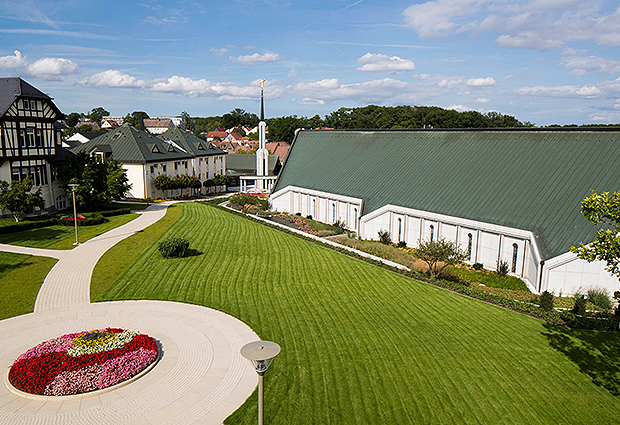 Exterior of the Frankfurt Germany Temple.