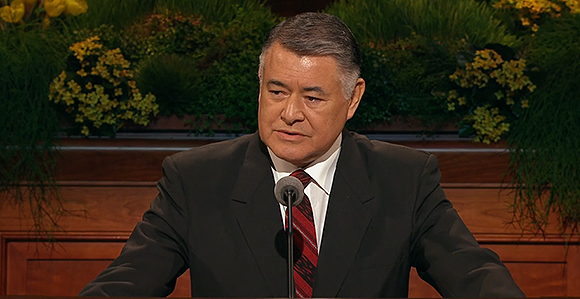 Elder Carlos H. Amado of the Seventy speaks during the April 2014 general conference.

In past sessions of general conference, Church leaders have delivered their talks in English, even if it wasn’t their native language. The talks were then interpreted from English into 90+ languages so that Latter-day Saints and friends around the world could hear them in their own languages.

However, beginning with the upcoming general conference on October 4–5, 2014, speakers whose primary language is not English will have the choice to deliver their talks in their native tongue.

According to Dale Jones in the Church’s Public Affairs office, in cases when speakers give their address in other languages, “English subtitles will be shown on screens in the Conference Center, and a live English interpretation will be provided for all other English-language broadcasts including satellite, cable, television, and the Internet.”

Thirty-one General Authorities speak languages other than English as their first language.