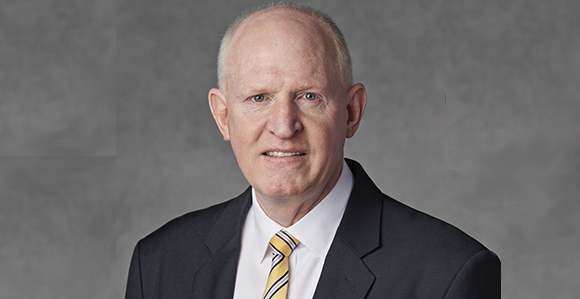 Elder Kelly R. Johnson, General Authority Seventy, was sustained in the April 2020 general conference of The Church of Jesus Christ of Latter-day Saints.

Several moments from Elder Kelly R. Johnson’s life have proved important for building his testimony in the gospel of Jesus Christ. From an early age, his parents taught him the truths of the gospel and encouraged him to build up his own faith.

In middle school and high school, Elder Johnson took the charge to fulfill his seminary assignments seriously. He read the Book of Mormon for the first time while he was in ninth grade and remembers feeling his testimony grow stronger with every word.

Another pivotal moment came when he was called as a new bishop at the age of 31 and, on the very same day, was diagnosed with Bell’s palsy—a condition in which the muscles on one side of the face become paralyzed or weakened. It was a challenging time in life not only because of the discomfort and embarrassment caused by the condition but also because of the many new responsibilities he had as a bishop. But that difficult time became a blessing and a humbling experience, he said.

“Going through that and not knowing what the long-term situation would be, I developed a compassion for individuals that has been with me through the rest of my life,” he said. “I really learned that people go through tough and sad things that they can’t control that impact their abilities and their feelings and their confidence.”

But perhaps one of the most life-changing and powerful experiences Elder Johnson can recall came with the birth of his fourth child, Jace, who was born with a condition called sagittal synostosis.

A somewhat dangerous condition for infants, sagittal synostosis occurs when the sagittal suture of the skull fuses closed prematurely, causing abnormal growth of the skull and resulting in a long and narrow head shape. In order to prevent long-term complications from the condition, doctors advised Elder Johnson and his wife, Terri Lynn Johnson, to have their son undergo a procedure in which the middle section of the skull is removed when a child is about three months old.

“This was a really challenging thing for us to think about,” Elder Johnson said. “To turn him over to the doctors and let them remove a portion of his skull. It was scary.”

In addition to having their newborn son undergo a major surgery, the Johnsons were told they would need to have their son fast for 12 hours leading up to the surgery—something Elder Johnson said was very concerning at the time because, as a new baby, Jace was eating every two hours.

“We prayed for the Lord to bless him,” he said. “And I gave him a priesthood blessing to be comfortable through the whole process.”

The 12 hours leading up to the surgery were remarkable, Elder Johnson recalled. Their son slept well and didn’t fuss. It was as though, for those many hours, he didn’t need to eat. When they drove to the hospital, they assumed Jace would be screaming and crying the whole time because of hunger. But he was calm, Elder Johnson said. And although the surgery was intensive, it was successful, and their son grew up to be healthy and strong.

That experience was a true testimony builder, said Elder Johnson, confirming to him that “God hears the prayers of concerned parents and the power of the priesthood really is able to bless individuals.”

Knowing the Lord is there for him and his family has, in part, made Elder Johnson’s new calling less daunting.

At times, service in the Lord’s Church may seem inconvenient. But just as the Savior called His disciples and straightway they dropped their nets and followed Him, “whatever we’re asked to do, we’re willing to do it,” said Elder Johnson, sustained a General Authority Seventy on April 4, 2020.

That’s the attitude Elder Johnson has had throughout his life. No matter where the Lord calls him or his family, they go with willing hearts and minds—looking to find good no matter their circumstances.

Born in Pleasant View, Utah, on January 16, 1963, to Harold Raymond Johnson Jr. and Helen Cragun Johnson, Elder Johnson grew up in Ogden, Utah, and had what might be deemed a fairly typical upbringing for a member of the Church living in Utah.

He was called to serve a full-time mission in Bangkok, Thailand, and prior to graduating from his undergraduate program in 1987 Elder Johnson met Terri Lynn Bartrum while singing together in the Ogden Institute Choir. They were sealed in the Salt Lake Temple on March 27, 1986. They have 5 children and 16 grandchildren.

Born in a military family in Sumter, South Carolina, Sister Terri Johnson remembers as a young girl visiting many different churches and being taught to fear God rather than believing in a loving Heavenly Father. It wasn’t until her family had moved to Cedar Rapids, Iowa, that the missionaries found them and she was baptized.

“I learned from an early age what it’s like to not have the gospel,” she said, noting how much of a difference it has made in her life. “I remember making a promise that I would never not sacrifice what was required to know that this is the true Church, and I’m so grateful to be a member.”

But knowledge often comes with sacrifice, Sister Johnson noted. As a couple, many of the Johnsons’ callings in the Church have required great sacrifices, including being far from their children and family at various times. But in every new calling, they have found tremendous blessings, she said.

Unable to serve a mission in her youth, Sister Johnson said serving with her husband as he presided over the Thailand Bangkok Mission from July 2015 to June 2018 was one of the greatest experiences of her life.

“It was amazing to see how people’s lives were fully changed by the gospel,” she said.

And even though Elder Johnson’s call as a General Authority will require new sacrifices, Sister Johnson said they “want to be a family that Heavenly Father can depend on.”