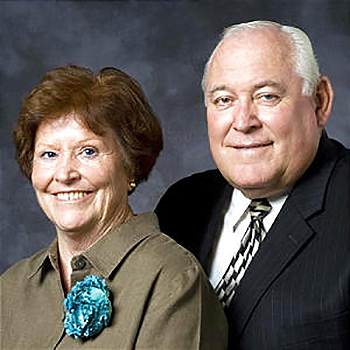 Elder Duane B. Gerrard and his wife, Kay Bennion, at the time they were called to serve as temple president and matron of the Dallas Texas Temple in 2007.

Duane Bird Gerrard was born on April 22, 1938, in Murray, Utah, the son of Leonard Gerrard and Mildred Bird Gerrard. He was raised in Utah and lived most of his life in the state. He married Kay Bennion in the Salt Lake Temple on September 11, 1959. Together they raised 8 children and had 29 grandchildren and 37 great-grandchildren at the time of his death.

Elder Gerrard graduated from Utah State University with a degree in aeronautics and then joined the United States Air Force, where he trained as a pilot. During his time with the military, Elder Gerrard flew 350 combat hours during a tour of duty in Vietnam. His military service also took him to Florida, Oklahoma, Hawaii, and Utah’s Hill Air Force Base.

After completing his military service, Elder Gerrard worked for Western Airlines and then Delta Airlines as a system manager for flight safety. He retired on April 1, 1997.

During his time working for Delta, Elder Gerrard and his wife, Kay, raised their four children. They also became foster parents and eventually adopted four more children whose parents—friends of theirs—had died.

“I had just designed and built a home with seven bedrooms,” Elder Gerrard said. “At the time we had only four children. But we had room for four more.”

The decision to take in four additional children was made prayerfully, said Elder Gerrard at the time he was called as a General Authority Seventy. It was a pattern he applied throughout his life. “Every important decision we have made . . . has been through thoughtful, heartfelt prayer, and we have always received the proper answers,” he said.

Throughout his life, he held many different Church callings, including as a bishop, stake president, regional representative, Area President, temple president, and General Authority Seventy.

Elder Gerrard will be buried in the Kaysville City Cemetery following a private service for his family and friends.