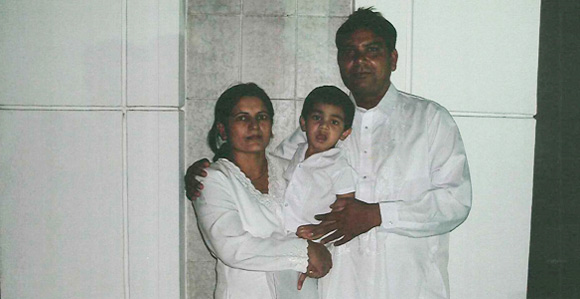 Riaz Gill, his wife, Farah, and son, Ammon Phinehas, were able to attend the Manila Philippines Temple and be sealed as a family in 2010, thanks to the Church’s General Temple Patron Assistance Fund

“Those who understand the eternal blessings which come from the temple know that no sacrifice is too great, no price too heavy, no struggle too difficult in order to receive those blessings.” —President Thomas S. Monson

Since the time he entered the Manila Philippines Temple in July 2001, just before leaving for his mission to Singapore, Riaz Gill of Karachi, Pakistan, knew that he wanted to return to the temple so he could have an eternal family.

In 2007, his wife, Farah, was baptized, but funds were tight and they didn’t know when they would be able to make the trip to the temple, more than 3,500 miles (5,700 km) away. With the birth of their son, Ammon Phinehas, in 2009, their desire to be sealed in the temple grew even stronger, and late in 2010, with help from the Church’s General Temple Patron Assistance Fund, their prayers were answered.

“Going to the temple with my family has helped me to make my testimony stronger,” Brother Gill said. “After our temple visit, it seems like I have more to give to the Lord. … The temple visit was so good and faith-promoting, it is hard to express in words.”

While there, Brother Gill was also able to perform ordinances for his father, grandfather, and father-in-law, who have all passed away. He had the work done for his mother, and he was sealed to his parents.

“It has been a great privilege for me and my family to visit the temple,” he said. “I want to give my special thanks with a lot of prayers to the leaders who made this temple trip possible.”

Since 1992, the 100 percent-member-generated fund has been a way to provide a one-time visit to the temple for members living outside of the United States and Canada who otherwise would not be able to go. Members wishing to donate to the fund simply write in “Temple Patron Fund” on the “Other” section of the normal contribution slip. Individuals can also donate to the fund through LDS Philanthropies.

During general conference in October 2011, President Thomas S. Monson encouraged members to contribute to the General Temple Patron Assistance Fund saying, “There are still areas of the world where temples are so distant from our members that they cannot afford the travel required to get to them. They are thus unable to partake of the sacred and eternal blessings temples provide” (“As We Meet Again,” Liahona and Ensign, Nov. 2011, 4–5).

“The intent of this fund was to help those clearly in parts of the world where it would be more challenging to attend the temple,” said Elder William R. Walker, executive director of the Temple Department. “The one-time provision is to provide for an individual to receive his or her own ordinances.”

Some of the greatest demand, Elder Walker said, comes from Africa, the Pacific, and Asia. Stake presidents and mission presidents make recommendations to their Area Presidency, which administers the fund on a country-by-country basis.

During 2009 and 2010, approximately 4,000 members utilized the fund to travel to a temple for the first—and possibly the only—time.

In order to bless as many lives as possible, Elder Walker said, “We look at the temple where we can get the most economical airfare. That means it’s not always based on proximity or even on whether or not the temple is in their area.”

Each member who uses the fund is expected make some sort of sacrifice or contribution.

“In some places just getting a passport would be expensive and very difficult,” Elder Walker said. “And so in some areas, where members have to leave their country to go to the temple, they have to supply their own passport to be able to use the fund. In some countries, it’s just a set amount of money. To some it may not seem like much, but for them it may be all they could save in six months.”

Elder Walker said that those who contribute to a goal generally find they appreciate it more: “In almost every case people have done their best to contribute and have been richly blessed and they have not taken it for granted,” he said.

In addition to making it possible for people to go to the temple, the funds are also used to purchase seven sets of garments for each individual so that they can honor their covenants once they return home.

President Monson’s statement during conference was the first time the fund has been announced over the pulpit by the prophet. That, coupled with the growing demand on the fund, will most likely lead to an increase in donations, Elder Walker said.

“We still have people coming into the Church, and we’ve not nearly satisfied the needs in many areas,” he said. Citing President Howard W. Hunter’s 1994 counsel that all worthy members carry a temple recommend, he continued, “We have many faithful members of the Church who have current temple recommends but who have not yet been to a temple and don’t have an immediate prospect of going to the temple.”

During April 2011 general conference, President Monson gave a talk entitled, “The Holy Temple—a Beacon to the World,” in which he highlighted the importance of the temple.

“Those who understand the eternal blessings which come from the temple know that no sacrifice is too great, no price too heavy, no struggle too difficult in order to receive those blessings,” he said. “They understand that the saving ordinances received in the temple that permit us to someday return to our Heavenly Father in an eternal family relationship and to be endowed with blessings and power from on high are worth every sacrifice and every effort.”

Since becoming President of the Church in 2008, President Monson has announced more than two dozen temples.

Elder Walker said President Monson’s announcement of the fund came from his love for temples and his sensitivity to the Saints who are the primary beneficiaries of the fund.

“When you go to these faraway places, you get the feel for the people and the challenges they have,” Elder Walker said. “This fund will be to the blessing of many people.”