Four Women Were Witnesses to Book of Mormon Translation Process 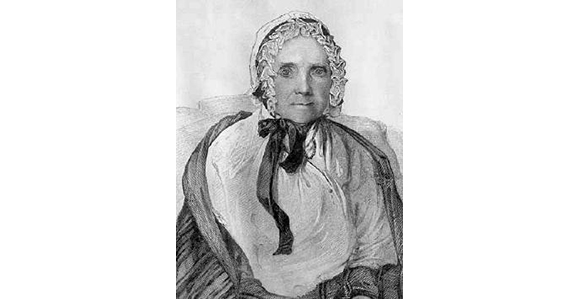 In addition to the visual and audible witness, Lucy Mack Smith would help find hiding places for the plates and often defended the reality of the plates.

“By recognizing their contributions, we not only place women back into the narrative in which they were integral actors, but we also expand the scope of ways to witness and what it means to be a witness.” —Amy Easton Flake, BYU assistant professor

Within the first few pages of the Book of Mormon, readers come across the names of 11 witnesses, each of whom has signed his name as someone who has either seen or felt the ancient plates that Joseph Smith used to translate the Book of Mormon.

Although their names aren’t included in the official list, four women can be added as additional witnesses of the physical reality and divine process Joseph Smith went through in the translation of the Book of Mormon.

“Each of these women—Mary Whitmer, Lucy Mack Smith, Lucy Harris, and Emma Smith—aided in the translation of the Book of Mormon and offered her own witness of the plates’ reality,” Amy Easton-Flake said during one of the sessions of the Sperry Symposium on October 23. “By recognizing their contributions, we not only place women back into the narrative in which they were integral actors, but we also expand the scope of ways to witness and what it means to be a witness.”

Recognizing the four names are familiar to many Church members, Sister Easton-Flake joined with Rachel Cope, both assistant professors in the Religion Department at BYU, in sharing insights regarding the important role the four women played in the translation of the Book of Mormon.

“Touch, sound, spiritual impressions, and visions may in fact produce, as these women illustrate so clearly, a more lasting and more powerful experience than sight,” Sister Easton-Flake said. “In turn, through these women’s witnesses, we see how the translation of the Book of Mormon both required and created a community—male and female, young and old, family and friends—who worked together on this important project.”

Sometimes referred to as the “12th witness” by historians because of the parallel experience to that of the canonized witnesses, Mary Whitmer is the only known woman to have physically seen the plates, Sister Easton-Flake said.

In June 1829, Mary and her husband, Peter Whitmer, opened their home to Joseph and Emma Smith and Oliver Cowdery. Because of the Whitmers’ hospitality, Joseph was able to focus his efforts on translation, allowing the process to move forward rapidly.

On top of a large family of her own and many responsibilities in the home, Mary Whitmer began to feel her labor was too much. As those feelings began to grow, a stranger appeared to her, explaining the work that was going on in her home, and showed her the plates. He encouraged her in her work and soon vanished.

Because of that experience, Mary was able to continue in her labors, helping the work move forward. Many of her family would later be witnesses to the plates.

Although the Whitmer family members had a falling out with the Church, Mary is among those who “never altered or denied her testimony of [the plates’] reality, their divine origin, and the message contained in the book translated from them.”

“As a memoirist and as a participant in the events surrounding the translation and publication of the Book of Mormon, Lucy Mack Smith introduces various ways of witnessing beyond the visual, including record keeping, sensory experiences, and spiritual impressions,” Sister Cope said.

The Prophet Joseph would often share his experiences with his family, including descriptions of the account on the plates before he even had them in his possession.

“Although the Smiths lacked tangible evidence of the plates at this time, they experienced spiritual confirmation, and thus they anxiously awaited the day when Joseph would receive the important record he had described,” Sister Cope said. “Together, the family became witnesses of the Book of Mormon even prior to Joseph’s acquiring of the plates.”

After Joseph had obtained the plates, Lucy and other family members saw their outline through the cloth that covered them and even handled them on occasion.

In addition to the visual and audible witness, Lucy would help find hiding places for the plates and often defended the reality of the plates.

“I know she is a little bit more unusual, but I think there is a lot more to her story than we know or recognize,” Sister Cope said. “Within the pages of her memoir, Lucy Mack Smith introduces her readers to Lucy Harris. Although Lucy Harris is typically remembered for her antagonism toward the Book of Mormon, … it is important to recognize that Lucy Smith’s history reveals another side to this complex figure.”

Shortly after Joseph and Emma had obtained the plates, Joseph asked his mother if she would speak with their wealthy acquaintance, Martin Harris. The mother agreed but decided to first meet with Harris’s wife.

According to Lucy Smith’s account, Lucy Harris was intrigued and expressed an immediate interest in the plates, offering to donate a considerable sum of money from her own private purse for Joseph’s translation efforts. But prior to the donation, Lucy Harris wanted to see the plates, and Joseph refused.

“[Lucy] Harris, who was staying in the Smith home overnight, retired to bed following her conversation with Joseph,” Sister Cope said. “The following morning, Lucy Harris shared a very remarkable experience that she had had that night with the Smith family.”

In her dream she recalled a personage that appeared to her and chastised her for interfering with the work. The angel then showed her the plates, resulting in a powerful witness. Upon waking up, Lucy Harris insisted on giving Joseph $28—personal money she had received from her mother prior to her mother’s death.

“Although Lucy Harris did eventually become antagonistic to the work, … Lucy Smith confided that she continued to believe in their physical reality,” Sister Cope said.

As the person closest to Joseph and with him from the beginning to the very end of the translation process, Emma “was arguably more intimately involved with the coming forth of the Book of Mormon than any other individual besides Joseph,” Sister Easton-Flake said.

Emma’s involvement began the day she accompanied Joseph to the Hill Cumorah to obtain the plates and continued as she later acted as a scribe, witnessing the translation process. Although she never saw the plates, at times they were placed under their bed, she would sometimes move them as she cleaned, and other times she would see them wrapped in a small cloth.

“Her witness of the plates physically takes on an added dimension when she describes ‘tracing their outline and shape,’” Sister Easton-Flake said. “She reports that the plates seemed to be pliable and would rustle with a metallic sound. … This complete assurance of the reality of the plates—despite her never seeing them—is a powerful statement about the validity of every witness to see beyond the visual. …

“Almost two centuries later, the miracles of this great work may resonate more and grow greater faith when we recognize how God used dedicated men and women to bring forth this great work of translation and restoration.”