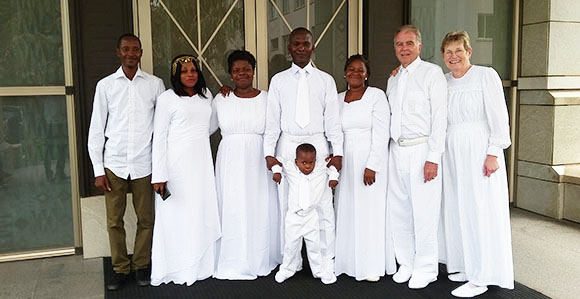 Elder and Sister Blackwell made a trip to the temple with a family who they served and developed a close relationship with in their roles as medical missionaries and as temple preparation teachers.

“I sincerely believe one of the very best things we can do for our children and grandchildren is to leave them for a time as missionaries for the Lord Jesus Christ.” —Elder Weatherford T. Clayton of the Seventy

Elizabeth Blackwell started her career in emergency medicine and then spent many years at the BYU Student Health Center as a general physician. Her husband, David Blackwell, was a mental health therapist at residential treatment facilities and also worked part-time for LDS Family Services in American Fork, Utah.

When the Blackwells reached retirement age, they were introduced to a special opportunity to use their life’s work to bless and support others.

Elder Donald B. Doty, who oversaw the health of missionaries worldwide at the time, invited Sister Blackwell and some of her colleagues to contact him when they were about to retire to learn about opportunities to serve.

“Dave saw Dr. Doty in the Church Office Building and mentioned to him we were retiring and interested,” Sister Blackwell said. “So he told us that there were several opportunities—one in Peru and one in the Europe East Area.”

The Blackwells decided to put in their mission papers and soon after received a call to the Europe East Area. Elder Blackwell served as the area mental health advisor (AMHA) and Sister Blackwell served as the area medical advisor (AMA). After this first mission together, they were then called on a second mission to do the same thing in the West Africa Area.

“What we were trying to do is keep missionaries on their missions—whether it was from a mental health standpoint or from a medical standpoint,” Brother Blackwell explained. “Sister Blackwell worked at BYU, so her clientele at BYU were the same age as missionaries. In my case, I also worked with young adults. So what we did professionally was what we then would do as missionaries.”

“There were difficult moments where you sometimes have to escort a missionary home,” Elder Blackwell said. “There was also the satisfaction of being able to help missionaries solve some of those problems they had.”

At the conclusion of their second mission in the West Africa Area, the Blackwells wrote a letter to Elder Weatherford T. Clayton, a General Authority Seventy, about how their missions affected their lives. In the letter, they said: “We became ‘one’ as a couple as we worked together helping missionaries who sometimes needed the attention of both of us and required us to consult with each other to find the appropriate interventions. In these circumstances we felt the Lord increase our capabilities to fulfill the requirements of our calling.”

Elder Clayton is the assistant executive director in the Missionary Department and is the chairman of Missionary Health Services. Elder Clayton has visited areas around the world, including Africa, Brazil, the Philippines, and islands across Polynesia to help determine the level of medical care available to missionaries in those areas. He expressed the great importance of the effort that missionaries like the Blackwells make within the Lord’s work.

Elder Clayton said he believes many members of the Church who serve in the medical community can continue to be a blessing around the world after their retirement.

The Missionary Department has a variety of opportunities in health services, including:

Besides these, there are other opportunities that come up from time to time that are very unique.

“In American Samoa, there's a hospital called the LBJ Tropical Hospital,” Elder Clayton said. “And the administrator there actually wants retired physicians to come and practice medicine for 18 months in the fields of radiology, orthopedics, emergency medicine, and internal medicine. This mission would be to actually practice medicine, and it is the only place in the world where we send missionaries out with this intent. The hospital itself covers the licensing and malpractice for those physicians.”

“I sincerely believe one of the very best things we can do for our children and grandchildren is to leave them for a time as missionaries for the Lord Jesus Christ, inviting others to come unto Him through faith in Christ and His Atonement, repentance, baptism, receiving the gift of the Holy Ghost, and enduring to the end by serving in our assignment as medical missionaries,” said Elder Clayton.

Referencing Doctrine and Covenants 100:1, where the Lord tells Joseph Smith and Sidney Rigdon their families are in His hands as they are doing His work, Elder Clayton explained the importance of the work such missionaries are doing.

In their letter to Elder Clayton, the Blackwells shared similar sentiments. “We always received the help we needed, sometimes in unforgettable, miraculous ways. We found that our family was well-looked after in our absence. The experiences and knowledge we brought back to our loved ones compensated for the time lost with them.” 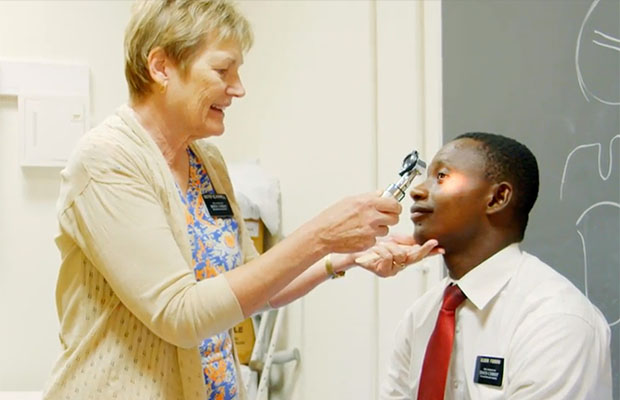 Screen capture of Sister Blackwell in a video on seniormissionary.lds.org. 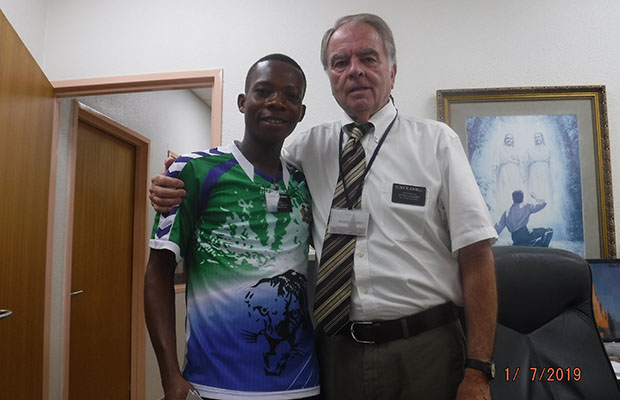 After his career as a mental health therapist in Utah, Elder Blackwell used his professional experience to serve as the area mental health advisor in the Europe East Area and the Africa West Area. Photo courtesy of David and Elizabeth Blackwell. 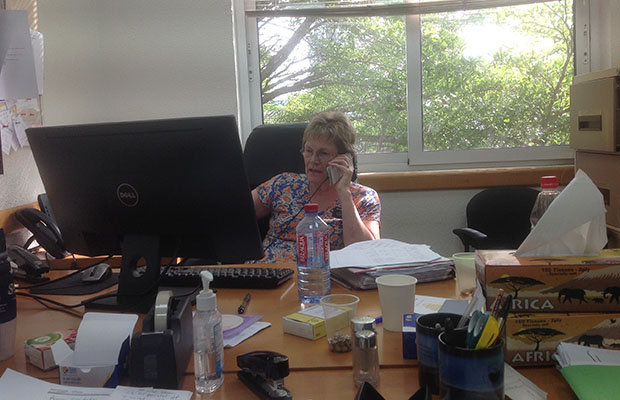 Sister Blackwell conducts phone consultations on her most recent mission in the Africa West Area. Photo courtesy of David and Elizabeth Blackwell.