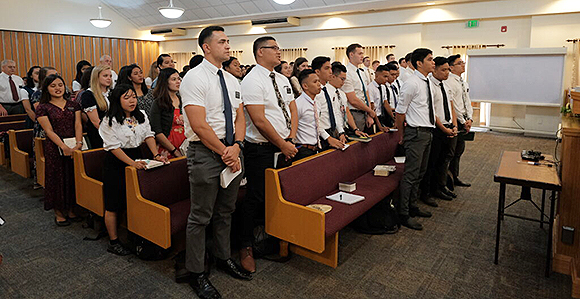 Missionaries in Cebu, Philippines, gather for a meeting with Relief Society General President Jean B. Bingham, during a ministry visit in February 2020.

“With a new travel directive from the Philippines government and due to a general disruption to their ability to carry out their service, all missionaries who are not native to the Philippines are being moved out of that country. These missionaries will return to their home countries for new temporary assignments. They will begin their new assignments after completing a 14-day period of self-isolation at home as a precaution.”

The missionaries’ evacuation from the Pacific Islands nation—home to hundreds of thousands of Church members—was apparently being executed in compliance with a Monday, March 16, presidential proclamation directing foreign missionaries to immediately leave the country.

The proclamation was filed at the same time the Filipino government was making sweeping actions in an effort to control the spread of the coronavirus.

For families of elders and sisters serving in the Philippines, the news of the evacuation prompted a range of emotions at a moment already defined by uncertainty and change.

Chris Harrington’s 20-year-old son, Elder Hunter Harrington, is assigned to the Philippines Manila Mission. The Provo, Utah, resident received an email from his son’s mission president early Tuesday saying that “the missionaries would be returning home.”

Harrington is awaiting further details on the evacuation. He doesn’t know when his son will be flying back to the United States or where he will be landing.

Harrington does know his missionary son is surely heartbroken to end his labors in the Philippines earlier than planned.

“I’m devastated for him,” he said. “He loves the Filipino people.”

But Harrington added he is also supportive of any actions that protect the missionaries.

Meanwhile, the Philippines placed half the country—about 50 million people—under an “enhanced community quarantine” in an effort to prevent the spread of the virus.

Luzon, the Philippines’ largest and most populous island, which includes the capital, Manila, has effectively been locked down. All mass public transportation has been suspended and residents told they can leave their homes only for essential items, according to CNN affiliate CNN Philippines.

Offices have been shut down, and only supermarkets, convenience stores, hospitals, medical clinics, pharmacies, and banks—as well as food delivery services and water stations—will be allowed to remain open.

From Tuesday midnight local time, people have 72 hours to leave the island if they wish, after which all air travel to Luzon will be restricted.

Filipino nationals, their spouses and children, permanent residents, and holders of diplomatic visas will still be allowed entry, as will cargo, according to CNN Philippines.

The Philippines has long been a stronghold for the Church, with missionary work stretching back to the Spanish-American War in 1898.

In late April of 1961, Elder Gordon B. Hinckley traveled to the islands and met with a small group of American residents, military personnel, and Filipino members and officially opened the Philippines for missionary work.

Six years later, the work had progressed to the point where the Philippine Mission was organized.

By 1969, the Church had spread to eight major islands and had the highest number of baptisms of any area in the Church.

The Philippines Missionary Training Center in Manila was opened in 1992.