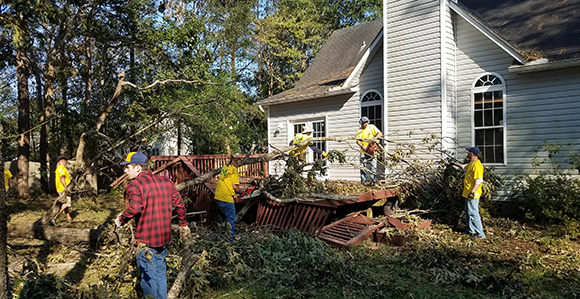 “I was astounded at the devastation and yet the tender mercies of the Lord.” —Rose Mary Abrams

But for President Matthew Holland and the elders and sisters he leads in the North Carolina Raleigh Mission, a couple more words belong to the list: Miracle. Inspiration.

The Raleigh missionaries have witnessed several miraculous and inspired moments. Prayers, President Holland said, are being answered. Meanwhile, a storm that many predicted would hit landfall as a category 5 hurricane was markedly weaker when it arrived.

To be sure, the damage wrought by Florence was awful. Dozens died and many more lost their homes and possessions. And the suffering continues in saturated cities across the Tar Heel State. But most agree it could have been worse.

Many North Carolinians, perhaps inspired by a divine impulse to care for others, are stepping forward to help. Latter-day Saints are joining the legions giving time, muscle, comfort, and cash to offer relief to those in need.

The North Carolina Raleigh missionaries were firsthand witnesses to another Florence-related miracle during a recent hastily scheduled mission conference.

Following the September 22 gathering in the stake center chapel in Raleigh, the elders and sisters were instructed to walk to the cultural hall. Waiting for them were rows of donated jeans, shirts, shoes, gloves, socks, and caps.

Call it Christmas in September.

“It was a sweet experience and a distinct moment of inspiration and miracle,” said President Holland.

Under normal circumstances, the rugged work clothes laid out precisely on the tables would seem curious gifts. Missionaries are accustomed to serving in white shirts and ties—or dresses and skirts. But at that moment, a practical pair of work boots, sturdy jeans, and gloves was exactly what they needed.

The elders and sisters were already chomping at the proverbial bit to get out and serve. The mission conference focused on providing service while staying safe. Yards were waiting to be cleared. Homes were waiting to be mucked. But most missionaries owned only a set or two of preparation day clothing—and those were likely impractical for the grubby, grueling work of cleaning up after a hurricane.

Soon after Hurricane Florence hit, President Holland realized the missionaries were ill-equipped for days and possibly weeks of flood relief work. So he reached out to Elder Kevin E. Calderwood.

An Area Seventy, Elder Calderwood knows from firsthand experience what missionaries require to serve on work crews. He was presiding over the New York New York South Mission in 2012 when Hurricane Sandy battered much of the Atlantic Coast.

“Elder Calderwood told me that our missionaries should not use their p-day clothes during cleanups because they would all be ruined,” said President Holland.

Fortunately, the Area Seventy knew people who were anxious to help outfit missionaries.

Following Hurricane Sandy, then-mission president Calderwood reached out to his home stake, the Oakton Virginia Stake, for help. For several years, the stake has conducted regular clothing drives for people in their community. They were skilled in gathering items quickly and efficiently.

“Now I think we can help your missionaries,” Elder Calderwood told President Holland.

A quick call was made to Oakton Virginia Stake President Scott Wheatley, who immediately volunteered to help. “We can do this,” assured the stake president.

Within days after President Wheatley asked for assistance, Oakton members were dropping off shoes, gloves, jeans, and other work clothes at the stake receiving center. The donations were then sorted by size and gender, packed in boxes, and labeled for shipping.

A local shipping company, Paxton Companies, provided a large truck and a driver, sans cost, to make the five-hour drive to Raleigh.

The Oakton members “gathered this donation in less than a week,” said Elder Calderwood.

Soon several rows of tables in the Raleigh stake center were laden with work clothes. In the end, there was more clothing items than needed. The surplus was quickly distributed to other community partners assisting with flood relief.

Now outfitted with rugged work clothes, the missionaries are eager to serve in their respective areas.

In the days prior to the hurricane, the vast majority of the Raleigh missionaries were evacuated to member homes near mission headquarters. Almost all have now returned to their apartments and will be counted among the thousands expected to participate in a sprawling Church-sponsored cleanup effort this weekend across several storm-affected cities in eastern North Carolina.

Many Latter-day Saints—and a few missionaries—got an early jump on the cleanup efforts by serving in their communities last weekend, September 22–23. Most attended Sunday services in their work clothes before heading out to help any in need.

“As I went around today, I was astounded at the devastation and yet the tender mercies of the Lord,” reported Rose Mary Abrams, Relief Society president in the Wilmington 2nd Ward, North Carolina Wilmington Stake.

Most of the trees in her community fell into yards but caused little damage to dwellings.

“There were some homes that are a total loss, and our hearts go out to them, but overall we feel truly blessed,” she said.

“Some of the stories are so sad that you want to personally go help them yourself,” she said. “You can feel how desperate they are to get help. Many I have spoken to are elderly or disabled.”

Tart said one Relief Society leader in her stake shared an observation that aptly describes the service awaiting the members in North Carolina and beyond:

“The Lord wanted us to minister. He is now teaching us firsthand how to do it.” 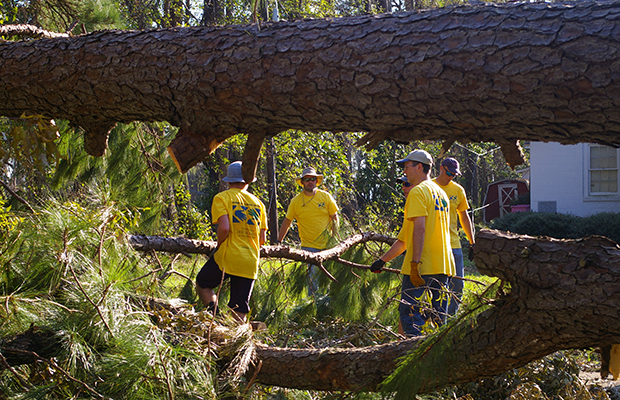 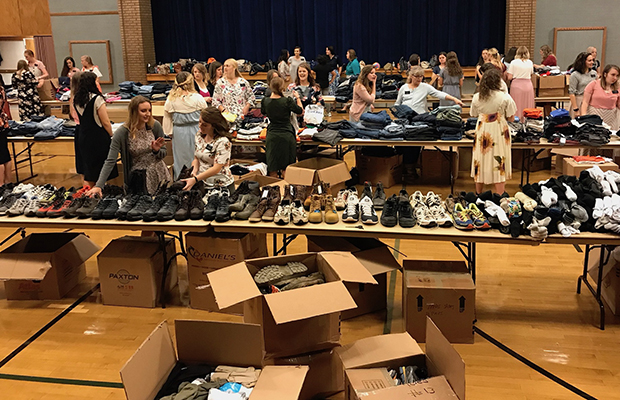