Elder M. Russell Ballard of the Quorum of the Twelve talks to Church members during a trip to Sweden, England, and France this June. He asked members to draw courage from early pioneers.

The faith manifested by early European pioneers is required now if Latter-day Saints are to move the Church and kingdom of God forward, said Elder M. Russell Ballard of the Quorum of the Twelve during a broadcast to Church members in Sweden, Denmark, Finland, and Norway.

“My brothers and sisters, I ask you, especially you who are descendants of those who gave all that they had to establish the kingdom of God once again upon the earth, what will The Church of Jesus Christ of Latter-day Saints be 20 years from now here in your countries? How will we respond to the early Scandinavian members of the Church if we cannot report that our faith, our courage, our actions were just like theirs, that we gave our best efforts to strengthen the Church in every ward, branch, stake, and district?”

The broadcast was one portion of Elder Ballard’s recent visit to Stockholm, Sweden; London, England; and Paris, France, to minister to local missionaries and Church members.

Elder Ballard began his visit on June 8 by meeting with missionaries serving in Sweden. He was accompanied by several leaders of the Church: Bishop Gérald Caussé, First Counselor in the Presiding Bishopric; Elder José Teixeira of the Seventy and President of the Church’s Europe Area; and Elder Ingvar Olsson, an Area Seventy from Sweden.

Elder Ballard spoke to the young Church members about the importance of marriage. Additionally, he emphasized that the choices they make to live according to the gospel teachings will greatly determine the future of the Church. He concluded by issuing them a challenge to either bring one person into the Church or to bring someone back to the Church by the end of the year through their own efforts. Elder Ballard instructed that what the young Church members do today to rescue and invite others will prepare the Church for what it will be in the future.

During the devotional, Bishop Caussé spoke about the story in the Bible when Jesus calms the stormy sea. He compared the Church to the boat and said the Savior is the captain of the boat. Bishop Caussé said that everyone experiences his or her own individual tempest but encouraged the young single adults to find solace by staying in the “boat” with the Savior.

“The feeling I had from listening to the conference was an overwhelmingly good one. I can’t remember the last time I felt this good. I felt even better than the day I got baptized. I was both spiritually and physically nourished,” said Thor Jonsson, a 22-year-old recently baptized member of the Church from Iceland.

Another young man also shared this same enthusiasm from the conference. Niclas Molander is a 21-year-old newly baptized member from Sweden. “Ever since I started learning about the Church, I have been fascinated with the idea of living apostles and prophets. I was especially looking forward to this conference to hear from an Apostle in person.”

In the morning of the following day, Elder Ballard addressed Church members in a Nordic conference that was broadcast to all meetinghouses in Sweden, Denmark, Finland, and Norway. The Church has 123 congregations in the Nordic countries with a membership of more than 23,400. 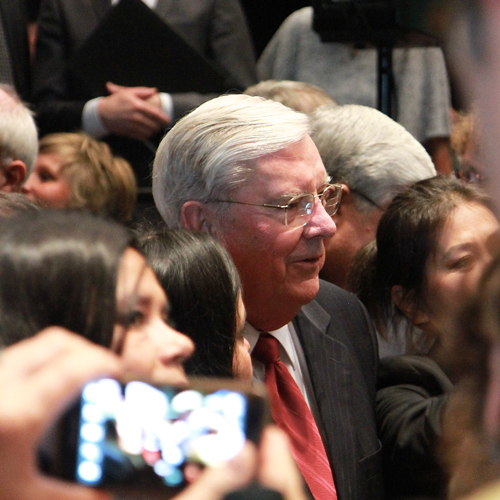 Elder M. Russell Ballard of the Quorum of the Twelve stands among members after a meeting in Sweden. He visited Europe June 8–11.

Elder Ballard spoke of the history of the Church in Scandinavia and applauded the pioneer members for their sacrifices and faith. He reminded the Nordic members of the many blessings they have thanks to those who paved the way for them. He encouraged members to look to the example of early Church members and continue living in faith.

“The Nordic countries’ contribution to establishing the Church has been remarkable,” he said. “In October of 1849, Apostle Erastus Snow was assigned to establish the Church in Scandinavia. He was accompanied by Elder Peter O. Hansen and John S. Forsgren. They established a mission headquarters in Copenhagen. Between 1850 and 1930, half of the converts in the Scandinavian Mission immigrated to the United States. Missionary work in Norway, Finland, and Sweden grew out of Elder Snow’s efforts in Denmark.”

Elder Ballard said it is hard for Latter-day Saints today to imagine the courage and faith of the early Saints from Scandinavia who boarded ships to gather to Zion. “Most knew very little English and were not really prepared for the rigors of travel aboard ship and then across the vast central plains of the United States. Some lost their lives to the early snows and freezing temperatures encountered by the Willie and Martin handcart companies.

“Their journals certainly describe the misery of life on the plains, but they also describe faith, hope, and cheerfulness. In the darkest hours there were expressions of optimism.”

During his remarks, Elder Teixeira spoke of the joy that comes through inviting friends and others to learn about the Church. 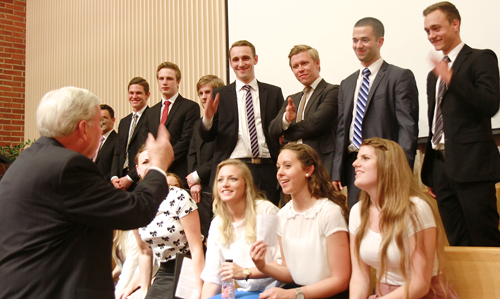 “I renew the invitation today to all within the reach of my voice: Let’s invite our family members, friends, and neighbors to experience the same joy we feel by inviting them to join us in attending sacrament meeting. Let’s assure them they will be welcomed,” said Elder Teixeira.

Elder Olsson said Elder Ballard’s visit “strengthened the Church in Sweden, in the Nordic countries, and out in Europe.

“Members, families, and friends of the Church that apply his teachings will be blessed by a renewed desire to live their covenants and share the gospel. 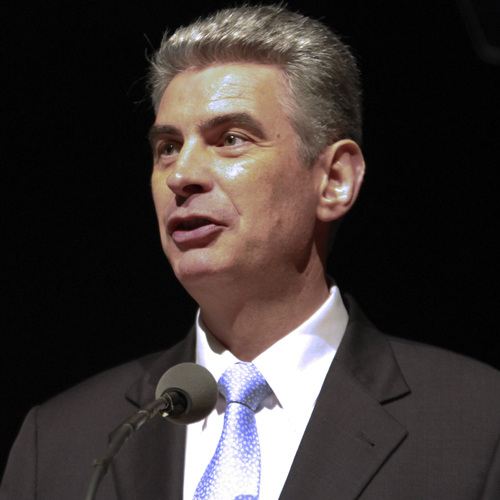 “In whatever circumstances they are in their lives, they will be blessed and have increased spiritual strength to help them have joy in their lives and build up the Lord’s kingdom.”

Following their stay in Sweden, Elder Ballard and Elder Teixeira traveled to London on June 10. There they met with missionaries serving in the London and London South Missions. Elder Ballard’s visit was significant to the missionaries because of the recent “I’m a Mormon” campaign in London. Hundreds of missionaries listened to Elder Ballard’s testimony and enthusiasm for missionary work.

On June 11, Elder Ballard traveled to France to meet with missionaries in Versailles. He also stopped to visit the site of the future Paris France Temple, which was announced by President Thomas S. Monson in the October 2011 general conference.