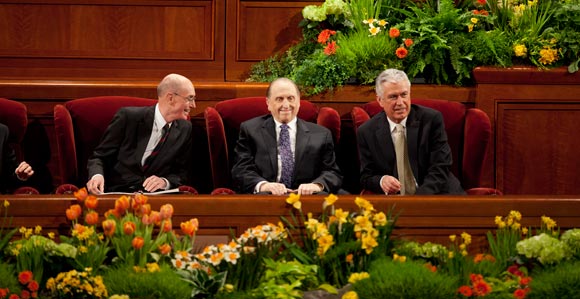 Find information and announcements from the 181st Annual General Conference of The Church of Jesus Christ of Latter-day Saints at Church News and Events (news.ChurchofJesusChrist.org).

[Editor’s Note: This article will be updated throughout each session of conference, so check back often.]

This weekend, October 1 and 2, 2011, members around the world will gather in the Conference Center, Church meetinghouses, homes, and elsewhere to participate in the 181st Semiannual General Conference of The Church of Jesus Christ of Latter-day Saints.

This earlier article lists the dates and times for the 181st Annual General Conference, along with information on broadcasts, tickets, and conference archives.

To watch or listen to past conference addresses visit the General Conference sectionof ChurchofJesusChrist.org.

During his talk, President Henry B. Eyring reminded individuals of the call—made during April general conference earlier this year—for all members to participate in a day of service during 2011.

The Book of Mormon records that when we were baptized, we promised to become charitable, President Eyring said: “Many of you participated in a day of service. . . . As you serve others for Him, He lets you feel His love. And in time, feelings of charity become part of your very nature. And, you will feel the assurance of Mormon that as you persist in serving others in life, all will be well with you.”

Read a Church News and Events article about the worldwide response to the call to serve during 2011.

Find more information about how to plan a day of service or share experiences from service projects here.

A new section of youth.ChurchofJesusChrist.org was announced during the afternoon session of general conference.

The FamilySearch Youth and Family History website, announced by Elder David A. Bednar of the Quorum of the Twelve Apostles in his October 2011 conference address, aims to help youth discover family history and serve their ancestors by seeking out their records.

“Many of you may think family history work is to be performed primarily by older people,” continued Elder Bednar in his address. However, he said, there is no age limit to starting out with family history. “You need not wait until you reach an arbitrary age to fulfill your responsibility to assist in the work of salvation for the human family.”

Read about the new site in a News and Events article.

Provo, Utah, USA
Among the new temples to be built is the announcement to rebuild the Provo Tabernacle—which was severely damaged in a fire in 2010—as the second temple in Provo. Located in Utah, USA, the Provo Tabernacle exterior will be restored to house the the 16th temple in Utah. The tabernacle was originally completed in 1898. It will relieve pressure on the existing Provo Utah Temple, one of the busiest in the Church.

Paris, France
President Monson announced that work is continuing to secure a location for the first temple in France will be located in Paris. A specific location is not announced. The first missionaries arrived in France in 1849.

Barranquilla, Colombia
With the addition of the new Barranquilla site announced today, Colombia will have two temples. The Barranquilla temple will serve 45,000 members in 15 stakes and district that cross Colombia and Venezuela.

Star Valley, Wyoming, USA
The first temple in Wyoming will be located in Star Valley and will give members in the western area of the state, who normally travel one and a half hours way to Idaho Falls or Rexburg, Idaho, a more local temple location.

Read more about the temples announced by President Monson on Newsroom.ChurchofJesusChrist.org.

“This fund provides a one-time visit to the temple for those who are otherwise not able to go to the temple yet and who long desperately for that opportunity,” he said.

President Monson added that members may contribute to the fund by writing in the information on the tithing slip that is given to bishops and branch presidents each month. Members may also donate to the temple patrons fund online through LDS Philanthropies.

“No church-built facility is more important than a temple,” President Monson said. “Temples are where relationships are sealed together to last through the eternities.”