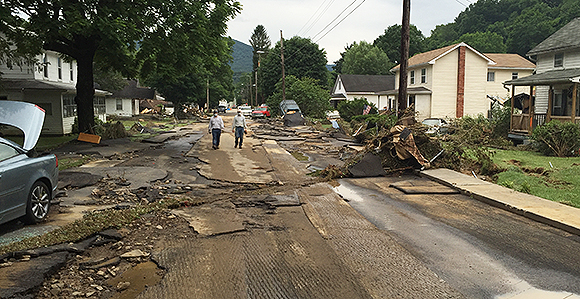 “It has been wonderful to see how people have gathered together to do a whole lot of work. We have had positive responses from people, and it has been neat to see the spiritual experiences that come from helping others in need.” —Jan-Erik Jones, president of the Buena Vista Virginia Stake

Despite major damage to homes and neighborhoods, Church members in West Virginia have been identified as safe after torrential rains tore through several communities on June 23.

More than a thousand homes have been destroyed and 23 people—including children—have died after major rainfall and flooding in West Virginia.

Heavy rain saturated areas in the state for two days, causing water levels to rise and riverbeds to overflow. Homes, buildings, bridges, and roads were destroyed, while overturned cars, large pieces of road, and other debris filled the streets of devastated communities.

Bishop Jeremiah J. Troyer of the White Sulphur Springs Ward, Buena Vista Virginia Stake, has at least seven families in his ward who have lost their homes, and many more have accrued major damages.

The Church building—located in a place likely to have flooded—was reported to be fine, but is not accessible. Despite all of the damage, Bishop Troyer is grateful no one in his ward has been reported missing or dead.

“All active and part-member families are safe,” Bishop Troyer said. “Some of our members who have been inactive for a long time we can’t get ahold of, but the immediate members are accounted for and safe.”

Although it was an extremely chaotic weekend, Bishop Troyer said there has been an outpouring of support from other wards in the stake.

“We have managed to help clean out the mud out of our members homes and some ‘Helping Hands’ have helped clean out the neighborhood,” he said. “Donations keep coming in, and … stake members have fed about 3,000 people.”

President Jan-Erik Jones, president of the Buena Vista Virginia Stake, said it has been a group effort as his stake has spent a lot of time working to help the communities that were hit the hardest.

“A lot of people have lost everything,” President Jones said. “This is highly unusual, and it is going to take a long time to recover. When everything is destroyed, where do you even start?” 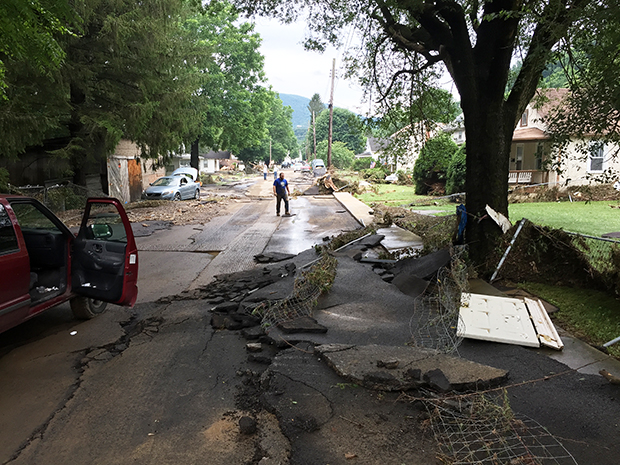 President Jones said that wards in the stake have made and served food, distributed water, and even cancelled Church meetings to help their neighbors in need. Still, many have no electricity and much work to do.

“It has been wonderful to see how people have gathered together to do a whole lot of work,” President Jones said. “We have had positive responses from people, and it has been neat to see the spiritual experiences that come from helping others in need.” 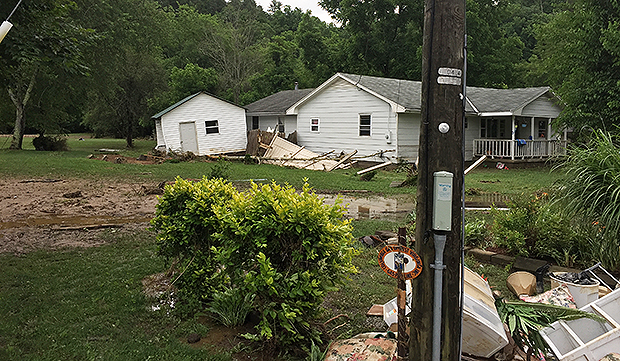 A timeline is not known for how long it will take the community to rebuild, but Church members will be involved, Bishop Troyer said.

“We are taking it a day at a time. I don’t know what has to be done or that will show up as we are cleaning up people’s homes and picking up debris,” he said. “Right now, making sure everyone is safe has been our first priority. This will take months, if not longer, to meet everyone’s needs.”