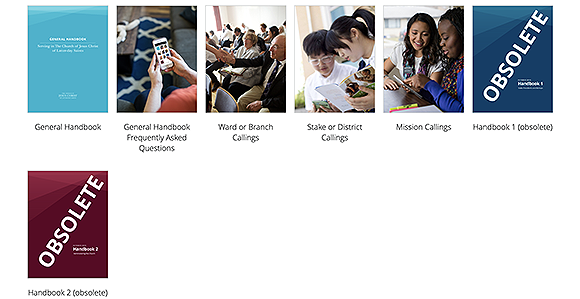 A screenshot from Gospel Library shows the new General Handbook: Serving in The Church of Jesus Christ of Latter-day Saints and the obsolete Handbook 1 and Handbook 2.

A new, universally available administrative handbook for all Latter-day Saint leaders and members has replaced Handbook 1 and Handbook 2, which the Church has now labeled “obsolete.”

The First Presidency announced the release of the handbook in a letter to general and local leaders. A key element of the new handbook is the continued emphasis of the Church on helping all come to Christ, according to the letter. Additionally, the handbook content has been organized “around Heavenly Father’s work of salvation and exaltation.”

The manual is written to help local leaders direct a global Church with members living in many circumstances. Now available in English on ChurchofJesusChrist.org and the Gospel Library app, the handbook is being translated into 51 languages.

The handbook is available to the public. “Church leaders feel there is value in allowing those who are not members to see how the Church of Jesus Christ operates in the latter days,” according to frequently asked questions that accompanied the First Presidency letter.

The new handbook focuses on the essential programs for every unit in the Church and provides adaptation options based on local needs and available resources, according to the questions.

“Many Church units around the world lack the resources to operate some Church programs that are found in larger Church units,” according to the FAQs. “Previous handbooks were written with larger units as a primary audience, often causing challenges for leaders of units with fewer resources.”

Another example of global adaptability is making the General Handbook more principle based. “As we connect leaders to the Savior and to true principles, they will be able to serve in the best way to meet local needs.”

Elder D. Todd Christofferson of the Quorum of the Twelve Apostles introduced the new handbook to General Authorities and General Officers in January, explaining how it was part of the ongoing Restoration of the gospel of Jesus Christ and reflects God’s love for His children.

“This Restoration has been and will continue to be a process of learning how to minister as Jesus would to a richly diverse world,” Elder Christofferson said during the January 30 training. “We pray this new handbook will help Church leaders use their God-given gifts to continue to bless lives in their ministry. We know there is room in this Church for everyone.”

The new handbook will be digital only. Content will be updated regularly to help leaders around the world adapt the Church’s programs, policies, and procedures to their local circumstances. The handbook will also provide flexibility to simplify Church programs, according to the First Presidency letter.

Nearly 80 percent of the content will be transferred from Handbook 1 (for stake presidents and bishops) and Handbook 2 (for all other organization leaders) and reordered in a new accessible structure.

The handbook is divided into four sections—Doctrinal Foundation, Church Organization, Work of Salvation and Exaltation, and Church Administration.

The handbook will contain 38 chapters. Nine chapters have been updated so far to reflect the new approach, and the remaining 29 chapters will be updated during 2020–2021.

Church leaders say the new chapters of the handbook are shorter and more readable and include important changes to content—including some clarifying content on moral issues. The handbook includes clarifications about priesthood authority and a new section on transgender individuals, for example.

Information in chapter 1, “God’s Plan and Your Role in the Work of Salvation and Exaltation,” is new. It explains the relationship between (1) God’s plan of happiness for His children, (2) our opportunity to participate in His work of salvation and exaltation, and (3) the purposes of the Church. Past handbooks have referred to the “threefold mission of the Church” and “divinely appointed responsibilities.” This chapter builds on those principles to outline the four aspects of God’s work with more clarity and detail:

In chapter 3, “Priesthood Principles,” the handbook teaches fundamental truths about the priesthood and incorporates recent teachings from the First Presidency and the Quorum of the Twelve Apostles about how both women and men can exercise delegated priesthood authority in their callings and assignments.

“Chapter 3 emphasizes that although men have the priesthood conferred on them and are ordained to priesthood offices, both men and women who are set apart or assigned to serve in the Church exercise delegated authority as they accomplish God’s work,” according to the FAQs. “It is important for Church members to understand that regardless of gender or calling, those who are set apart or assigned are given divine authority and responsibility to act in their callings and assignments.”

Chapter 18 highlights “Priesthood Ordinances and Blessings” and includes links and instructional videos that show how to perform ordinances and blessings. More videos will be added soon.

And chapter 32, “Repentance and Church Membership Councils,” is a significant revision of the “Church Discipline” chapter from Handbook 1. The chapter uses a more ministerial approach and voice. For example, “disciplinary councils” are now “Church membership councils.” “Disfellowshipment” is now “formal membership restrictions.” “Excommunication” is now “withdrawal of membership.” Instructions are given to bishops and stake presidents about how to compassionately help members as they repent of serious sins.