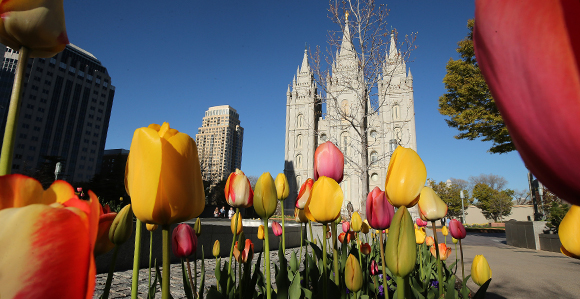 Flowers adorn the grounds of The Salt Lake Temple in Salt Lake City on Friday, April 19, 2019. Leaders of The Church of Jesus Christ of Latter-day Saints discontinued a policy Monday morning, May 6, requiring couples who marry civilly to wait one year before being sealed in the temple. Photo by Jeffrey D. Allred, Deseret News.

“We affirm that the sealing of a man and woman in the temple offers eternal blessings to the couple and their posterity that can be gained in no other way. We encourage all such couples to qualify for sealing ordinances and blessings.” —The First Presidency

Leaders of The Church of Jesus Christ of Latter-day Saints discontinued a policy Monday morning requiring couples who marry civilly to wait one year before being married or sealed in the temple. The change means Latter-day Saint couples can look forward to a temple marriage as soon as their circumstances permit.

Effective immediately, a man and a woman who have been married civilly may be sealed in the temple anytime after they receive their temple recommends for the sealing ordinance, according to a May 6 letter signed by President Russell M. Nelson and his counselors in the First Presidency, President Dallin H. Oaks and President Henry B. Eyring.

“We affirm that the sealing of a man and woman in the temple offers eternal blessings to the couple and their posterity that can be gained in no other way,” wrote the First Presidency in the letter to general and local leaders. “We encourage all such couples to qualify for sealing ordinances and blessings.”

The change in policy establishes a global standard in the Church regarding civil marriages and temple sealings, the authority to unite families eternally. Local laws in more than half the countries where the Church is established dictate a couple marry civilly before being sealed in the temple, making the scenario common outside of the United States.

The policy also allows flexibility as couples are sensitive to the needs of their families.

The First Presidency emphasized the policy change should not be interpreted as “lessening the emphasis on the temple sealing,” according to a question-and-answer enclosure accompanying the letter. “The sealing of a husband and wife in the temple is of eternal significance and a crowning experience on the covenant path,” the First Presidency wrote.

In the letter, the First Presidency asks local leaders to encourage couples, where possible, to be both married and sealed in the temple.

“Where a licensed marriage is not permitted in the temple, or when a temple marriage would cause parents or immediate family members to feel excluded, a civil marriage followed by a temple sealing is authorized,” wrote the First Presidency in the letter.

The First Presidency anticipates the change “will provide more opportunities for families to come together in love and unity during the special time of marriage and sealing of a man and woman,” according to the letter.

This was the case for Church spokesperson Irene Caso, who married her husband in 2005 in her home country of Madrid, Spain.

“We had a beautiful civil ceremony on the afternoon of December 15 at a city hall,” she recalled. “Later that day, in a more private setting, we were sealed in the Madrid Spain Temple. After going to the temple, we all celebrated with music and dance.

“Most of my immediate family and friends are not members of our faith, so it was especially meaningful for us to have them witness our civil union and help them feel included in the festivities of the day. These changes announced today will bring the same happy and memorable experience to many families throughout the Church.”

According to the First Presidency, a civil marriage ceremony performed for a couple being sealed in the temple should be “simple and dignified.” Couples may use chapels owned by the Church for these ceremonies. Members should understand the “importance and sanctity of the temple sealing so that the sealing is the central focus of the marriage and provides the spiritual basis on which the couple begins their life together,” wrote the First Presidency.

In the early days of the Church, civil marriage and temple sealing were separate. Once Latter-day Saints settled in Utah, Church leaders had the authority to perform both at the same time.

There is no specific time within which members should be sealed after being married civilly, according to the letter and accompanying information. “Priesthood leaders interview couples and provide temple recommends when the couple is both worthy and ready to be sealed in the temple. Worthy and prepared couples may be sealed as soon as circumstances permit.”

“As they prepare to receive their endowment and be sealed, they can qualify for and use a limited-use temple recommend for proxy baptisms and confirmations.” Leaders should also encourage them to do family history and gather family names for the temple, according to the enclosure.

The First Presidency closed the letter by thanking local leaders for “helping members understand, prepare for and enjoy the blessings of eternal marriage.”

The policy change is one of many in recent years reflecting a growing, global Church. Young men outside the United States had been entering the mission field at age 18 for many years before a missionary age change standardized this practice worldwide in 2012. And Church leaders are moving forward on a new global initiative for children and youth that will begin in 2020. 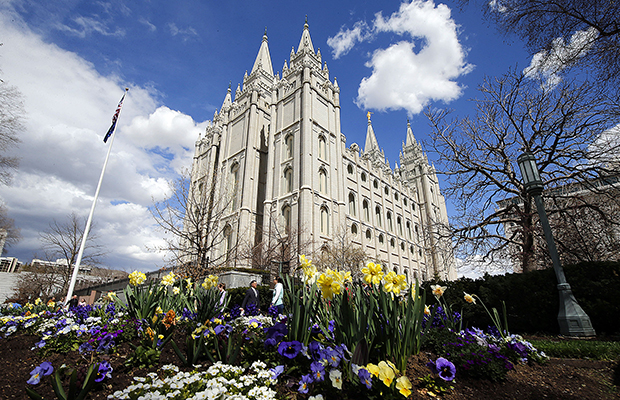